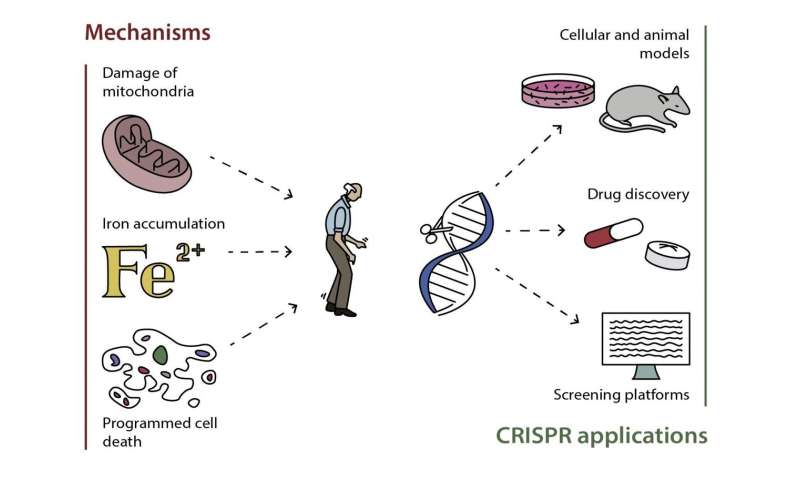 Researchers of Sechenov University and University of Pittsburgh have described the most promising strategies in applying genetic engineering for studying and treating Parkinson’s disease. This method could reveal the role of various cellular processes in progression of the disease, lead to new drugs and therapies, and determine their efficacy using animal disease models. The study was published in Free Radical Biology and Medicine.

Parkinson’s disease is a neurodegenerative disorder accompanied by a wide array of motor and cognitive impairments. It develops mostly among elderly people after the age of 55 to 60. Parkinson’s symptoms usually begin gradually and get worse over time. As the disease progresses, people may have difficulty controlling their movements, walking and talking, and taking care of themselves. Although there is no cure for Parkinson’s disease, medicines, surgical treatment, and other therapies can often relieve some symptoms.

The disease is characterized by the loss of 50 to 70 percent of dopaminergic neurons, i.e., nerve cells that synthesize the neurotransmitter dopamine. Another hallmark is the presence of Lewy bodies—oligomeric deposits of a protein called alpha-synuclein inside the neurons.

Scientists discovered several mechanisms that seem to trigger and exacerbate the development of Parkinson’s disease. In nearly 10 percent of all cases, the disease is genetically predetermined. However, in most cases, the disease is believed to involve both genetic and such environmental risk factors as taking certain drugs, or exposure to pesticides and herbicides.

The authors of the study focused on the possible causes of the disease that are related to the oxidation-reduction (redox) reactions in cells, as well as to mechanisms of cell death—apoptosis and ferroptosis. These processes were discussed in the context of direct manipulation (e.g., insertion or deletion of DNA sequences) with genetic material of living organisms or cells by applying a novel genome editing approach—CRISPR/Cas9 technology.

“Parkinson’s disease is the second-most common neurodegenerative disorder in the world, and its incidence is rising. The disease affects patients’ quality of life and imposes a significant social and economic burden on societies. CRISPR is a promising technology, a strategy to find new effective treatments to neurodegenerative diseases. The technology gives researchers ample opportunity to knock in and knock out any gene of interest to define the processes it is involved in and unearth entire metabolic pathways in order to understand the underlying mechanisms and causes of the disease. Special attention should be drawn to CRISPR editing applications for creation of cellular and animal models that fully reproduce pathological states observed in human patients, provide insights into the mechanisms underlying the disorder and are applicable for drug discovery,” says Margarita Artyukhova, co-author of the work.

The first group of mechanisms link the role of mitochondria with Parkinson’s disease pathology. Mitochondria form reactive oxygen species (ROS) that play important roles in cell signaling and homeostasis. Damage to mitochondria or disruption of their work may lead to the extensive accumulation of ROS that may cause significant damage to cell structures. Because of the danger of having damaged mitochondria in the cell, the timely elimination of damaged and aged mitochondria is essential for maintaining the integrity of the cell. This turnover is known as mitophagy. Inefficient or excessive mitophagy may contribute to neurodegeneration.

Previous studies demonstrated that animals with mutations in the genes that encode for PINK1 and Parkin, proteins essential for proper mitochondrial functioning, developed mitochondrial dysfunction, muscle degeneration and remarkable loss of dopaminergic neurons typical to Parkinson’s disease. Results from several research groups suggested that the role of these proteins could be much more complicated and may involve other partners that contribute to the execution and regulation of mitophagy, thus, the time for implementing genome editing to manipulate them is yet to come. However, there are several other proteins and lipids that impact mitophagy and mitochondrial function (DJ-1, alpha-synuclein, Fbxo7, and cardiolipin), and CRISPR/Cas9 can be used to search for yet unknown genes and their protein products involved in the disease progression and development. Moreover, generation of animal and cellular models with various mutations in mentioned genes will help to define the role of corresponding proteins in the disease pathology and make them targets for drug discovery.

The second group of cellular processes is related to iron homeostasis. A certain amount of iron and ROS is important for a proper functioning of the cell, thus, the disruption of this balance may cause a chain of harmful and pathological alterations that affect crucial cellular processes. Iron can accumulate in brain tissues of elderly people and animals, in particular, in the areas of the brain responsible for motor and cognitive functions. It was shown that a high level of iron in one of these areas (substantia nigra) is accompanied by death of dopaminergic neurons. Furthermore, interaction between dopamine and iron can promote the production of toxic metabolites that cause damage to mitochondria and trigger aggregation of alpha-synuclein in neurons. The scientists also examined tau protein, transferrin, transferrin receptor, ferroportin, and amyloid precursor protein, proteins involved in iron import and export within the neurons. CRISPR/Cas9 could help researchers to develop drugs that will normalize iron homeostasis in affected tissues.

The third group of processes reviewed in the article are cell death programs, apoptosis and ferroptosis. During apoptosis, proteins and DNA of the cell are broken up with special enzymes, and the cell itself disintegrates. Ferroptosis follows the iron-dependent oxidation of specific lipid classes; the products of oxidation accumulate and poison the cell. Both apoptosis and ferroptosis play roles in the development of neurological diseases, speeding up the death of dopaminergic neurons. In this case, CRISPR/Cas9 will be useful in detailed studies of cell death pathways that promote Parkinson’s disease-associated loss of dopaminergic neurons as well as in the regulation of specific enzymes and proteins that are involved in the execution of these cell death programs.

Functional analysis of genome, a powerful approach to gain comprehensive information on the entire genome, helped researchers to obtain many of these results, and has already proved its efficiency in research on schizophrenia, bipolar disorder and autism spectrum disorder. Paired with CRISPR/Cas9, it can contribute to the understanding of genetic basis of Parkinson’s disease, promote generation of individual cellular and animal models as well as design of new drugs and treatment approaches.