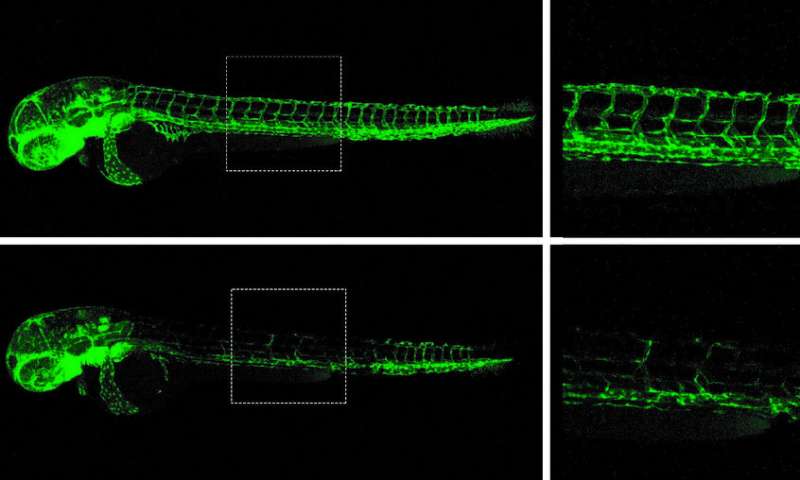 Many diseases are caused by genetic defects. However, their severity can vary among individual patients, so that even mild forms can occur. Scientists at the Max Planck Institute for Heart and Lung Research in Bad Nauheim have now decrypted a molecular mechanism responsible for this phenomenon. Accordingly, the mRNA of the defective gene ensures that related genes are activated thereby compensating the defect. The researchers hope to make use of this mechanism for therapeutic approaches.

Defective genes are responsible for a number of serious illnesses. One example is cystic fibrosis showing severe symptoms due to a defective protein. This malformation in turn is caused by a defect in the coding gene. The responsible genes for most this kind of diseases have been tracked previously.

As an experimental approach to assess the function of individual genes, researchers often modify genes, e.g. by introducing mutations. However, such a modification does not always have an effect on the organism. For instance, experiments in animal models frequently show that the expected effect does not occur after a genetic switch-off of genes. The causes are largely unknown. One possible explanation is that if a gene product fails, its tasks are taken over by other, similarly acting proteins. Understanding the molecular mechanisms that can lead to this kind of compensation for the failure of individual genes is thereby a very important question.

Scientists at the Max Planck Institute for Heart and Lung Research in Bad Nauheim have now used advanced tools like CRISPR to decipher such a molecular machine. The consequences of a genetic defect are thereby mitigated by related genes, which are now increasingly active. “Based on data from previous studies, we assumed that a defect in a gene could result in related genes being more active in expressing their gene products. These proteins, which are related to the original protein, would then take over its tasks,” explains Mohamed El-Brolosy, a member of Didier Stainier’s department and first author of the study. “A complex molecular machinery is behind this genetic compensation.” Stainier’s group has now been able to decipher the complex processes using experiments on mice and zebrafish.

The Bad Nauheim scientists investigated zebrafish that had mutations in different genes. “We started by looking at many different mutations in specific genes and found that not all were equal,” El-Brolosy states. The ones that tended not to show abnormalities had something in common: El-Brolosy and his co-workers found that in these mutants increased amounts of mRNA of other members of the gene families were produced. “When we provided functional protein back into these mutants, it did not have an effect on the increased transcription levels of the other potentially compensating members of the gene families. From these and other results we concluded that the trigger was not the faulty proteins,” according to El-Brosoly.

It turned out that the mRNA was always unstable in mutants that did not show abnormalities. “Our data indicated that in these cases the mutant mRNA was more rapidly broken down,” said El-Brolosy. From this and other observations, the Bad Nauheim researchers concluded that mRNA is signaling on a second level. “Our data indicated that the mutant mRNA was signaling to other, non-mutated genes to take over.”

This hypothesis was tested in a rather elegant and powerful way, when by means of an additional genetic engineering approach, it was no longer possible to generate mutant mRNA. “Since there was no mutant mRNA, there was also no one to signal to the other genes. In consequence, we did not see compensation in these animals,” said El-Brolosy. With seemingly dramatic effects: For example, the development of blood vessels in zebrafish embryos with a relevant mutation was disturbed only if the mutant mRNA was missing. If, as mentioned earlier, the mutant mRNA was present, the vessels developed normally, because the related genes became more active. “We propose that the molecular machinery that normally ensures that only flawless proteins are formed has a second essential function: it helps to activate related genes as an alternative to the defective gene, thereby compensating for the genetic defect,” Stainier concludes.