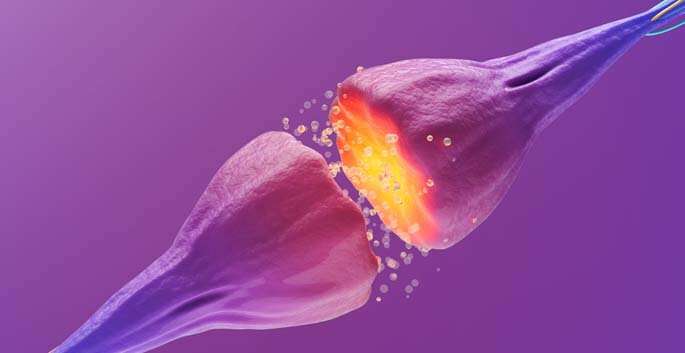 The release of neurotransmitters and hormones in the body is tightly controlled by complex protein machinery embedded in cell membranes.

Manipulating that machinery with drugs could improve treatment of disorders ranging from diabetes to Parkinson’s disease. Progress has been slow, however, because of the lack of an animal model to test the effects of potential drugs. Until now.

In a paper featured on the cover of the journal Science Signaling, the researchers reported that when they disabled the shut-off valve in nerve cells in the brains of mice through genetic manipulations, the animals exhibited significant deficits in motor coordination, cognitive and other behaviors.

Scientists know how to modulate SNARE and turn on the neurotransmitter “spigot.” But until now, they had no idea what might happen if they did.

“We can now investigate that more thoroughly with this animal model,” Hamm said. “So many things that couldn’t be looked at before or were really hard to (study)—now they’re going to be easier to look at.”

Hamm is the Aileen M. Lange and Annie Mary Lyle Professor of Cardiovascular Research in the Vanderbilt University School of Medicine. Former chair of the Department of Pharmacology, she also is a professor of Ophthalmology & Visual Sciences and of Orthopaedic Surgery & Rehabilitation.

During her career she has made several important discoveries about G-protein coupled receptors (GPCRs). Embedded in the membranes of nearly every cell, GPCRs are the most common conduit for signaling pathways found in nature. Two-thirds of all drugs target them.

GPCRs are turned on and off by G-proteins inside the cell. G proteins consist of two subunits—alpha and beta/gamma—both of which can stimulate independent signaling pathways.

Several years ago, Hamm and colleagues including Simon Alford, Ph.D., at the University of Illinois at Chicago, showed how the beta/gamma subunit of an inhibitory G protein prevents intracellular vesicles containing neurotransmitters from fusing to the cell membrane and spilling their contents into the extracellular space between nerve cells—the synapse.

It does this in two ways: by preventing the flow of calcium through “calcium channels” from allowing vesicles to fuse to the membrane and by “switching off” the SNARE receptor complex.

Hamm wanted to know why there are two separate mechanisms for “damping down” neurotransmitter release. “We studied this regulation through SNARE intensively in cell culture,” she said, but didn’t know how it functioned in living organisms.

Using a genome editing technology called CRISPR/Cas9, Zack Zurawski, then a graduate student in Hamm’s lab, introduced a mutation that didn’t let the beta-gamma subunit turn off the SNARE machinery anymore. The mutation turned on the “spigot.”

“It’s amazing that it worked the first time,” Hamm said. “It used to take two or three years to make such a mouse and we did it in three months. It was really a great achievement.”

Zurawski, the first author on the paper, has since earned his Ph.D. and is conducting post-doctoral research at the University of Illinois with Alford, a senior co-author.

The researchers also discovered that the two mechanisms for preventing vesicle fusion, one that acts on calcium channels and the other on SNARE, are synergistic. Blocking both results in a more powerful inhibition of neurotransmitter release than blocking one or the other separately.