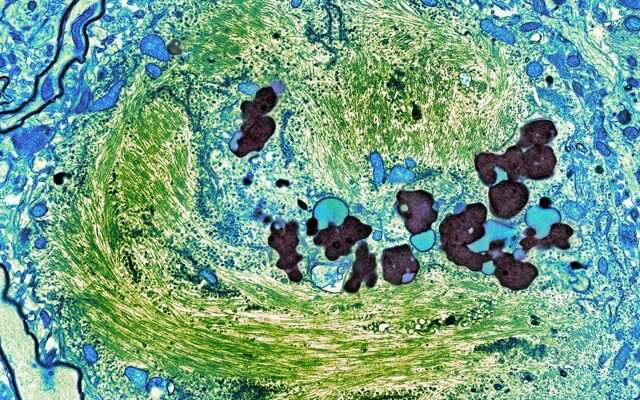 The accumulation of amyloid beta (Aβ) plaques and tangles of a protein called tau in the brain are hallmarks of Alzheimer’s disease (AD). Much effort has focused on the former, with many attempts made to prevent, slow or even reverse the presence of Aβ, and thus ameliorate the development of AD. To date, results have been mixed.

In a new paper, published in the January 24, 2019 online issue of Cell Stem Cell, researchers at the University of California San Diego School of Medicine, in collaboration with colleagues in San Diego and The Netherlands, focused on the alternative therapeutic target: tau.

Using induced pluripotent stem cell-derived (iPSC) neurons from AD patients, the researchers report that cholesteryl esters (CE)—the storage product for excess cholesterol within cells—act as regulators of tau. Importantly, through screening of more than 1,600 Food and Drug Administration-approved drugs they found that low doses of the anti-HIV drug efavirenz lowered CE through activation of the neuronal enzyme “CYP46A1”, thereby reducing tau in the AD-patient neurons.

iPSCs are derived from skin cells that have been reprogrammed back into an embryonic-like pluripotent state, then induced to develop as a specific type of cell, in this case neurons.

“Our findings reveal that CE act on tau, which means more options and new possibilities for therapeutic intervention,” said senior author Lawrence S.B. Goldstein, Ph.D., Distinguished Professor in the Department of Cellular and Molecular Medicine and scientific director of the Sanford Consortium for Regenerative Medicine. “Identification of the CYP46A1-CE-tau axis means we have a druggable target, and a potential therapeutic pathway in early AD.”

The cause or causes of AD are not fully known or understood, involving genetics and environmental factors. There is some evidence that a predisposition to AD may arise from altered cholesterol metabolism, a major constituent of the human brain. Although the brain represents only 2 percent of total body weight in humans, it contains 20 percent of the body’s cholesterol. It serves as an important component of cell structure and function.

When healthy cholesterol metabolism in the brain is altered, there are consequences, among them the accrual of CEs, which regulate tau. Tau accumulation and aggregation are strongly associated with development of AD. In healthy brain cells, tau protein helps form microtubules that serve as molecular roadways needed to transport nutrients. In AD brains, the tau protein forms abnormal aggregates called neurofibrillary tangles, causing the neurons to malfunction and die.

The researchers also confirmed previous reports that lowering CE prevents the formation of amyloid. Amyloid precursor protein or APP is produced at high levels in the brain, which uses it in a variety of neuronal functions. Aβ plaques contain large amounts of abnormal snippets of APP. In a healthy brain, these snippets are broken down and eliminated. In AD brains, they accumulate into insoluble plaques that are thought to contribute to the malfunction and death of neurons.

Preventing or eliminating the accumulation of Aβ plaques, particularly in the early stages of AD development, has long been the focus of massive scientific efforts and numerous pharmaceutical trials, but these efforts have not yet resulted in effective and approved therapies for AD. Currently, the only approved therapies for AD manage behavioral symptoms, but do not slow or delay disease progression. There is no cure yet.

In the new research, Goldstein, with co-first authors Vanessa Langness, a Ph.D. graduate student in Goldstein’s lab, and Rik van der Kant, Ph.D., a senior scientist at Vrije University in Amsterdam and former postdoctoral fellow in Goldstein’s lab, used iPSC-derived neurons from AD patients to create cellular models of the disease, both familial and sporadic types. They found that CE are upstream of both Aβ and tau, thus providing a target that could prevent the abnormal build-up of both proteins simultaneously.

In addition, they discovered that CE prompts build-up of Tau even in the absence of Aβ, indicating that simply removing Aβ from the brain—the goal of many AD drug development efforts—would not be sufficient to stop the disease.