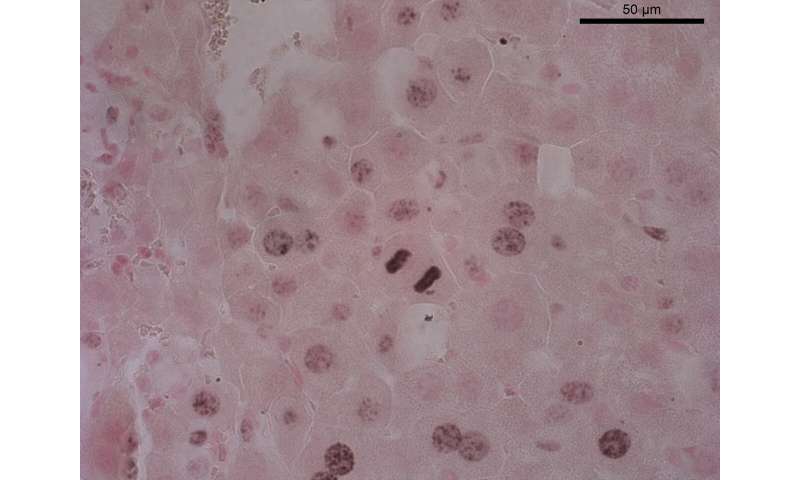 An enzyme involved in cell stress responses could become a new pharmacological target in the treatment of liver cancer, a disease that currently has few available treatment options. The research team at the Centro Nacional de Investigaciones Cardiovasculares (CNIC) led by Guadalupe Sabio has discovered that the protein p38γ, one of the four types of p38 kinase, is essential for the initiation of cell division in liver cells. This indicates that “p38γ could be a useful therapeutic target for liver cancer,” says Sabio, adding, “We are now developing inhibitors of this protein to test in this cancer.” The study has been published today in Nature.

National data on cancer rates in Spain for 2017 show that liver cancer is detected in an estimated 5,862 people every year (4252 men and 1610 women), making it the seventh-most common cancer among men and the 17th most common among women. In line with figures for the European Union, the incidence of liver cancer in Spain is approximately 12 in every 100,000 men and 3.5 in every 100,000 women.

Sabio has a long-standing interest in the p38 family of proteins, which are activated in cells exposed to stress. Now, in the study published in Nature, her team has shown an important role for p38γ in the initiation of cell division in the liver.

“The four members of the p38 kinase family are so similar that at first they appear to have overlapping or redundant functions,” says Sabio. “But detailed analysis of their three-dimensional structures thanks to collaborations with Silvia Osuna at the University of Girona and investigators at the Centro Nacional de Investigaciones Oncológicas (CNIO) revealed that one of the four, p38γ, also shares close similarities with another family of proteins called CDKs. These proteins are well-known regulators of cell division and the cell cycle and play a well-established role in the development of cancer.”

In laboratory studies exploring this similarity to CDKs, the team found that an inhibitor of CDK2 also reduced the activity of p38γ. The researchers also found that p38γ and CDK2 both act on a tumor suppressor protein that plays a central role in the regulation of the cell cycle.

To test whether p38γ is implicated in cell division, study first author Antonia Tomás-Loba examined the outcome of chemically inducing liver cancer in mice that lack the enzyme. The results were truly promising: “in mice lacking p38γ or treated with inhibitors to block its activity, the development of hepatocellular carcinoma was slowed,” says Tomás-Loba.