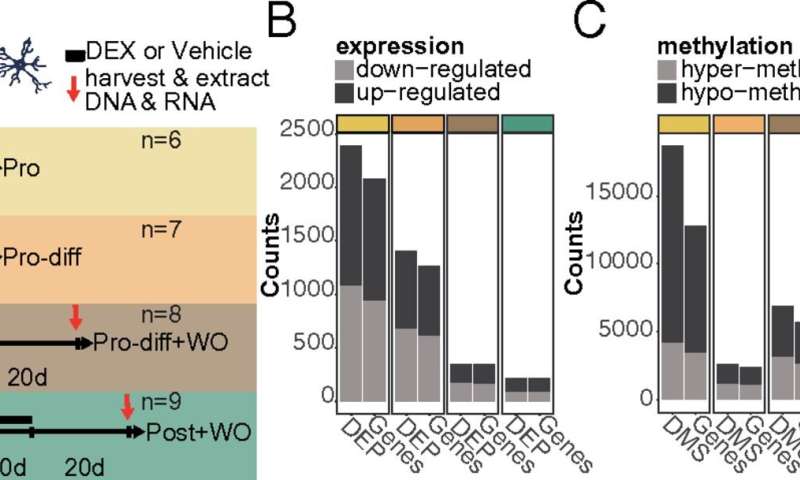 Simon Fraser University assistant professor Nadine Provençal and researchers from the Max Planck Institute of Psychiatry in Germany have identified a “cellular memory” that could help explain how fetal exposure to stress during pregnancy affects how we respond to stress exposure later in life.

“The prenatal period is one of the most dynamic and sensitive periods in a person’s life,” says Provençal. “Prenatal stress experienced by the mother during pregnancy not only impacts the mother’s health but can also impact her developing fetus. Our research demonstrates an association between the epigenetic mark, or cellular memory, and an increased response to stress hormones, which could help to explain why some individuals are more vulnerable to stress later in life.”

Provençal and a team of researchers from around the world exposed human neurons to high levels of stress hormones, comparable to that experienced by the fetal brain during incidents of prenatal stress. The researchers observed that the developing neurons exposed to stress hormones had epigenetic marks on their genes that remained even after the stress hormones were removed. Interestingly, these epigenetic modifications also appear to act as a form of “cellular memory,” causing the mature neurons to be even more responsive to future stress.

To translate their findings from the lab to the cells of living people, the researchers studied the umbilical cord blood cells of newborns exposed to maternal stress, including maternal depression and anxiety, as well as stress hormone analogues administered to women with a risk of premature delivery. They observed a significant overlap between the epigenetic marks in neurons and those observed in the newborns’ genes exposed to maternal stress—findings that supported their earlier discovery.