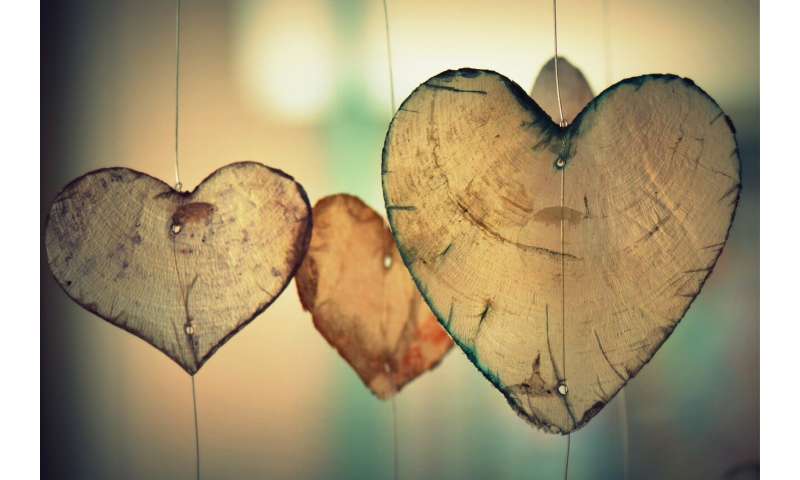 Love can make us do crazy things. It often prompts us to behave in counterintuitive ways, like, for example, placing the wellbeing of our loved ones above our own.

Such altruism has perplexed and intrigued scientists for centuries. A new study out of UC Santa Barbara explores how an individual’s genetics and brain activity correlate with altruistic behaviors directed toward romantic partners. The team found that pathways related to bonding in other animals showed up in humans, and may be involved in altruism more generally. The results appear in the journal Behavioral Neuroscience.

Scientists currently think that altruism evolved in social species as a strategy for ensuring the survival of relatives. The idea is that genes that promote altruism will persist, perhaps not through an individual’s children but through those of their kin, who carry similar genetics. In this way, providing for your relatives ensures some of your own genes are passed down.

For humans, with our complex social systems, this basic premise takes on new dimensions. “It would make sense that people would be particularly invested in the wellbeing of their partners because they want to live long, happy, healthy lives together,” said Bianca Acevedo, a research scientist at UC Santa Barbara’s Neuroscience Research Institute, and the paper’s lead author. “And in the case of newlyweds, some of them will want to have children. So being selfless towards their partner is an investment in their offspring.”

Altruism is an important aspect of pair bonding, but according to Acevedo, it hasn’t been examined much—especially when compared to the bond between parents and their children, where altruism is critical. “Responding to a child in a selfless way is such an important piece of care-giving,” said Acevedo.

Phenomena as nuanced as love and altruism involve a lot of chemistry. Oxytocin is a neurotransmitter that has taken hold in popular consciousness as the “cuddle hormone.” And while it’s involved in a variety of processes, it’s role in trust, empathy and bonding is well established. Less well known is the hormone vasopressin, which scientists have also connected with pair bond behaviors.

Acevedo’s team recruited newlywed couples to investigate how a person’s genetics and brain activity correlate with the empathy they show toward their romantic partner. The team tested each participant for two genetic variants, one involved in oxytocin sensitivity and another connected to vasopressin sensitivity. The researchers then had them respond to a standardized questionnaire asking about their feelings toward their partner and other individuals. This gave them a measurement of each person’s general levels of empathy and altruism toward their partner.

Then the participants entered a functional magnetic resonance imaging (fMRI) machine. Though similar to the standard MRI machines doctors use to image soft tissue, fMRIs can track changes associated with blood flow. This allows researchers to see how different parts of the brain activate in response to different types of stimuli. In this case, participants were shown pictures of their romantic partners, friends and strangers with different facial expressions. The researchers explained what the person in the picture was feeling and why, in order to elicit an emotional response.

When participants felt a strong sense of empathy with the person in the picture, regions of the brain associated with emotion and emotional memory lit up. “It’s almost like the brain is responding in a way that signals, ‘this is important, pay attention,'” said Acevedo.

These areas of the brain—like the amygdala and ventral pallidum—have a particularly dense concentration of receptors for oxytocin and vasopressin, further implicating these neurotransmitters in empathy and altruism. What’s more, individuals with genetic variations that made them more sensitive to these hormones exhibited stronger emotional responses across the board.

The researchers also found that brain regions that activated specifically in response to a partner’s face were the same regions that are critical in other animals during studies of pair bonding and attachment. This suggests that our brains have pathways devoted specifically to attachment-related behaviors, pathways which may be quite old. However, some of these attachment pathways showed activity even when participants saw strangers’ faces, providing evidence of the intricate notions of empathy and altruism at play in humans.

Acevedo is continuing to investigate empathy, altruism and care-giving in different types of couples. She’s currently exploring how mind-body activities like yoga influence how individuals respond to partners struggling with memory problems.

“It’s important that we’re thinking about these systems and these behaviors beyond romance,” said Acevedo. “When people think about relationships, they tend to think of romantic love as being really important. But we’ve forgotten some of the other basic and important reasons that people are together, like to take care of each other.