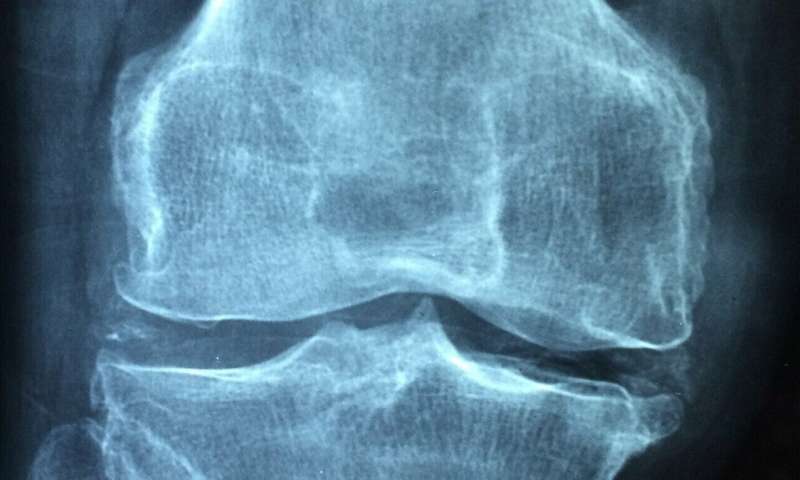 A team of researchers from the Netherlands, the U.S. and the U.K. has found evidence that suggests tumor necrosis factor (TNF) cannot be used as a biomarker for rheumatoid arthritis (RA) treatment discontinuation. In their paper published in the journal Science Translational Medicine, the group describes developing an assay that could be used to quantify TNF concentrations in RA patients taking a TNF inhibitor. They also describe their use of the assay to determine whether TNF levels could be used as a means for determining when to discontinue the inhibitor.

Rheumatoid arthritis is an inflammatory disease that results in joint pain and damage. It impacts millions of people around the world—currently, there is no cure. There are treatments, however, meant to lessen pain and damage. One such treatment is administration of a drug called adalimumab. Scientists have found that it inhibits TNF, which is a protein that plays a role in inflammation events. Unfortunately, people have been found to respond differently to adalimumab, which has made it difficult for health care workers to know when to discontinue prescribing it for patients. In this new effort, the researchers report that they have overcome that problem by developing an enzyme-linked immunosorbent assay for accurately measuring TNF in patients taking adalimumab.

After much testing to determine the assay’s reliability, the researchers explored whether measuring TNF levels could be used as a marker for determining when patients could stop taking adalimumab. They collected blood samples from 193 RA patients who were treated with adalimumab one month after the start of treatment, and then again at four months, seven months, 10 months, one year and 18 months.