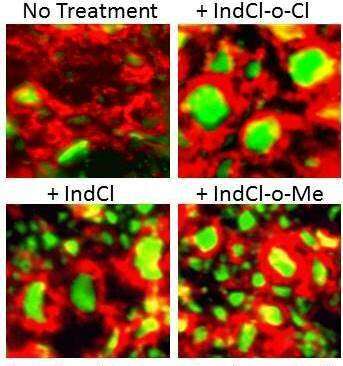 Multiple sclerosis is an autoimmune disease that affects more than 2.3 million people worldwide. This debilitating condition periodically shutters communication between the brain and other parts of the body, resulting in symptoms that range from numbness and tingling in the arms and legs to blindness and paralysis. While treatments are available to alleviate inflammation, no therapies exist to protect neurons or repair the degraded myelin sheath that normally surrounds nerves.

Previous studies have shown that estrogens and estrogen-like compounds reduce multiple sclerosis-like inflammation and disability in mice. At first glance these treatments appear promising, but they carry a host of negative side effects, from feminizing male mice to increasing the risk of cancer, heart disease and stroke. An interdisciplinary team of scientists have piggy-backed on this approach with a new concept that side steps the negative side effects while alleviating symptoms.

In a paper published on January 24 in Scientific Reports, Seema Tiwari-Woodruff, an associate professor of biomedical sciences in the School of Medicine at University of California, Riverside, and her colleagues detail their efforts to create new forms of the drug chloroindazole, or IndCl, a compound that acts on a subset of estrogen receptors. Their work shows that these new compounds offer the protective effects of estrogen without the unpleasant side effects.

“Multiple Sclerosis is a complicated disease with multiple disease aspects ¾ inflammation, demyelination and neuron death,” said Tiwari-Woodruff, a corresponding author on the paper. “We believe we created a drug that does two things really well, modulating inflammation and allowing axon remyelination. No other drug on the market can do these two things simultaneously.”

Tiwari-Woodruff turned to her colleagues at the University of Illinois Urbana-Champaign, or UIUC, to develop the new forms, or analogues, based on the parent molecule, chloroindazole.

John Katzenellenbogen, a research professor, and Sung Hoon Kim, a research scientist, both in the Department of Chemistry at UIUC, began by adding various chemical groups to the backbone of the parent molecule to produce 20 analogues. These functional analogues have similar physical, chemical, biochemical and pharmacological properties as chloroindazole, but interact with estrogen receptors in subtly different ways.

“Our question was can we modify the parent compound to produce a better drug that would be more effective in human trials,” Tiwari-Woodruff said.

Tiwari-Woodruff and her team screened these chloroindazole analogues in cell culture to identify the most promising candidates. They identified two ¾IndCl-o-Cloro and IndCl-o-Methyl. Moving into preclinical testing, they examined the therapeutic effect of the two analogues using a mouse model (experimental autoimmune encephalomyelitis) that mimics the symptoms of multiple sclerosis. They found these compounds performed better in reducing disability and encouraging remyelination than the parent compound without any noticeable side effects.

According to Tiwari-Woodruff, this family of compounds has potential for future therapeutic development, especially for the protection for neurons and myelin nerve covering. She stresses that more work is necessary to explore the effect of the analogues at different doses and given at different stages of the disease.

The scientists in the study have patented the analogues and hope to begin extensive pharmacological and toxicity testing soon. After these analyses, the drug can be evaluated during clinical trials to determine safety and effectiveness in treating multiple sclerosis in people. Tiwari-Woodruff is hopeful that these new compounds have the potential to reach the market in the next few years.