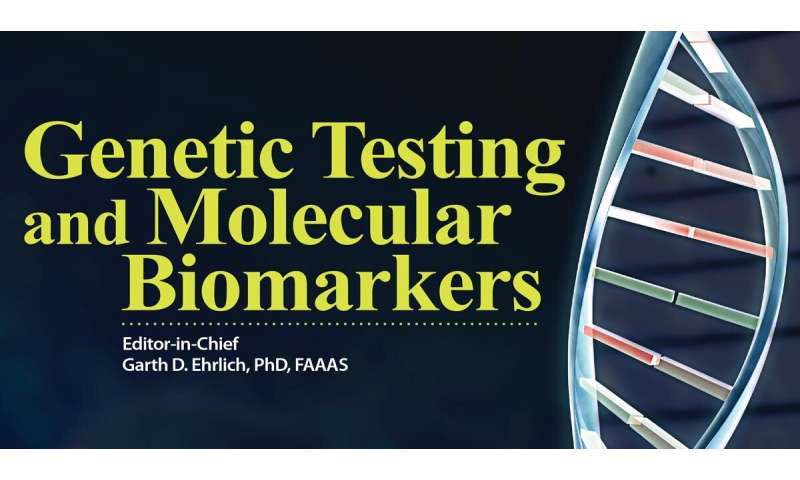 The promise and challenges of liquid biopsy, an emerging, noninvasive method for targeted disease diagnosis and detection of cancer biomarkers to enable improved and personalized therapy, is the focus of a new special issue of Genetic Testing and Molecular Biomarkers.

Under the leadership of Guest Editor Ying-Hsiu Su, Ph.D., The Baruch S. Blumberg Institute, Doylestown, PA, this special issue on liquid biopsy includes an extensive range of original research articles that demonstrate the exciting potential of this novel technology. Liquid biopsy, in which disease biomarkers are detected in bodily fluids, offers a noninvasive alternative to tissue biopsy. It makes it easier to monitor cancer progression more frequently, allowing clinicians to modify therapeutic regimens as tumors evolve to adapt to their environment and develop resistance to existing treatments. However, much more research is needed to understand fully the value and appropriate use of liquid biopsy.

Featured in this special issue is the article entitled “Detection of BRAFV600E Mutation in Melanoma Patients by Digital PCR of Circulating DNA” by Tatiana Burjanivova, Ph.D., Commenius University in Bratislava, Jessenius Faculty of Medicine in Martin, Slovakia and coauthors from this institution and University Hospital in Martin. The researchers demonstrated that droplet digital PCR is a highly sensitive method for detection the BRAFV600E genetic mutation—present in about 50% of melanomas—which is a good therapeutic target. The digital PCR technique detects the mutation in circulating cell-free DNA shed by the melanoma tumor into the blood.

In another example of how liquid biopsy can detect a cancer biomarker, Hui Kang, Ph.D., and colleagues from The First Affiliated Hospital of China Medical University, Shenyang, contributed the article “Identification of an Exosomal Long Noncoding RNA SOX2-OT in Plasma as a Promising Biomarker for Lung Squamous Cell Carcinoma.” Here, the researchers concluded that the long noncoding RNA SOX2-OT, which is released into the blood in fatty packets called exosomes, is present in significantly higher levels in patients with lung squamous cell carcinoma. Furthermore, in these patients there was a significant correlation between SOX2-OT levels and tumor size, stage of disease, and metastasis of the cancer to nearby lymph nodes.

Another article evaluated the use of liquid biopsy in prenatal testing for the diagnosis of trisomy 21 (Down syndrome). In the article entitled “Application of Differentially Methylated Loci in Clinical Diagnosis of Trisomy 21 Syndrome,” was coauthored Li Xiao, Ph.D., Second Affiliated Hospital of Soochow University, Suzhou, China and colleagues from this institution and Southern Illinois University, School of Medicine, Springfield, IL. An evaluation of different sets of fetal-specific methylation markers and the use of quantitative polymerase chain reaction (qPCR) led to the identification of combined marker set that could be highly sensitive, specific, cost-effective, and noninvasive prenatal screening tool to detect trisomy 21.