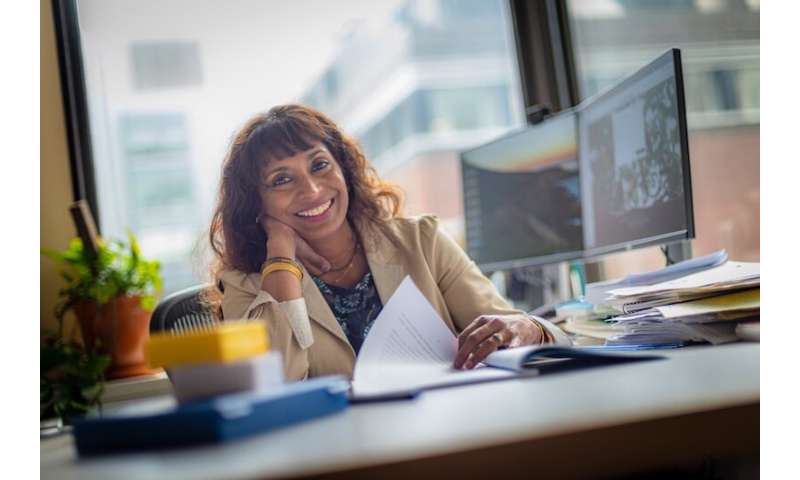 Like a Russian bot corrupting U.S. elections, or a new prime minister wreaking havoc in the U.K., a protein named BORIS is showing itself to be a malevolent player in some childhood cancers. New research fingers BORIS as a culprit that can hack the neuroblastoma genome, rousing the cancer cells from dormancy after certain types of treatment, and allowing the cancer to relapse.

The work, published last month in Nature and led by Rani George MD, Ph.D., at the Dana-Farber/Boston Children’s Cancer and Blood Disorders Center, also implicates BORIS in drug resistance in several other cancers.

When a cell needs to switch on a particular gene, the long chromatin fibers in which our DNA is packaged form loops. These chromatin loops bring gene promoters and gene enhancers together in close proximity, enabling a gene or group of genes to be turned on and expressed. In neuroblastoma, the study found, BORIS forms and anchors new loops, turning on many genes at once. And not in a good way.

Children’s cancers may be especially vulnerable to BORIS’s action. Unlike adult cancers, they are rarely caused by DNA mutations. Instead, they typically arise as a result of epigenetic influences, including factors that alter chromatin loops and modify the expression of important genes. Epigenetic factors also contribute to drug resistance.

George and colleagues began by treating human neuroblastoma cells with drugs that inhibited its one known targetable mutation, in the gene ALK (discovered by George a decade ago) until the cells became ALK-resistant. The resistant cells also had increased copies of MYCN—an oncogene that helps drive neuroblastoma and portends a poor prognosis, but which cannot be targeted directly.

To better understand how resistance develops, the team then performed single-cell RNA sequencing on drug-sensitive, partially resistant, and fully resistant neuroblastoma cells to see what genes were being turned on and off in each cell state.

That’s when they discovered two things.

“As we treated the cells with ALK inhibitors, some regressed to a more primitive state, expressing a number of self-renewal factors,” says George. “After staying dormant in that state for a while, they began to recover and proliferate. That’s when BORIS appeared.” 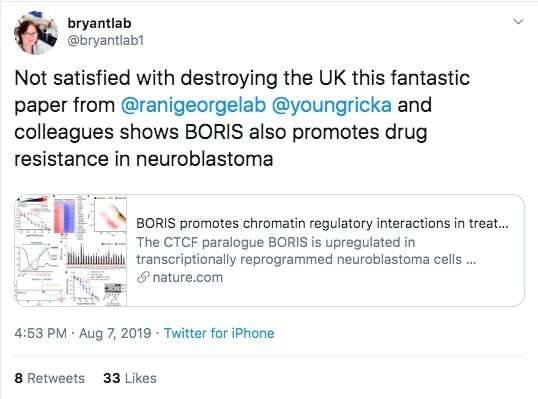 RNA sequencing showed that the tumor cells that had emerged from dormancy—and began proliferating again—were making large amounts of BORIS. The cells still carried ALK mutations and had increased DNA copies of the MYCN oncogene. But the cancer no longer needed those to grow.

“The cells had evolved to a completely different phenotype,” says George. “They were nothing like the original neuroblastoma cells. The mutated ALK gene wasn’t expressed at the protein level, and even though the cells had 50 to 100 copies of the MYCN oncogene, these were not being expressed either.”

Instead, driven by BORIS, the cells were turning on a host of factors usually seen in early neural tissue.

“We found that overexpression of BORIS in neuroblastoma correlates with a poor patient outcome,” says George.

The team went on to look at gene expression in other cancers. In Ewing sarcoma, glioblastoma, non-small-cell lung, breast, and ovarian cancers, BORIS expression was higher in recurrent, treatment-resistant cancers versus their low-risk counterparts.

George and her colleagues are now beginning to seek ways to target BORIS. The Nature paper provides clues that inhibiting a protein called BRD4, which works together with BORIS to promote gene expression, could curb the growth of tumors in which BORIS is active, to a greater extent than neuroblastomas not expressing BORIS.

At first glance, BORIS didn’t seem to be a likely cancer target. Normally, it is expressed only during embryonic development, and is later found only in testes and ovary cells. But it’s been popping up in a growing number of studies, raising questions about what it is doing.

“We discovered a previously unidentified role for BORIS,” says George.

An avid reader of detective novels, she likens her team’s research to a forensic investigation.

“Someone you never suspected can turn out to be the culprit,” she says. “Then the burden is to prove your case to the scientific ‘jury’ of your peers.”