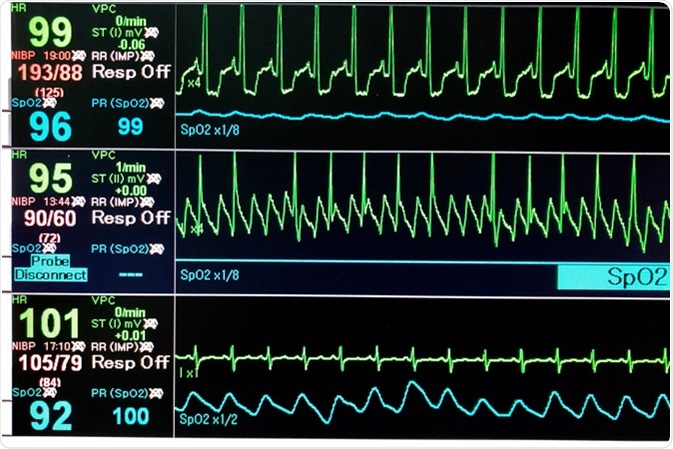 The conduction system of the heart

The conduction system of the heart includes the SA node, AV node, bundle of His, bundle branches, and Purkinje fibers.

In a normal heart, electrical conduction initiates in the sinus node, which is a group of specialized cells located in the upper right portion of the heart. Sinus node is also referred to as the natural pacemaker of the heart due to its ability to spontaneously initiate the electrical impulses that leads to the contraction of the heart.

What are the causes of infantile bradycardia?

Bradycardia can be caused by dysfunction of certain intrinsic factors of the heart or irregularities in the heart’s conduction system. Bradycardia can also develop by external factors acting on a normal heart, such as the use of certain medications.

What are the signs and symptoms of infantile bradycardia?

Most children with sinus bradycardia are asymptomatic i.e. present with no particular symptoms.  The appearance of symptoms depends on the severity of the bradycardia, any related heart problems and the child’s age.

Infants may present with symptoms such as failure to thrive or arrested physical growth. The child may also express exhaustion with feeds – refuses feeds or may be too tired for feeds. The older child may feel excessively fatigued or tired, especially during exercising or physical activity.

How is infantile bradycardia diagnosed?

Thyroid function tests should be done to check out for hypothyroidism – a common cause of bradycardia.  Assessment of arterial blood gasses can help to detect acidosis and hypoxemia.

Cardiac electrophysiology studies may be required in some cases to detect the abnormal heartbeat or an area of abnormal heart tissue.

What are the treatment options for infantile bradycardia?

Treatment options for infantile bradycardia depend on the underlying cause.

Bradycardia associated with a complete heart block requires the use of an artificial pacemaker.

Symptomatic patients are treated with drugs such as atropine or isoproterenol. If metabolic acidosis is the cause of bradycardia, the origin of acidosis needs to be determined and corrected. Bradycardia causes by hypothyroidism may necessitate thyroid replacement medication.

Asymptomatic patients require to be monitored closely and underlying causes of the bradycardia should be corrected.