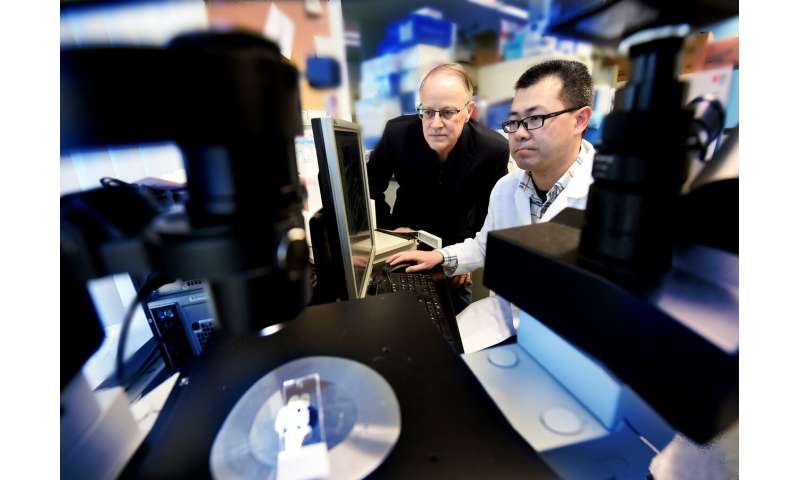 Estrogen in the brain is important to keep neurons communicating and memories being made, scientists report.

Neurons in both males and females make estrogen and the scientists have shown that when they don’t, their brains have significantly less dense spines and synapses—both key communication points for neurons—in the biggest part of their brain, called the forebrain.

“We think this shows estrogen has a clear role in synaptic plasticity, how the neurons communicate and in memory,” says Dr. Darrell Brann, interim chair of the Department of Neuroscience and Regenerative Medicine at the Medical College of Georgia at Augusta University.

Brann and his colleagues found that mice whose neurons don’t make estrogen have impaired spatial reference memory—like a baseball player not knowing where home plate is and what it means to get there—as well as recognition memory and contextual fear memory—so they have trouble remembering what’s hazardous—they report in the Journal of Neuroscience.

Restoring estrogen levels to the brain area rescues these impaired functions, Brann and his colleagues report.

It was known that aromatase, the enzyme that converts testosterone to estrogen, was made in the brain’s hippocampus and cerebral cortex in a variety of species that includes humans, Brann says, and that they all can have memory deficits when aromatase is blocked. Patients who take an aromatase inhibitor for estrogen-dependent breast cancer also have reported memory problems.

So for these studies in mice, they knocked aromatase out of the forebrain, which includes the hippocampus, which has a role in making long-term memories and spatial memory, and the cerebral cortex, which is important to memory, attention, awareness and thought.

They depleted aromatase only in the excitatory neurons—called excitatory because they help make some action like a thought happen—in the forebrain as a way to focus on the role of estrogen produced by these brain cells.

The bottom line was a 70-80 percent decrease in aromatase and estrogen levels in the neurons in these areas of the brain. The other bottom line: “The knockout mice can’t remember as well as the normal mice,” Brann says.

They put male and female mice through extensive behavioral testing. They included mice that also had their ovaries removed as a control, to ensure that no circulating estrogen ended up in the brain.

Electrophysiological studies of slices of the estrogen-altered brain showed that while long-term potentiation—which is the process by which synapses strengthen to form a memory—worked, it didn’t function to nearly the same degree. But, putting an equivalent estrogen directly onto slices of the hippocampus restored that ability within minutes.

Knocking out aromatase also decreased expression of CREB, a major transcription factor known to play a key role in learning and memory, the scientists write, as well as neuron-nourishing brain derived neurotrophic factor, or BDNF.

Despite the cognitive defects, the scientists only saw depression-like behavior in the animals with their ovaries removed, and movement and anxiety levels were normal in all the mice.

The scientists say these findings implicate neuron-derived estrogen as a novel neuromodulator, basically a critical messenger one neuron relies on to communicate with others, which is essential to key functions like cognition.

“It’s direct genetic evidence of this role and I think that is important to have,” Brann says.

Neuromodulators need to be created and released quickly, Brann says, which is how estrogen gets produced in the brain. We all have basal levels that can be rapidly induced when needed, he adds.

It’s likely glutamate, the brain’s most abundant excitatory neurotransmitter, which is essential to learning and memory, that prompts the neurons’ production of estrogen, Brann adds.

Meanwhile astrocytes, another brain cell type that nourishes and otherwise nurtures neurons, only seem to make estrogen in response to injury. In that scenario, it’s likely cytokines, substances secreted by immune cells to also make something happen, that prompt supportive astrocytes to start production, say the scientists who have another project looking specifically at astrocytes.

The scientists are now creating double knockouts, where aromatase is depleted in both neurons and astrocytes, since the wellbeing of these two brain cell types is connected. Interestingly, the neuron’s estrogen production may drop in response to injury while the astrocyte’s production steps up. Brann notes that appears to be yet another way, astrocytes protect neurons.

There are many blanks left to fill in before the natural process will be understood so treatment potential could be explored, he says. That includes learning more about what is regulating brain aromatase, whether brain estrogen levels decrease with normal aging and, if they do, what could be used to increase aromatase and estrogen production in the brain, Brann says.

Estrogen, presumably produced by the ovaries, has long been considered to protect premenopausal women from cardiovascular disease, including stroke.

Brain estrogen also appears to give a bit of an edge to females because, while memory deficits occurred in both sexes when its production was impaired, deficits were more significant in the females, Brann notes.