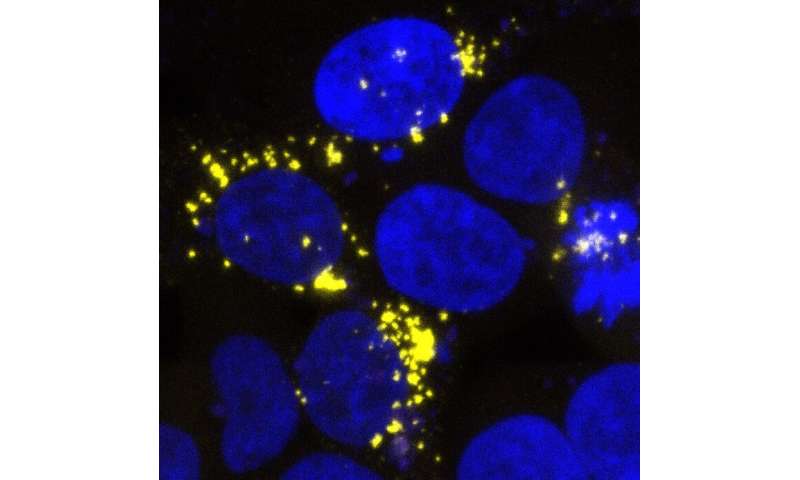 Two proteins central to the pathology of Alzheimer’s disease act as prions—misshapen proteins that spread through tissue like an infection by forcing normal proteins to adopt the same misfolded shape—according to new UC San Francisco research.

Using novel laboratory tests, the researchers were able to detect and measure specific, self-propagating prion forms of the proteins amyloid beta (A-β) and tau in postmortem brain tissue of 75 Alzheimer’s patients. In a striking finding, higher levels of these prions in human brain samples were strongly associated with early-onset forms of the disease and younger age at death.

Alzheimer’s disease is currently defined based on the presence of toxic protein aggregations in the brain known as amyloid plaques and tau tangles, accompanied by cognitive decline and dementia. But attempts to treat the disease by clearing out these inert proteins have been unsuccessful. The new evidence that active A-β and tau prions could be driving the disease—published May 1, 2019 in Science Translational Medicine—could lead researchers to explore new therapies that focus on prions directly.

“I believe this shows beyond a shadow of a doubt that amyloid beta and tau are both prions, and that Alzheimer’s disease is a double-prion disorder in which these two rogue proteins together destroy the brain,” said Stanley Prusiner, MD, the study’s senior author and director of the UCSF Institute for Neurodegenerative Diseases, part of the UCSF Weill Institute for Neurosciences. “The fact that prion levels also appear linked to patient longevity should change how we think about the way forward for developing treatments for the disease. We need a sea change in Alzheimer’s disease research, and that is what this paper does. This paper might catalyze a major change in AD research.”

Prions are misfolded versions of a protein that can spread like an infection by forcing normal copies of that protein into the same self-propagating, misfolded shape. The original prion protein, PrP, was identified by Prusiner in the 1980s as the cause of Creutzfeldt Jakob Disease (CJD) and spongiform bovine encephalopathy, also known as Mad Cow Disease, which spread through consumption of meat and bone meal tainted with PrP prions. This was the first time a disease had been shown to infect people not by an infestation of an organism such as a bacterium or a virus, but through an infectious protein, and Prusiner received a Nobel Prize for that discovery in 1997.

Prusiner and colleagues have long suspected that PrP was not the only protein capable of acting as a self-propagating prion, and that distinct types of prion could be responsible for other neurodegenerative diseases caused by the progressive toxic buildup of misfolded proteins. For example, Alzheimer’s disease is defined by A-β plaques and tau tangles that gradually spread destruction through the brain. Over the past decade, laboratory studies at UCSF and elsewhere have begun to show that amyloid plaques and tau tangles from diseased brains can infect healthy brain tissue much like PrP, but considerably more slowly. 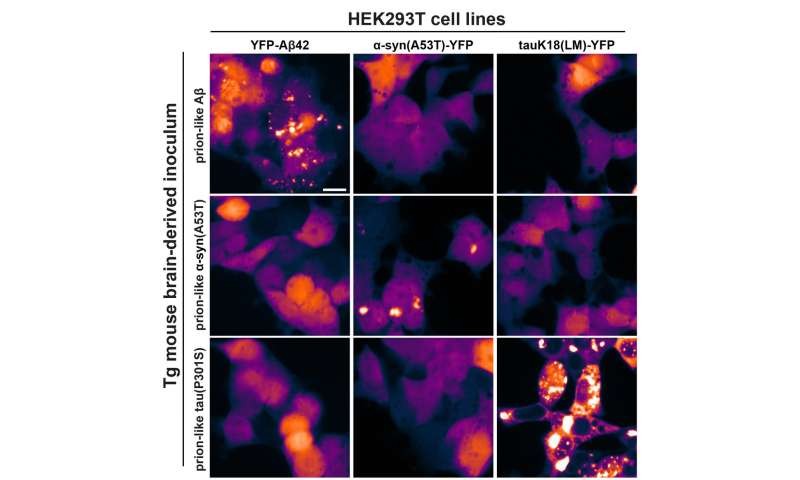 Many scientists have been reluctant to accept that A-β and tau are self-propagating prions—instead referring to their spread as “prion-like”—because unlike PrP prions, they were not thought to be infectious except in highly controlled laboratory studies. However, recent reports have documented rare cases of patients treated with growth hormone derived from human brain tissue, or given transplants of the brain’s protective dura mater, who went on to develop A-β plaques in middle age, long before they should be seen in anyone without a genetic disorder. Prusiner contends that these findings argue that both Aß and tau are prions even though they propagate more slowly than highly aggressive PrP prions.

In response to these debates, Prusiner likes to quote from a 1969 lecture by neuroscientist Bernard Katz: “There is a type of scientist who, if given the choice, would rather use his colleague’s toothbrush than his terminology!”

In the new study, the researchers combined two recently developed laboratory tests to rapidly measure prions in human tissue samples: a new A-β detection system developed in the Prusiner lab and a tau prion assay previously developed by Marc Diamond, Ph.D., a former UCSF faculty member who is now director of the Center for Alzheimer’s and Neurodegenerative Diseases at UT Southwestern Medical Center.

Unlike earlier animal models that could take months to reveal the slow spread of A-β and/or tau prions, these cell-based assays measure infectious prion levels in just three days, enabling the researchers to effectively quantify for the first time the levels of both tau and A-β prions in processed extracts from post-mortem brain samples. In the new study, they applied the technique to autopsied brain tissue from over 100 individuals who had died of Alzheimer’s disease and other forms of neurodegeneration, which was collected from repositories in the United States, Europe, and Australia.

In assays comparing the samples from Alzheimer’s patients with those who died of other diseases, prion activity corresponded exactly with the distinctive protein pathology that has been established in each disease: in 75 Alzheimer’s disease brains, both A-β and tau prion activity was elevated; in 11 samples from patients with cerebral amyloid angiopathy (CAA), only A-β prions were seen; and in 10 tau-linked frontotemporal lobar degeneration (FTLD) samples, only tau prions were detected. Another recently developed bioassay for alpha-synuclein prions only found these infectious particles in the seven samples from patients with the synuclein-linked degenerative disorder multiple system atrophy (MSA).

“These assays are a game-changer,” said co-author and protein chemist William DeGrado, Ph.D., a professor of pharmaceutical chemistry and member of the UCSF Cardiovascular Research Institute, who contributed to the design and analysis of the current study. “Previously Alzheimer’s research has been stuck looking at collateral damage in the form of misfolded, dead proteins that form plaques and tangles. Now it turns out that it is prion activity that correlates with disease, rather than the amount of plaques and tangles at the time of autopsy. So if we are going to succeed in developing effective therapies and diagnostics, we need to target the active prion forms, rather than the large amount of protein in plaques and tangles.”

In particular, when compared to measurements of overall tau buildup—which is known to increase with age in Alzheimer’s brains—the researchers found a remarkable exponential decline in the relative abundance of the prion forms of tau with age. When the researchers plotted their data, they saw an extremely strong correlation between tau prions and patients’ age at death: relative to overall tau levels, the quantity of tau prions in the brain of a patient who died at age 40 were on average 32 times higher than in a patient who died at 90.

“I still remember where I was sitting and what time of day it was when I first saw this data over a year ago,” said co-author and leading neurodegeneration researcher William Seeley, MD, a professor of neurology at the UCSF Memory and Aging Center who directs the UCSF Neurodegenerative Disease Brain Bank, which provided tissue used in the study. “I’ve very rarely, if ever, seen this kind of correlation in human biological data. Now the job is to find out what the correlation means.”

The research raises a number of questions that will need to be addressed by future studies, including whether differences in prion infectivity could explain the long-standing mystery of why Alzheimer’s progresses at such different rates in different patients. Other open questions resulting from the research include whether higher prion levels in brain samples from younger patients are linked to the early onset of the disease or how quickly it progressed, and whether lower prion levels in older brains reflect less “infective” prion variants or instead some ability of these patients’ brains to dispose of misfolded proteins.

The evidence that prion forms of A-β and tau play a specific role in Alzheimer’s disease—one that cannot be captured by simply counting amyloid plaques and tau tangles in patient brains—also raises questions on current approaches to Alzheimer’s diagnosis, clinical trial design, and drug discovery, say the authors, who hope their novel assays will spur renewed interest in developing therapies to target the now-measurable prion proteins.