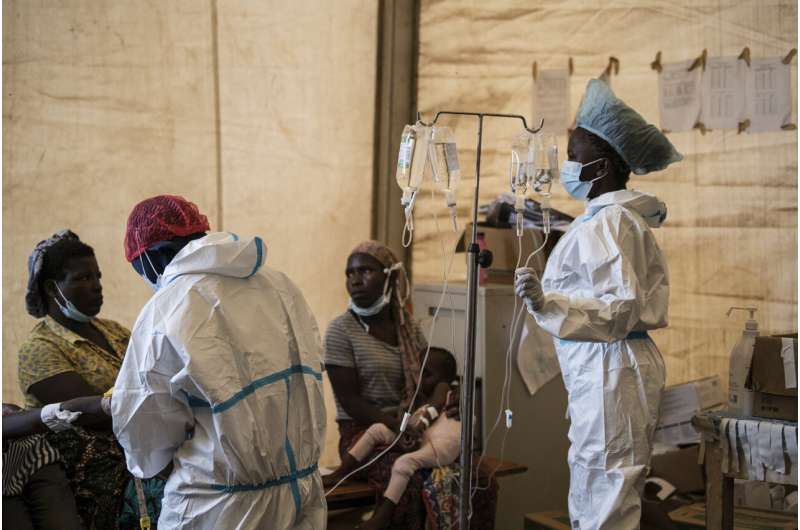 The worst cholera outbreak to affect Malawi in two decades has now claimed 750 lives, a government minister said, while the World Health Organization chief described the southeast African country as among the hardest-hit amid ongoing global epidemics that are “more widespread and deadly than normal.”

Malawi’s Health Minister Khumbize Kandodo Chiponda on Thursday ordered the closure of many businesses that lack safe water, toilets and hygienic refuse disposal facilities, and announced restrictions on the sale of pre-cooked food.

“We continue to record rising number of cases across the country, despite signs of reduced transmission and deaths in a few areas,” Chiponda said in a statement, and urged adherence to sanitation and hygiene measures.

On Wednesday, Chiponda said 17 people had died from 589 new cases of the waterborne disease “in the past 24 hours.” She said the country has recorded 22,759 cases since the onset of the outbreak in March last year.

Figures show that about 15 people have been dying daily in recent days, with 155 deaths recorded in the past 10 days. Nearly 1,000 people were hospitalized as of Wednesday.

This week, WHO Director-General Tedros Adhanom Ghebreyesus said 31 countries have reported cholera outbreaks since December, a 50% increase over previous years.

“While we have had large cholera outbreaks before, we have not seen such a large number of simultaneous outbreaks,” Tedros said, adding that Malawi, along with Haiti and Syria, are among the worst-affected countries.

Last year, the WHO and its partners switched to a single dose of the standard cholera vaccine instead of the usual two doses, due to supply problems.

“Production is currently at maximum capacity, and despite this unprecedented decision, the stockpile remains very low,” Tedros said, adding that four more countries have asked for vaccines in the past few weeks.

The WHO has previously blamed the unprecedented global surge in cholera on complex humanitarian crises in countries with fragile health systems that are being aggravated by climate change. Warmer temperatures and increased rains make it easier for the bacteria that cause cholera to multiply and spread.

Africa CDC director Ahmed Ogwell Ouma told reporters during a weekly online briefing on Thursday that 14 African countries are reporting cholera cases, many of which are due to flooding across the continent. A significant proportion of the continent’s 1.3 billion people lack access to safe water, sanitation and good hygiene.

Ouma said 393 deaths from slightly more than 4,000 new cases were reported during the past week in Africa, where Malawi is the outbreak’s epicenter.

The country of about 20 million people recorded 71% of cases and 88% of deaths in the past week, said Ouma.

In the capital, Lilongwe, some people blamed lack of basic services such as safe water and sanitation for the outbreak.

“I was eating and drinking in the markets without washing my hands. I was not cautious, but also there is no water in these places” said 24-year-old Kondwani Malizani, a motor mechanic from the crowded Ngwenya Township in Lilongwe. He said he was hospitalized with cholera last week.

Lilongwe and Blantyre city, an economic hub in the south of the country, are most affected. Many public places such as busy markets have no tap water, while people are forced to dig wells at home or draw water from unsafe sources such as rivers and streams—factors that contribute to cholera outbreaks.

Epidemiologist Adamson Muula told the AP that the outbreak is affecting “the very poor” who lack access to safe water and sanitation.

“People who have functioning water closets, potable water from taps in homes and those who fortify themselves by not eating from questionable places are basically not at risk,” said Muula, a lecturer at Kamuzu University of Health Sciences in Blantyre. He blamed ruling elites for failing to invest in infrastructure.

“People who are not served by the municipal water supply system. People who defecate in bushes and other open spaces, drink from open water sources and those who live in communities where the different water companies can fail to provide tap water for days on end are the ones affected,” said Muula. “Such a disease becomes difficult to control as the bourgeois feel unconcerned.”

She also said the government plans to expand the water pipe network as well as to deliver water using trucks to people living in slums in Lilongwe and Blantyre. Schools in the two areas whose opening was delayed in early January are set to reopen on Jan. 17. This is after the government pledged to provide safe drinking water and reconnect piped water that had been discontinued at some schools in Lilongwe and Blantyre, Chiponda said.

In November, the WHO and partners sent Malawi nearly 3 million cholera vaccines. Cholera is an acute diarrheal disease spread via contaminated water and food which can cause severe dehydration. It is a bacterial disease that affects both children and adults. If left untreated, up to 30% of cholera cases can be fatal and in extreme cases, the disease can kill within hours.

© 2023 The Associated Press. All rights reserved. This material may not be published, broadcast, rewritten or redistributed without permission.