Eczema sufferer, 43, claims BEER triggered a flare-up which left her ‘addicted’ to steroid creams that severely burnt her skin and left it so hot ‘you could fry an egg on it’

A woman claims she developed an extreme eczema flare-up after sipping a beer on holiday.

Maria Marzaioli, 43, would occasionally suffer dry patches around her mouth and in the creases of her elbow as a child.

But during a trip to Tuscany in 2015 she woke with her eyes and face swollen and unbelievably itchy, which she puts down to the wheat in the beer she drank the night before.

Once home in Hove, East Sussex, doctors prescribed her a series of topical steroid creams, which she became ‘addicted’ to. She even claims the skin on her neck was ‘burning’ so severely you could have ‘fried an egg’ on it.

Unable to take the irritation much longer, the office worker shaved her head in the hope it would give her some relief.

It was not until Ms Marzaioli did some online research that she came across topical steroid addiction, which caused her to ditch the creams for good in March 2016.

After years of agonising flare-ups, Ms Marzaioli is finally on the road to recovery.

The NHS lists food allergies, including wheat, as a potential trigger of an eczema flare-up. Ms Marzaioli has since cut out wheat, although it is unclear if she has an intolerance to it, as well as sugar, dairy and alcohol. 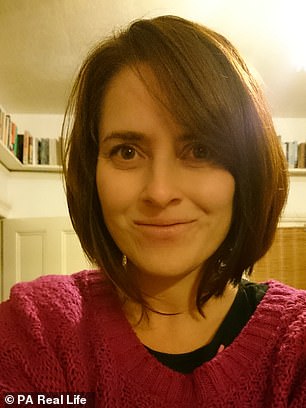 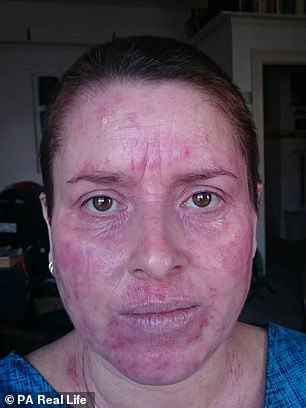 Maria Marzaioli (left before) claims she developed eczema after sipping a beer on holiday. Once home, she was prescribed steroid creams, which left her with burning skin. Deciding to ditch the ointments in 2016, she is pictured right during a withdrawal flare-up last year

Ms Marzaioli was diagnosed with a mild form of eczema as a child, however, the condition was always very manageable.

‘At around 14, things got more noticeable, but I was also much more sensitive about my face and how I looked at that age,’ she said.

From around 21 years old Ms Marzaioli used the steroid cream hydrocortisone every few years when her skin suffered a bad flare-up.

However, things took a dramatic turn for the worse during her trip to Italy.

‘I’d drank a wheat beer the night before and woke in the morning with my face and eyes swollen,’ Ms Marzaioli said.

‘There was no question in my mind the beer was the cause. It was the only thing I’d had that was significantly different to what I normally ate and drank.

‘I also remember having similar reactions a couple of times to wheat beers when I was younger.’

Wheat contains the protein gluten, which is also found in barley and rye. Research has shown those with coeliac disease, who are unable to tolerate even an iota of gluten, are around three times more likely to develop eczema.

Although unclear exactly why this occurs, some scientists consider eczema an autoimmune condition – like coeliac disease – which causes a sufferer’s immune system to attack their healthy tissue.

This may cause both disorders to lower the proteins required for a healthy immune system. 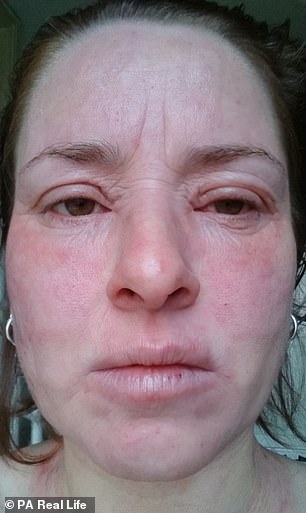 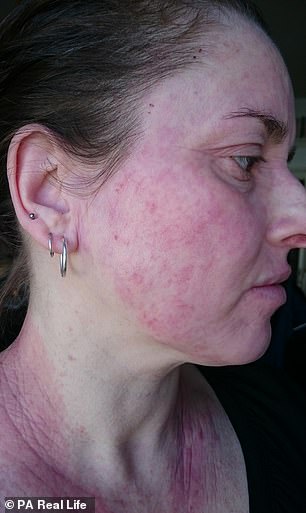 Ms Marzaioli is pictured left in December 2015, while still using steroid creams, which caused her to be ‘covered in dry red patches’. She is pictured right the following February. Ms Marzaioli claims the skin on her neck was burning so severely you could ‘fry an egg on it’ 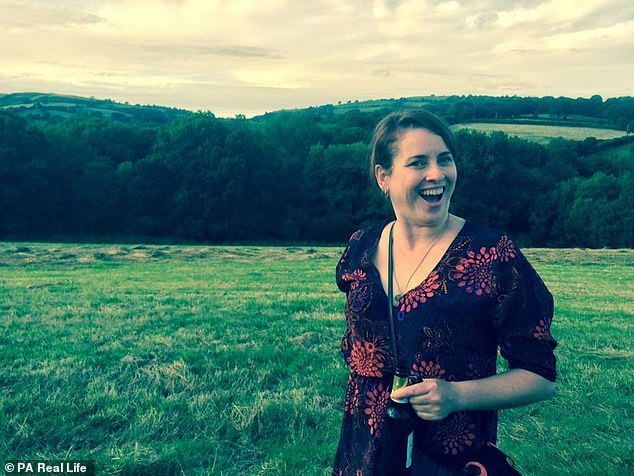 Before the ordeal (pictured) Ms Marzaioli was happy and often played the violin at gigs. She later found being on stage left her hot and sweaty, which triggered severe itching

Both wheat and barely contain the protein gluten, which is also found in rye.

Research has shown those with coeliac disease, who are unable to tolerate even an iota of gluten, are around three times more likely to develop eczema.

Although unclear exactly why this occurs, some scientists consider eczema an autoimmune condition – like coeliac disease – which causes a sufferer’s immune system to attack their healthy tissue.

This may cause both disorders to lower the proteins required for a healthy immune system.

The NHS also lists food allergies, including wheat, as a potential trigger of an eczema flare-up.

Some eczema patients have reported a gluten-free diet eases their symptoms.

Around 15-to-25 per cent of coeliac patients develop the severe skin rash dermatitis herpetiformis (DH).

DH is similar to eczema in that it causes extremely itchy and blistering skin.

Alcohol can also cause eczema flare-ups by drying out the skin and dilating the blood vessels.

This causes susceptible skin to become red, itchy and uncomfortable.

Ms Marzaioli initially tried to treat her symptoms with antihistamines and moisturising creams, however, they made little difference.

Her symptoms cleared up at first before returning with a vengeance once she was back in the UK.

‘I went to the doctor and that triggered a cycle of being prescribed steroid creams, them eventually stopping working, then going back to get higher dosage ones,’ Ms Marzaioli said.

‘My skin was getting worse and worse. Dry, red patches spread all down my back, chest and neck. My entire top half, aside from my hands, was covered.

‘At my worst, I would regularly wake with my eyes swollen shut and blood all over my sheets from scratching during the night.

‘Red patches spread everywhere, and I was incredibly hot and itchy. You could have fried an egg on my neck.

‘I slept with cotton gloves on and wore compression bandages to try and stop me from itching. I couldn’t even be cuddled because my skin was so sore.’

‘I had been playing the violin in a few different bands, but once it started I found I’d get so hot and sweaty on stage that it prompted uncontrollable itching attacks,’ she said.

‘I’d often have to go straight home and dunk myself into a cold bath, and even had to quit one of the bands, which was devastating.’ 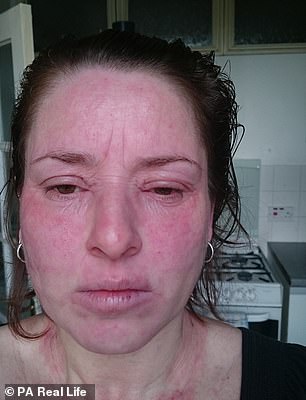 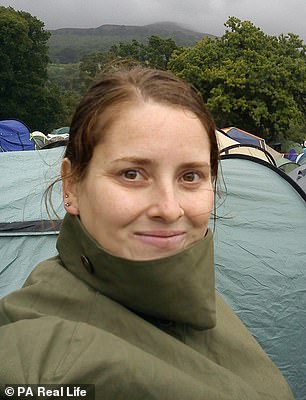 Pictured left in December 2015, Ms Marzaioli would wake with swollen eyes and sometimes even blood on her sheets from scratching in the night. Pictured right before the ordeal, Ms Marzaioli had occasional bouts of eczema, however, they were always very manageable 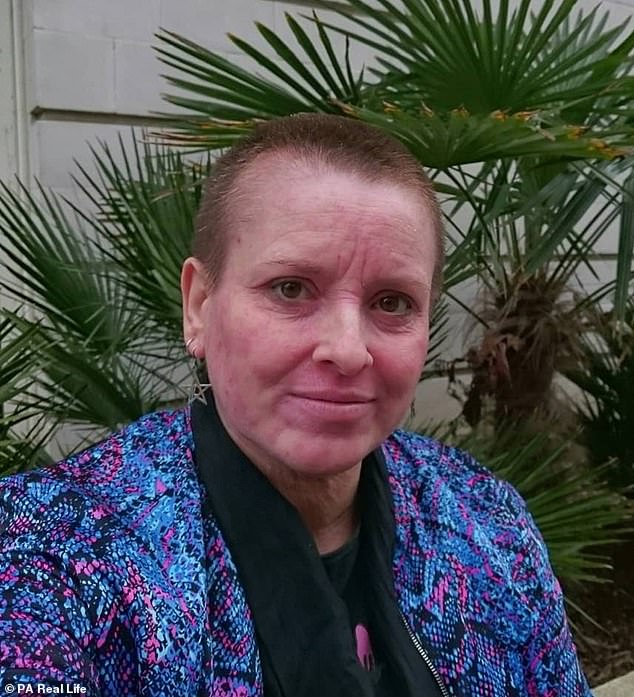 Unable to take the discomfort of her withdrawal symptoms any longer, Ms Marzaioli shaved her head to try and get some relief from the burning sensation on her scalp

Around six months after her severe flare-ups began, Ms Marzaioli turned to the internet for advice.

She came across The International Topical Steroid Addiction Network and was shocked to discover people all over the world had suffered adverse reactions to steroid creams.

‘I mentioned topical steroid addiction to doctors, but they didn’t think it was likely, even though my experience was mirroring hundreds of other peoples’,’ Ms Marzaioli said.

‘It is not widely accepted in the medical community so the difficulty is you have to self-diagnose.

‘Incidentally, I also found out around the same time the cream I’d been given in Italy was not hydrocortisone as I thought, but rather Diprosone – a much higher potency steroid cream.

‘So, I had been unknowingly using a large dosage of steroid cream for months.’ 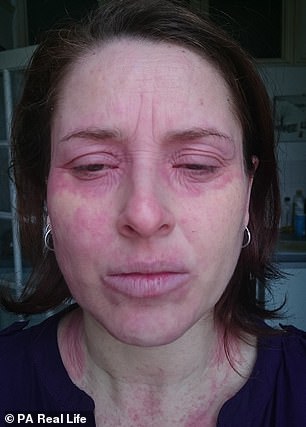 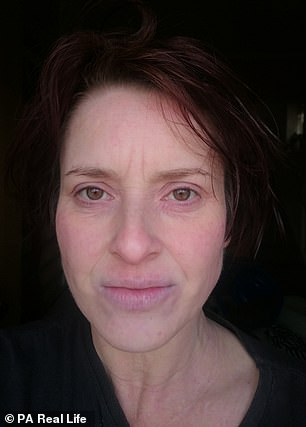 Pictured left in February 2016, Ms Marzaioli claims steroids left her skin so sore she ‘couldn’t even be cuddled’. She is now on the road to recovery and is pictured right on a ‘good skin day’

Ms Marzaioli was offered immunosuppressants by doctors, however, she turned the drugs down due to concerns over their side effects. Instead, she decided to ditch steroids.

Although she continues to suffer agonising flare-ups, Ms Marzaioli is determined not to use the ointments ever again.

Preferring a natural approach, she has cut out wheat, dairy, sugar and alcohol, and tries to limit her stress levels.

Ms Marzaioli also believes swimming in the sea eases her symptoms, which she does most days off Hove’s coast.

She has also found relief in a £7.99 moisturiser Balmonds after being recommended it by a friend.

‘It’s now a key part of my toolkit,’ Ms Marzaioli said. ‘I use it most days and it really helps when my skin is really sore. It makes a massive difference.’ 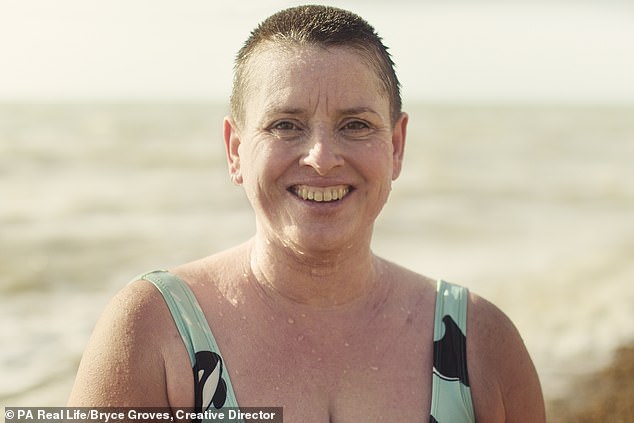 Ms Marzaioli, who lives on the south coast, swims most days to help ease her symptoms 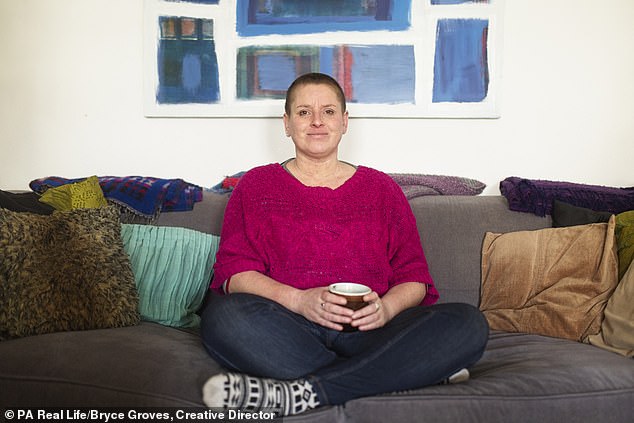 Although she does her best to stay positive, the ordeal has affected Ms Marzaioli. She claims she was ‘unprepared for the mental toll’ the experience would have on every aspect of her life

Although she does her best to stay positive, the ordeal has taken its toll on Ms Marzaioli.

‘I was unprepared for the mental toll the sheer exhaustion would have on me,’ she said. ‘It impacted on my life in ways I never considered.

‘It’s hard to reconcile when your life changes overnight like that. I found social situations very overwhelming, and relying so much on other people made me depressed and anxious.

‘The toughest thing was never knowing if it was going to improve, and surrendering myself to just taking it one day at a time.’

However, in a roundabout way, the experience has improved Ms Marzaioli’s confidence.

‘It has helped me to accept my body,’ she said. ‘I’ve realised how much of our self-worth is wrapped up in looks, but I have now made peace with myself and understand what I have to offer the world outside of my appearance.

‘We live in a world where, unless people can see an illness, they don’t understand the impact. But I know now that my worth runs deeper than what I look like.

‘I wouldn’t wish this on anybody, and it has been a tough road, but I have certainly learnt some lessons along the way.’

WHAT IS TOPICAL STEROID ADDICTION?

Topical steroid addiction arises from the use of such creams to treat conditions like eczema.

First described in 1979 in the International Journal of Dermatology, the theory is, over time, the skin becomes ‘addicted’ to the steroids. But it is not widely accepted among the medical community.

Many have called the ‘condition’ a fad, however, it has been recognised by the National Eczema Association since 2013.

Also known as red skin syndrome, the disorder does not have many statistics to show how common it is. One 2003 study from Japan, found that 12 per cent of adults who were taking steroids to treat dermatitis developed RSS.

It occurs when steroids have been abruptly discontinued after a prolonged or inappropriate length of administration. Women who blush easily are thought to be most at risk.

Topical steroid addiction has not been reported with correct drug use.

Excessive sweating and itching is a sign of recovery.  Many sufferers also develop insomnia.

Doctors should advise patients to avoid long term or high dose steroid use. Long term is considered to be one-to-two years of regular use.

Patients are also advised to cut down on steroids slowly but using a lower dose and gradually cutting back to, for example, every other day or a few times a week.