Home » Health News » When Will the Novel Coronavirus Pandemic Be Over?

We all have different worries—maybe we’re concerned about whether our housemate’s new cough is just allergies, or we’re wondering if we calculated how to stretch what’s left of our cut salaries right, and so many more. But there’s one question unifying the world in the COVID-19 era: When will it all end?

Some moments, it feels like the answer is “soon…maybe?” As of Wednesday, all U.S. states have started to re-open to some extent. Coronavirus vaccine trials are beginning to look promising. We all know someone who has decided it’s safe for them to do something we’ve been avoiding, like travel to shelter at home in a new locale or to visit family.

And yet we’re still seeing thousands and thousands of new cases every day, hundreds and hundreds of new deaths. Most of us still feel anxiety on a daily basis—less so than in March, but more so than we’d like.

So when will this disrupted life with the novel coronavirus end? The reality is, we may live with some kind of threat from SARS-CoV-2 forever. (Our current benign seasonal flu is actually a variant of the Spanish flu which raged as long ago as 1918, killing 50 to 100 million people worldwide).

But the height of our pandemic has to end at some point. And while no one has an actual answer, most agree it depends on two things: when we will reach a medical solution that allows infections to end or diminish, and when our lives can go “back to normal.”

When will the infections end?

The next few months are a waiting game.

One step in the right direction is that certain infection-control measures are improving: Worldwide, everyone’s trying to iron out supply chain and manufacturing issues, so hopefully frontline workers will have more access to personal protective equipment (PPE) and life-saving ventilators. We need to streamline blood and swab test production so there can be more quality control and the public can keep faith in the effectiveness of testing, says virology and microbiology expert Rodney Rohde, Ph.D., a professor at Texas State University.

According to Rhode, who has spent more than two decades dealing with infectious disease outbreaks like West Nile Virus and SARS, the medical end of the pandemic depends on three things:

How long a vaccine could realistically take

According to the World Health Organization, there are more than 100 vaccine projects in development right now and eight in actual clinical trials. One of the most promising formulas is from Moderna, who just announced early but positive results from the first phase of their clinical trial. Realistically, we’re looking at summer or fall of 2021 for the protection to be ready, Rohde says.

As for then delivering the formula, he explains if the US can ramp up their preparations to mass produce and deliver while the vaccine is being developed, the formula could actually be rolled out to Americans along that same timeline of Fall 2021. 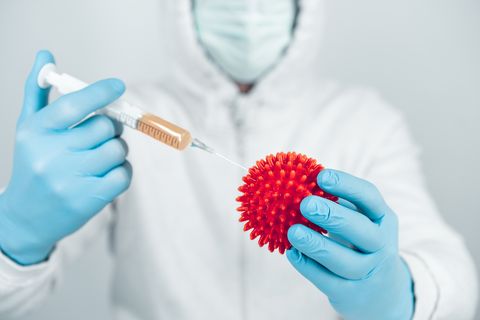 Rohde predicts that could take a full two years. That idea is supported by a recent study in Science, where Harvard researchers reported that with countries going in and out of social distancing and lockdowns over the coming months, we’re looking at 2022 to build up enough of a population immunity.

That means Spring 2022 is most likely the earliest we’ll have both a widely-available and effective vaccine for the virus and a dominant worldwide immunity to further stunt the spread.

Now, there are a few potential kinks: A second wave of outbreaks in the fall of 2020 could slow progress, since going back into quarantine means a potential disruption in production and manufacturing, Rohde points out. And the timeline of herd immunity is based on the assumption that our resistance to the virus will last longer than a year—which we don’t really know yet.

But the main wild card: “There is always a risk that a virus will mutate and render a vaccine less effective, especially for RNA viruses like influenza and coronaviruses,” he says. If it undergoes minor mutations, the vaccines currently in development would still be potentially useful. But if SARS-CoV-2 saw major mutations, we’re more or less back to the drawing board.

Can the weather slow down infections, even before a vaccine is ready?

There’s been a lot of talk about cases mellowing for the summer and then numbers re-surging in the fall. But Rohde says it’s unclear if we’ll see any seasonality with this virus. “Many of our common colds—which are also coronaviruses—show up year round,” he points out.

And looking at pandemics past, there isn’t much of a pattern—either in seasonal trends or a timeline. The 1918 influenza (aka the Spanish flu) saw three major outbreaks—the spring of 1918, fall of 1918, and spring of 1919—with rates of infection dropping during both summers. But the H1N1 flu, which the WHO declared a pandemic in June of 2009, peaked during the summer months.

When will we be able to get back to “normal”?

Here’s the bad news: Life will probably never be “normal” again. Much like our country was never the same after 9/11, it won’t be the same after COVID-19.

Except the shift will be world-wide. 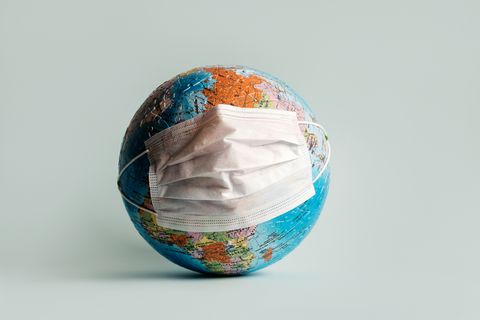 You might have to take a blood test before you’re allowed to board a flight, have your temperature checked before you enter your office, eat with a plastic divider between you and your date.

Waiting for your pre-corona life to return sets you up for disappointment. You’re much better off adapting to the new reality than fighting it.

The good news: We’re moving toward having the emotional bandwidth to do just that. The initial spike in fear is starting to peter out, says health psychologist Dana Rose Garfin, Ph.D., an assistant adjunct professor in the school of nursing at the University of California, Irvine who’s currently researching the social impacts of the pandemic.

Our brains perceive new threats as the scariest, so that fear wanes over time as people live in it.

And you’ll probably start to feel that life is less limited soon. By Wednesday, all US states will have started re-opening to some extent. Restaurants, gyms, and barber shops are open for business in some places at limited capacity. Other businesses are finding inventive solutions—like hosting drive-in movies on the side of bars—to solve both their economic woes and our social woes.

But we’re really just starting to understand how tall the psychological tidal wave of the pandemic really is. “If there’s one thing that has made this really distressing for people, it’s the fact that it’s novel. We don’t know what’s going to happen. And things are constantly changing,” Garfin says. Even with states reopening, most of us don’t feel like we have any better grip on what’s really going on.

The psychological end to the pandemic

The two factors in what it will take to feel there’s going to be a mental end to the pandemic: when we’ll start to hear informative, streamlined messaging from officials all around, and how bad the recession is really going to be.

“Officials have been and continue to give varying information. People don’t know what to believe and it’s very confusing for them.” Garfin explains. That muddiness over whether it is in fact safe to go to the newly reopened gym or head out camping for the weekend, whether we can actually see our friends if we stay 6 feet away—“there is mental exhaustion in being cautious,” Garfin says. And until the American people hear a super clear and streamlined message of what is safe, we’re going to see a continued increase in anxiety, she adds.

On the one hand, the lack of clarity is understandable. No one knows what’s safe and lifting restrictions is really a trial-and-error in risk assessment. So hopefully we’ll better understand what is truly allowed, socially, over the next few months. That will help ease some of the psychological burden.

But unarguably, everyone will feel the stress of a down economy. “Even if you didn’t lose your job, you probably took a pay cut. And regardless of what you’re making now, that is likely stressful for your situation. Across the socioeconomic line, we’re going to see the ripple effect of that in terms of mental health,” Garfin says.

How long that stressor will last is up in the potentially-infected air—we’ll be careening toward (or in) a recession at least until we have a vaccine, according to Federal Reserve Chairman Jerome Powell on 60 Minutes this week. But more than likely, it’ll be much longer since the World Economic Forum stated recently that we can expect a world-wide prolonged global recession thanks to the coronavirus.

People will not only have more financial stress over paying their mortgage and bills, but also less money to go out with—whatever “going out” even looks like in the future. Together, these will likely increase anxiety, depression, domestic abuse, loneliness, and isolation, Garfin points out.

So is there any good news?

It will get easier, though.

A second wave won’t be quite as stressful since people will know more about what’s ahead and how to deal with it. We’ve all had to figure out homeschooling kids, being productive working from home, filing for unemployment or small business loans, staying connected to family virtually, how to live without the gym or parties or weekly poker night.

And as those around us start to feel safer and less anxious, so will we. “We’re very influenced by what our neighbors, friends, and family are doing,” says Garfin. “The more people around you are doing something, the more you’re going to do it.”

Perhaps the silver lining of this whole experience is there are certain habits we’ve had to pick up during the pandemic that we all should’ve been doing anyway—like being vigilant about washing hands and not sharing germs. Even after temperature checks subside, a lot of “COVID habits” will likely stick and become normalized: wearing masks in public when you’re sick; companies being flexible about working from home; perhaps even opting into spending more time doing things at home, like cooking and home workouts—now that we all know how to them.

But the most important point we should be taking away from the pandemic while we wait for the end and after: We need to actively take better care of our health, both physical and mental.