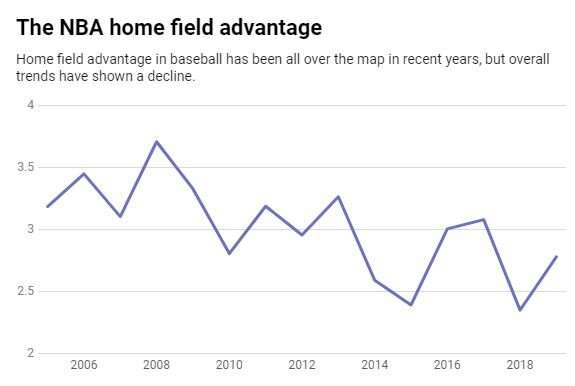 Never before has the away team won every single game in the World Series, but that’s exactly what happened this year.

When the Washington Nationals won Game 7 in Houston to clinch the series against the Houston Astros, it marked the seventh straight road team win, which begs the question: What ever happened to home field advantage?

I’m a professor of computing and information, and my own research—as well as other research—clearly supports the presence of an edge that comes from playing at home.

But what causes the home field advantage? The answer remains unclear, but several hypotheses have been proposed. While my focus is on the NBA, these arguments can apply to other sports, including baseball. Having said that, baseball is the sport where the home field advantage is the least pronounced among the four most popular sports in the U.S.

The crowd has nothing to do with it

Many sports fans believe that crowd noise has a direct impact on player performance.

While no one can ever be sure what’s going on in a player’s head when the opposing team’s fans get loud, the data show that players aren’t particularly fazed by boos during an away game.

I analyzed both home and away free-throw shooting of all the players for the NBA’s 2018-19 season. Free throws provide a controlled setting that isolates the home crowd as the only externality potentially affecting the shot.

The results indicated there is no evidence that players perform differently on free throws whether they’re at home or playing away.

In a similar argument for the NFL, the common perception is that a loud crowd will make it more difficult for visiting players to hear the play that’s called, and this will lead to confusion and delayed reactions from players.

But if crowd noise really did have this effect, you’d expect more false start penalties to be called on the visiting team. This does not happen.

While the crowd appears to have no or very little effect on players’ performance, that might not be the case for the referees.

Several compelling data points support the hypothesis that a large portion of the home edge is due to officiating bias in favor of the home team in the form of subjective calls.

For example, in basketball, the number of fouls charged to a team—and consequently the number of free throws awarded—are subject to referee bias. I analyzed the data from the 2018-19 NBA season and found that the home team is awarded on average approximately 0.8 more free throws, or 0.6 points per game.

Given that the home court advantage in the NBA was approximately 2.7 points last year, these extra shots from the charity line account for approximately 22% of the home edge. Other subjective violations, such as traveling, also break in favor of the home team, with visiting teams being whistled for about half a violation more each game. This is essentially one-half less possession, which is worth approximately another 0.6 points, explaining another sizable part of the home edge.

The same holds true for other sports. In soccer, referees add more stoppage time when the home team trails by a goal compared with when the home team is ahead by a goal. Interestingly, referee bias in soccer is reduced when there is a track field separating the pitch and the fans.

In baseball, during a full count, more pitches are called strikes for the home team’s pitcher.

In the NHL, referees call 20% fewer penalties for home teams, which is equivalent to about 0.25 goals.

Another plausible hypothesis for explaining home field advantage—one supported by several studies—involves travel. In particular, studies have shown that traveling , back-to-back scheduling of games and jet lag are associated with reduced performance.

Some teams also seem to benefit by playing in regions that have unique weather patterns or altitudes. For example, Denver’s basketball team has the most pronounced home field advantage in all of professional sports. This is probably due to the city’s high altitude—5,280 feet—which may cause visiting players to suffer from headaches, dizziness and other complications of altitude sickness.

Of course, these aren’t the only possible reasons for the presence of home field advantage.

The question remains open, but researchers do know that the home field edge has been slowly declining over the years.

Using a regression-based method, I calculated the home edge in terms of points in the NBA during the past 15 years. The declining trend potentially can be attributed to changes in officiating, more comfortable travel and advances in understanding the body’s circadian rhythm that can lead to more educated travel preparation.

Last week, the Portland Trail Blazers won in Dallas, beating the Mavericks due to a new rule allowing coaches to challenge referee decisions. Portland challenged—and managed to overturn—a foul called five seconds before the end of the game that most probably would have given the win to the home team.