Home » 'Weathering': The health effects of stress and discrimination

Repeated exposure to socioeconomic adversity, political marginalization, racism, and perpetual discrimination can harm health. In this Special Feature, we explore this harmful effect, which is known as weathering. 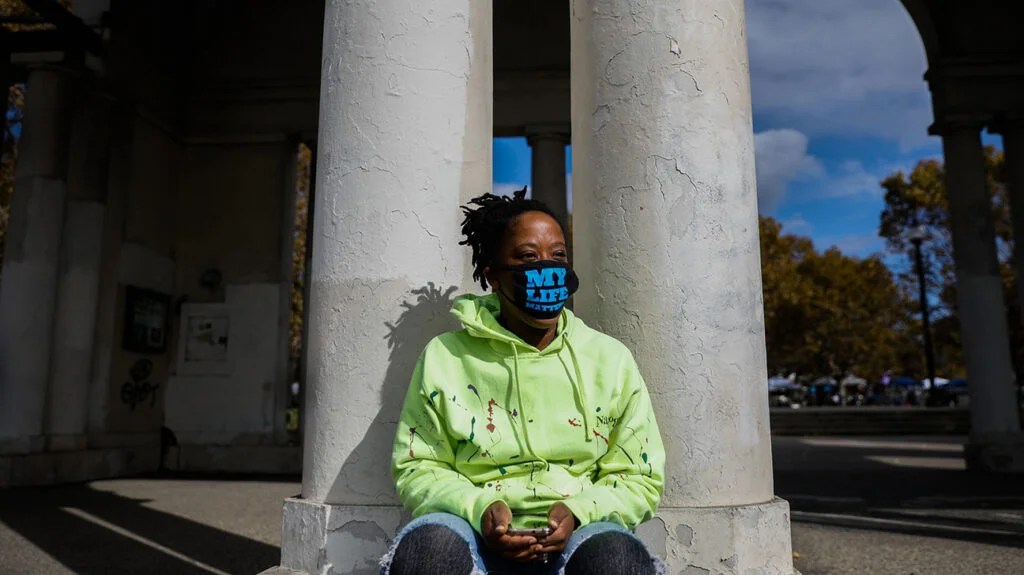 If there is one thing that the murder of George Floyd and the ensuing Black Lives Matter protests last year have made abundantly clear, it is this: Racism kills.

But racism and racial discrimination do not just jeopardize people’s lives directly, through violent acts and hate crimes perpetrated by those who hold racist beliefs.

Discrimination and marginalization can also slowly chip away at one’s health, causing those who are at the receiving end of discriminatory attitudes to age or even die prematurely.

In health, this effect of premature biological aging and associated health risks as a result of being repeatedly exposed to social adversity and marginalization bears the name of weathering.

In this feature, we explore the meaning and ramifications of this term by looking at the studies that solidified and broadened its acceptance in the scientific community.

Health inequities affect all of us differently. Visit our dedicated hub for an in-depth look at social disparities in health and what we can do to correct them.

How the weathering concept came about

The term “weathering” was coined in 1992 by Dr. Arline Geronimus, at the time a researcher in the Department of Public Health Policy and Administration at the University of Michigan in Ann Arbor.

Currently, Dr. Geronimus is a professor in the Health Behavior and Health Education department of the same university.

While studying trends in women’s fertility, Dr. Geronimus had observed that African American women do not have the same “prime” childbearing years as their white counterparts.

Namely, an average white woman is considered to have the most fertility and the lowest risk of unhealthy pregnancy and neonatal mortality when she is between 20 and early 30 years old, notes Dr. Geronimus in her paper.

However, for African American women, this peak of fertility and point of lowest risk was in their teens. In other words, Black women in the United States were more likely to have a healthy pregnancy in their late teens than in their mid-twenties.

Dr. Geronimus then first advanced the “weathering hypothesis” as a potential explanation for these maternal and infant health disparities.

In her groundbreaking paper, she defines the weathering hypothesis as the idea “that the health of African American women may begin to deteriorate in early adulthood as a physical consequence of cumulative socioeconomic disadvantage.”

An apt and troubling metaphor

As Dr. Geronimus said in an interview for NPR, the notion of weathering was not exactly received with much enthusiasm at the time. It did, however, pick up significant traction over the following decades.

For example, Google Scholar reveals over 1,000 citations of the 1992 paper, as well as a rising trend in how often Dr. Geronimus’s work in general has been cited over time, with the sharpest rise in 2020.

In her later work, Dr. Geronimus and other scientists who embraced the weathering hypothesis extended it to apply to Black adults in general, not just Black women.

For instance, a 2006 paper by Dr. Geronimus and colleagues set out to test the hypothesis that Black adults “experience early health deterioration as a consequence of the cumulative impact of repeated experience with social or economic adversity and political marginalization.”

In the NPR interview, Dr. Geronimus explained the notion of weathering using a metaphor that is in equal measure disheartening, troubling, and alarmingly true.

Referring to the activist Erica Garner, who died of complications from a heart attack at the age of 27, Dr. Geronimus said that the feelings of stress leading to such an early death are like playing a game of Jenga.

Paraphrasing the activist’s sister, she said: “They pull out one piece at a time, at a time, and another piece and another piece, until you sort of collapse. […] I thought that Jenga metaphor was very apt because you start losing pieces of your health and well-being, but you still try to go on as long as you can.”

The human damage and hurt caused by this phenomenon is incommensurable. However, a social scientist’s job is to try to measure the immeasurable. So how did Dr. Geronimus and her colleagues scientifically test and quantify the weathering hypothesis? And what have the data shown so far?

As the researchers explain in their 2006 paper, in the absence of a direct measure of weathering, scientists have turned to other health indicators, such as pregnancy outcome, excess mortality, and disability.

Scientists that Dr. Geronimus and her colleagues quote in the paper indeed discovered “age patterns by race that are consistent with weathering.”

Some researchers have further expanded their efforts in an attempt to explain these social disparities in health. To do so, they tried to link biomarkers to social measures in order to understand the physiological mechanisms that may explain these disparities.

The researchers then linked these biomarkers to social measures, including socioeconomic status, occupation, birth outcome, and environmental risk.

Such social measures gave rise to a key concept for understanding and testing the weathering hypothesis: allostatic load.

First conceptualized by Dr. Bruce McEwen and Dr. Eliot Stellar in 1993, the term “allostatic load” refers to the physiological “cost” of chronic, or repeated, exposure to stress.

The wear and tear of the body’s adaptive mechanisms cumulates over a long period of time. In other words, it has very real and quantifiable physiological effects.

Firstly, in response to stress, the human body releases substances that, when in excessive amounts, can harm health. These substances include hormones and neurotransmitters, such as norepinephrine, epinephrine, and cortisol.

The higher this score, the stronger the associations with social measures, such as “older age, increased mortality, lower socioeconomic status, cognitive decline, and unsupportive childhood and adult relationships.”

So what do these allostatic load scores tell us when applied to Black populations, compared with white ones?

In their 2006 paper, Dr. Geronimus and team used data from the National Health and Nutrition Examination Survey to calculate allostatic load scores for over 6,500 participants aged 18–64.

Of the total number of participants, 1,340 were Black, and the rest were white. Using logistic regression models, the researchers estimated the probability of a high allostatic load score by “age, race, gender, and poverty status.” They also estimated the odds of Black adults of having a high allostatic load score relative to the odds of white adults.

The scientists found that Black adults “had higher scores than [white adults] and had a greater probability of a high score at all ages, particularly at 35–64 years.”

Specifically, the researchers note, by age 45, “50% of Black women had a high score; by age 64 years, more than 80% did. In contrast, [white adults] reached the 50% level only as they approached age 60 years, and they never reached levels much above 60%.”

Furthermore, the study found that, for people aged 18–24, a Black person was 1.49 times more likely to have a high score than a white person. By ages 55–64, this Black-white gap in estimated relative odds rose to 2.31.

Poverty does not explain weathering gaps

Crucially, these “[r]acial differences were not explained by poverty. Poor and nonpoor Black women had the highest and second highest probability of high allostatic load scores, respectively, and the highest excess scores compared with their male or [w]hite counterparts.”

For instance, more specifically, the analysis found that “[n]onpoor Black women aged between 55 and 64 years had five times the odds of high [allostatic load] scores compared with their [w]hite counterparts.”

Importantly, Black women in general “bear a large burden of allostatic load compared with either Black men or [w]hite women,” note the researchers.

The fact that these discrepancies were not explained by racial disparities in poverty suggested to the researchers that living in a “race-conscious society” and the efforts required to cope is what causes weathering.

As the paper concludes, “The weathering effects of living in a race-conscious society may be greatest among those [Black adults] most likely to engage in high-effort coping.”

“Lived experience [of] racism” and discrimination are some of the phenomena that require such high-effort coping. Commenting on her life’s work, Dr. Geronimus said:

“[W]hat I’ve seen over the years of my research and lifetime is that the stressors that impact people of color are chronic and repeated through their whole life course and in fact may even be at their height in the young adult-through-middle-adult ages rather than in early life. And that increases a general health vulnerability — which is what weathering is.”

Other renowned researchers have also backed up and built on the evidence first brought forward by Dr. Geronimus’s work.

Dr. David R. Williams, for instance, who has extensively written and spoken on the adverse health effects of racism, has repeatedly pointed out that Black adults living in the U.S. are “experiencing greater physiological wear and tear and are aging, biologically, more rapidly than [their white counterparts].”

This premature aging, Dr. Williams notes, “is driven by the cumulative impact of repeated exposures to psychological, social, physical, and chemical stressors in [Black people’s] residential, occupational, and other environments, and coping with these stressors.”

As newer technology has enabled scientists to look deeper into the potential molecular mechanisms for weathering, studies have shown, for example, that telomeres — the DNA sequences at the end of chromosomes — are shorter in Black women than they are in white women.

Shorter telomeres are widely considered by the scientific community to be a reliable indicator of a more advanced biological age.

These results were reached by studying 2,694 participants aged 48–60 from the reputed Coronary Artery Risk Development in Young Adults study, which was conducted across four U.S. cities from 1985 until 2016.

As Dr. Geronimus noted herself in the interview, the negative effects of weathering on the health of Black people and people of color are unlikely to go anywhere until we fix issues of structural racism and discrimination.

“[W]ithout dealing with the kind of more structurally rooted factors that lead to weathering across class, we’re not going to end weathering.”