A vlogger whose skull was slowly crushing her brain into her spine has revealed that her body is now ‘falling apart’.

Christina Doherty, of Woburn, Massachusetts, experienced headaches, confusion and paralysis from the age of 16 and had always been an ill child.

Doctors diagnosed the 23-year-old with a chiari malformation which is when brain tissue spreads into the spinal canal because in most cases, the skull is too small.

But Miss Doherty claims baffled doctors ‘didn’t know what to do’ with her, after surgery failed to improve her condition.

She was finally diagnosed with Ehlers-Danlos syndrome (EDS), a genetic condition that affects the body’s connective tissue keeping everything – bones, organs, and skin – together.

Miss Doherty, who has had more than ten surgeries in total, said: ‘My life has become a race against time to literally try to hold myself together before I fall apart.’ 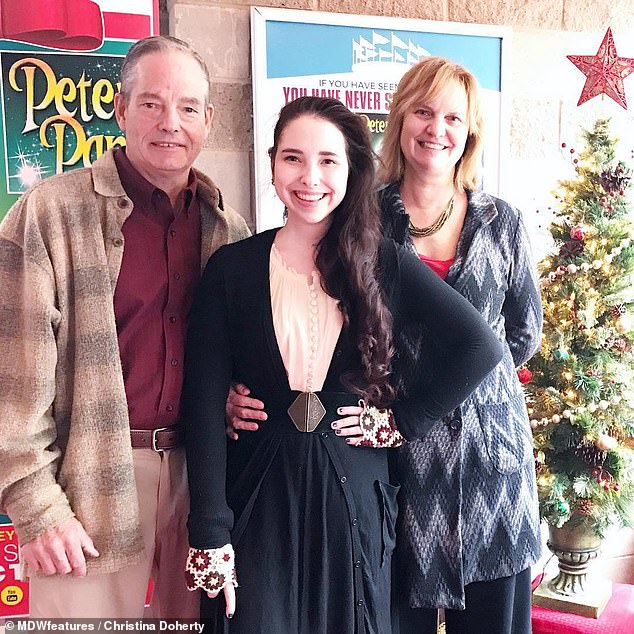 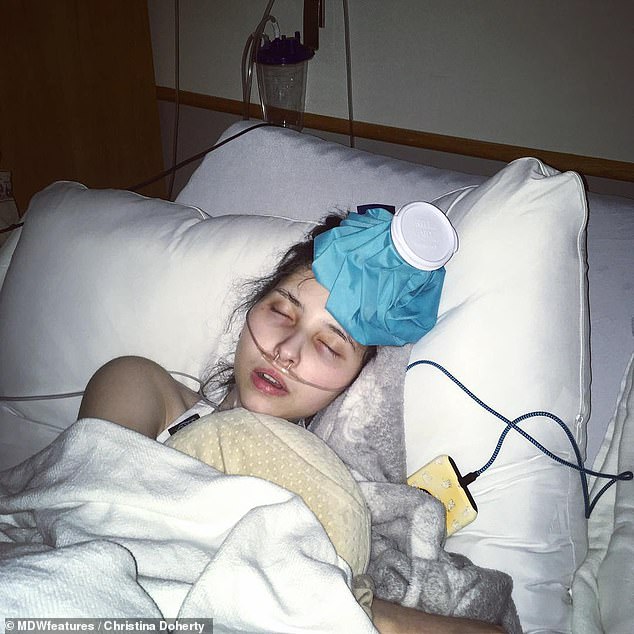 Despite having ten surgeries, Miss Doherty, pictured in hospital unwell, says she is in a race against time as her body is falling apart and her skull is ‘crushing her brain’ 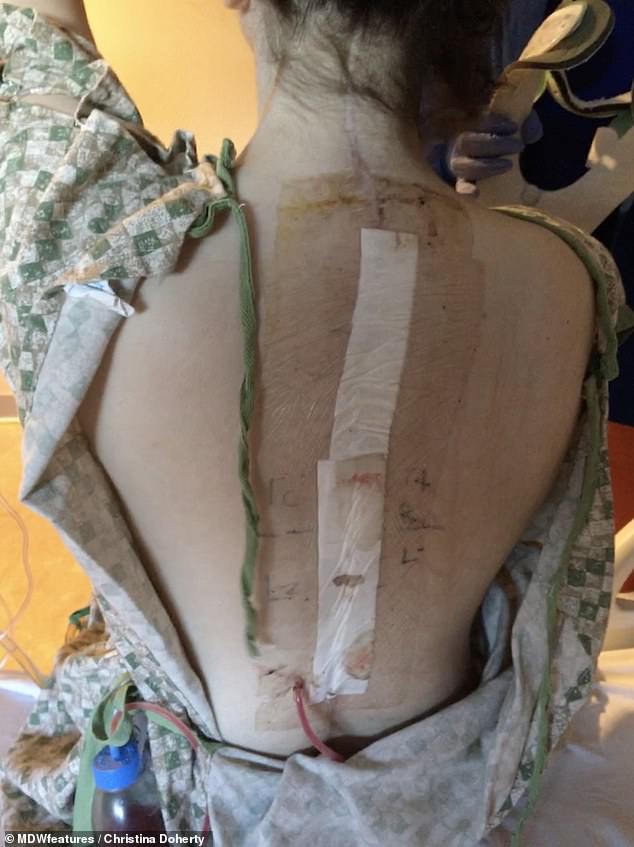 Miss Doherty said her surgery has included having her spine from the skull to the tailbone fused together to ‘stop me from falling apart’. Pictured, after having surgery

Miss Doherty, who is also an artist, believes her EDS was evident from the age of 10-years-old.

In 2006, on Christmas Eve, her whole family got the flu and although everyone else got better, Miss Doherty didn’t.

For the next couple of years, Miss Doherty’s family were convinced that she had an auto-immune disease.

WHAT IS EHLERS -DANLOS SYNDROME?

Ehlers-Danlos syndrome (EDS) is the name for a group of rare inherited conditions that affect connective tissue.

Research statistics of the Ehlers-Danlos syndromes show the total prevalence as 1 in 2,500 to 1 in 5,000 people, according to charities.

There are thirteen individual genetic conditions, all of which affect the body’s connective tissue.

Depending on the type of EDS, the faulty gene may have been inherited from one parent, or both parents.

Sometimes the faulty gene isn’t inherited, but occurs in the person for the first time.

EDS can affect people in different ways. For some the condition is relatively mild, while for others their symptoms can be disabling. Some of the rare severe types can be life-threatening.

There are several types of EDS that may share some symptoms.

These include an increased range of joint movement (joint hypermobility), stretchy skin and fragile skin that breaks or bruises easily.

Miss Doherty was always tired and contracting viruses but when she was 16, she was suddenly unable to read.

She said: ‘My symptoms started on the mild side with mostly just gastrointestinal issues, joint pain, fatigue and constantly getting viruses.

‘For many years, we thought for sure I had some sort of auto-immune disease causing all of this, but nothing was found.

‘Suddenly when I was just 16, I lost the ability to read. I could see the letters clearly, but they meant nothing to me.

‘Then the vertigo started. The world was spinning and shifting around me. Next came paralysis, seizures, ringing ears, fainting, headaches and confusion.’

Miss Doherty had a MRI scan where doctors discovered that brain tissues were extending into her spinal canal – a chiari malformation.

But unfortunately things got worse – her symptoms came back but she was also experiencing mini strokes.

She said: ‘I had emergency surgery and remember feeling overwhelmed because I thought I was finally going to get my life back. I was wrong.

‘Things got worse. My surgeon struck me off because he didn’t know what to do. My symptoms were all back, bringing “friends” with them along with mini strokes.’ 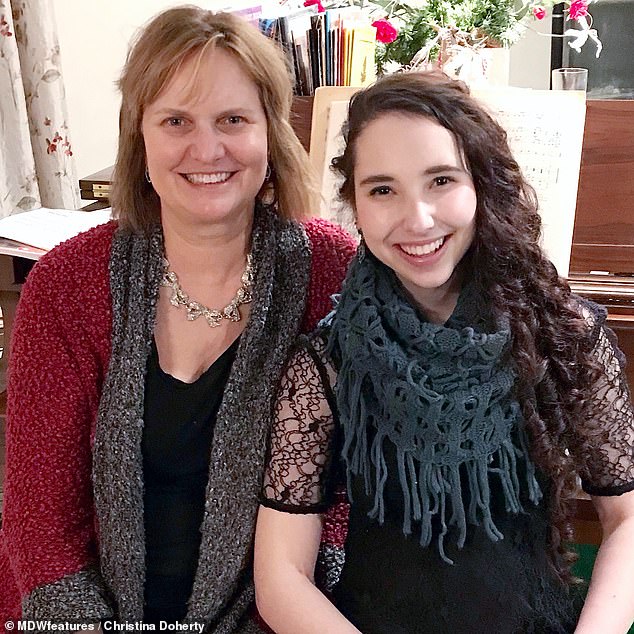 The vlogger, who is also an artist, believes her condition was evident from the age of 10-years-old when she never recovered from flu. Pictured, with her mother 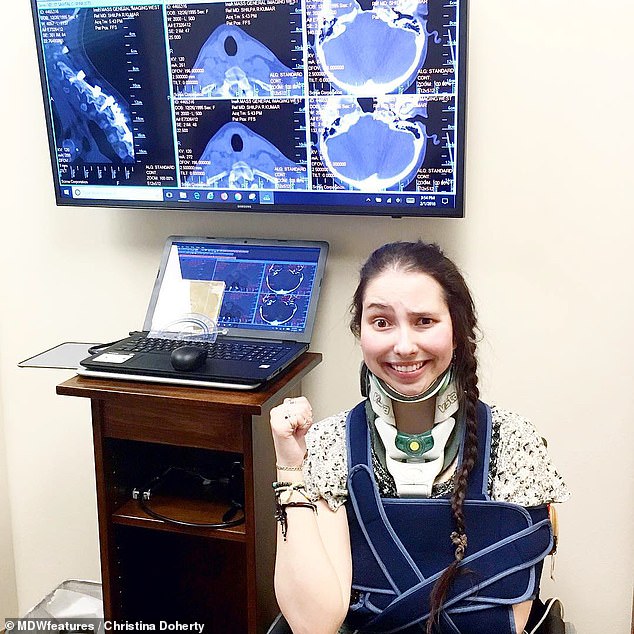 Miss Doherty had a MRI scan where doctors discovered that brain tissues were extending into her spinal canal, which is a chiari malformation. Pictured in front of some brain scans 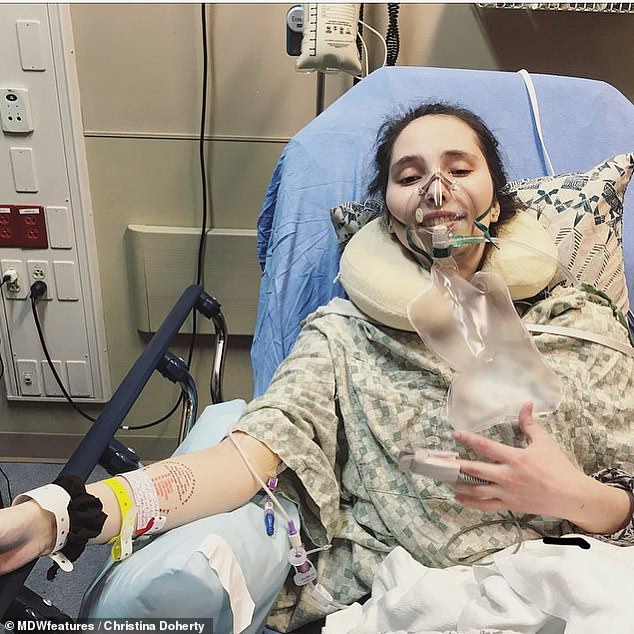 Miss Doherty said: ‘Suddenly when I was just 16, I lost the ability to read. Then the vertigo started. Next came paralysis, seizures, ringing ears, fainting, headaches and confusion.’ Pictured in hospital

In 2013 Miss Doherty was watching a documentary on EDS. After identifying with the symptoms described by others, she started Googling EDS.

Within a month, she had the diagnosis she so badly needed and began seeing neurological specialists.

They told her that because of her EDS, the remainder of her skull was unable to stay in place.

She said: ‘I started seeing a neurosurgical specialist in EDS. They found because much of my skull had been removed it was crushing my brain and nearly slipping off altogether.’

Miss Doherty has since had more than 10 surgeries to fix this including having her spine fused in place, from her skull to her tailbone, to try and keep her bones in place.

She said: ‘I can’t count the surgeries on two hands, but they included having my spine from my skull to my tailbone fused together to stop me from falling apart. 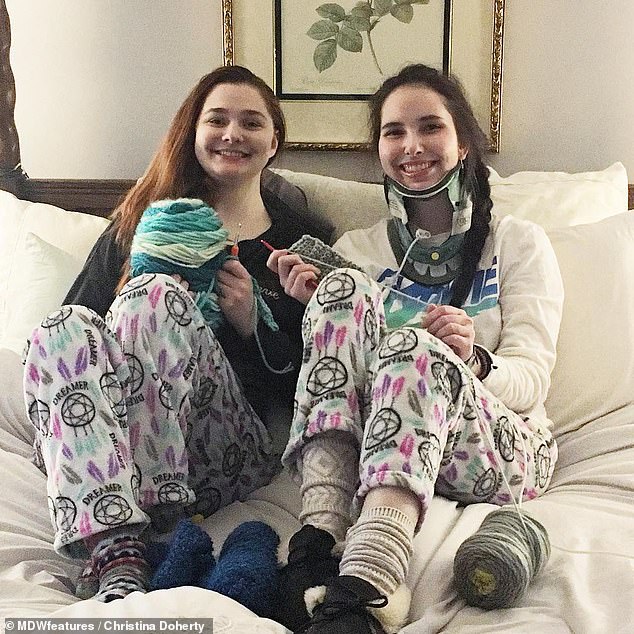 Miss Doherty, pictured knitting with a friend at home, said: ‘My life has become a race against time to literally try to hold myself together before I fall apart’ 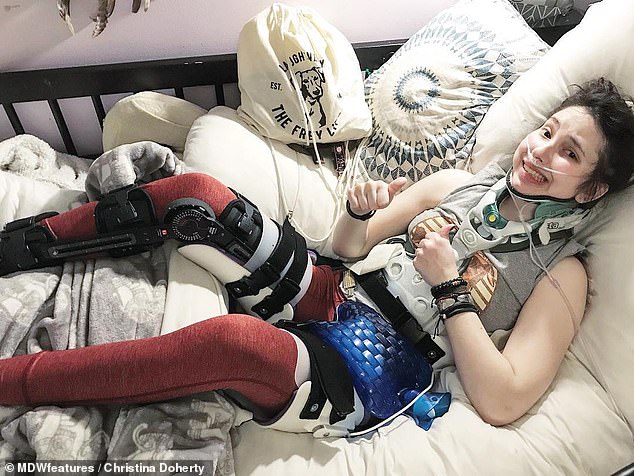 Miss Doherty has had an operation to have the bones fused together in her lower leg as her foot was at risk of ‘slipping away’. Pictured, wearing a spine and leg brace at home 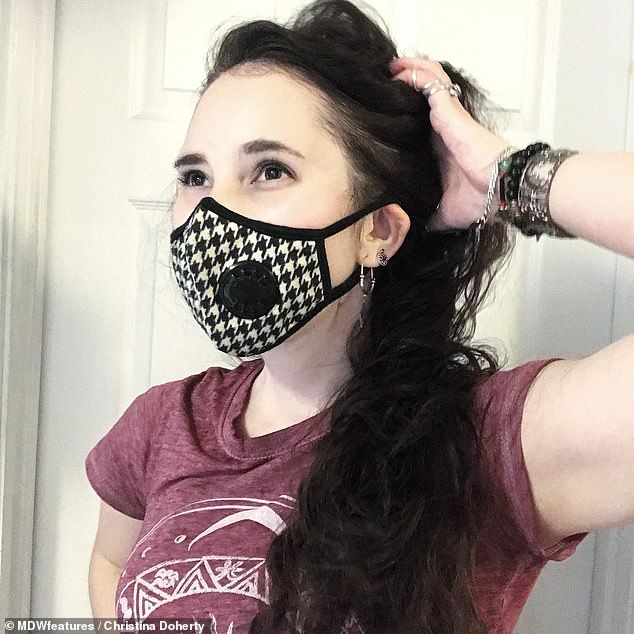 Miss Doherty takes 30-40 tablets a day and has daily rehab exercises and nebuliser treatments to help her breathe. Pictured, wearing a mask because she is sensitive to smells

‘I also had a similar operation to have the bones fused together in my lower leg as I was at risk of my foot slipping away.

‘Until a few months before the end of 2018 I was also super sensitive to foods, smells and even some types of water. I still wear a mask in public today.’

Being sensitive to smell is common among EDS patients as being exposed to strong smells such as perfumes or food can lead to headaches and nausea.

Miss Doherty has 30-40 tablets a day which have to be crushed and injected into her stomach because her condition makes it difficult to swallow.

She said: ‘Besides my daily regime of endless medications, rehabilitation exercises and a nebuliser to help me breathe.’

The prognosis for people with EDS varies by subtype, with the most severe type, vascular EDS, having an average life expectancy of 48 years.

Despite everything, Miss Doherty tries to remain positive and one day would like to travel Canada and the UK if she can.

She said: ‘I just love everything about life. The silver lining when being ill are the simple things. Everything is just so beautiful to me. I can’t wait to travel to Canada and the UK in future.

‘It really does get better. It might be over said, but it’s true. EDS doesn’t always have to be downhill.

‘It is not a death sentence. I can’t stress how important it is to make connections and make use of the many support groups out there.’

The prevalence of all types of EDS appears to be at least one in 5,000 individuals worldwide, according to the National Institute of Health.

It is difficult to determine the true figure, as those with mild joint and skin problems may be undiagnosed. 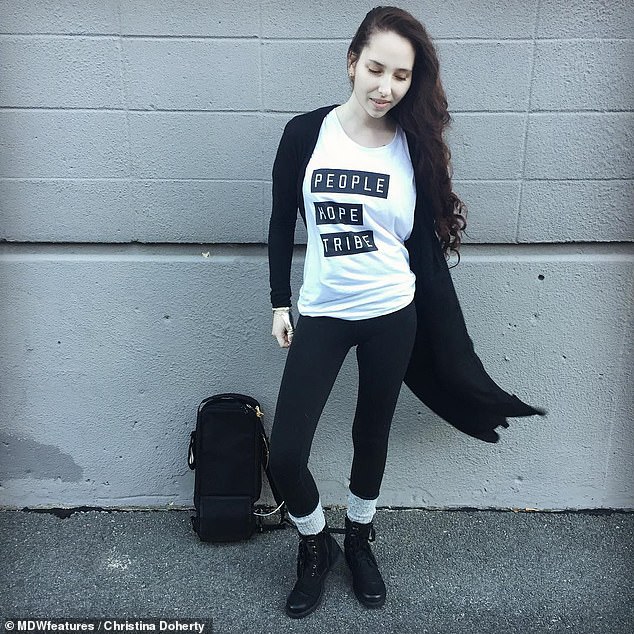 Despite everything, Miss Doherty tries to remain positive and one day would like to travel Canada and the UK if she can. Pictured recently

WHAT IS CHIARI MALFORMATION?

Chiari malformation occurs when the brain tissue extends into the spinal canal. This can happen if the skull is abnormally small or misshapen, which presses the brain downwards.

The Brain & Spine Foundation in the UK and the National Institute of Neurological Disorders and Stroke in the US both estimate one in every 1,000 people are born with the condition.

It may actually be more common due to not all sufferers developing symptoms.

There are three types of chiari malformation:

Type I – occurs as the skull and brain are growing. Symptoms usually appear in late childhood or early adulthood and include neck pain, poor balance, co-ordination difficulties, numbness, dizziness and impaired vision

Type II – is present at birth and related to spina bifida. Occurs when more of the brain tissue extends into the spinal cord than in Type I. Symptoms may include changes in breathing patterns, swallowing problems, arm weakness and quick downward eye movements

Type III – is present at birth and the rarest form of chiari malformation. Occurs when a portion of the lower part of the brain extends through an abnormal opening in the back of the skull. Has a high mortality rate and can cause brain damage

Although not usually considered life-threatening, chiari malformation may be fatal if a patient’s breathing or swallowing is affected.

It can also lead to hydrocephalus – the build-up of cerebral spinal fluid in the brain – which can be deadly if untreated.

Treatment may not be necessary if symptoms are mild with just regular check-ups and MRI scans being required.

However, surgery can be carried out to remove a small section of bone at the back of the skull. This relieves pressure by giving the brain more room.

The procedure runs the risk of infections, fluid in the brain and spinal cord leaking. Although the operation helps to relieve symptoms it cannot cure nerve damage that has already occurred.