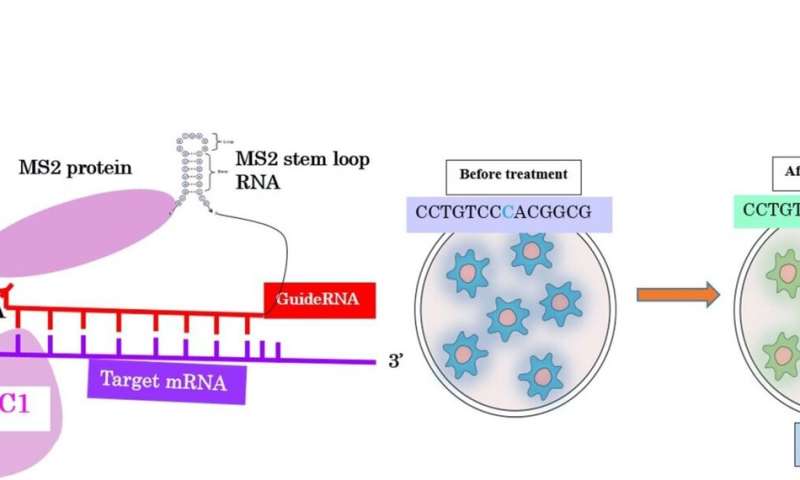 Various genetic diseases caused by point mutations have no established therapeutic approaches. Prof. Tsukahara and colleagues (Japan Advanced Institute of Science and Technology) are studying a therapeutic method using artificial RNA editing. It was announced that this year’s Nobel Prize in Chemistry will be given to the two scientists who discovered CRISPR/Cas9 for genome editing.

Although genome editing is drawing attention as a gene repair technology, genome editing such as CRISPR/Cas9 may result in permanent alterations in genomic DNAs, potentially affecting multiple loci. Currently, it is very difficult to perform accurate genome editing in all targeted cells in vivo. So, it is possible to edit the genome in a fertilized egg, embryo, or cells, however, it is not suitable for gene therapy in humans. Moreover, genome editing raises ethical concerns.

Therefore, the researchers believe that genome editing is a suitable method for “ex vivo” techniques, or for use in fertilized eggs, but not throughout a patient’s body. In contrary, changes resulting from the RNA editing are not permanent because they do not affect the genome sequence, and can be done in sequence-specific manner. Therefore, for the purpose of therapeutic treatments, RNA editing is preferable to genome editing, says Prof. Tsukahara. Artificial site-directed RNA editing is an important technique for modifying genes and ultimately regulating protein function. The researchers are trying to modify the genetic code of transcripts (RNA) by artificial RNA editing for the treatment of genetic disorders.

RNA editing is a physiological process and widespread in living organisms to produce various proteins with different functions from a single gene. In mammals, C or A of the RNA chain is base sequence-specifically hydrolytically deaminating, whereby C is replaced by U and A by I (inosine). These base conversions occur as a result of deamination of A or C, which has been found to be catalyzed by ADAR and APOBEC family enzymes, and then change genetic codes in RNAs. In this paper, the researchers report successfully conducting artificial C-to-U conversion of mutated RNA using APOBEC1 for the first time.

Many genetic diseases are caused by T-to-C point mutations. Hence, editing of mutated genes represents a promising strategy for treating these disorders. The researchers engineered an artificial RNA editase by combining the deaminase domain of APOBEC1 (apolipoprotein B mRNA editing catalytic polypeptide 1) with a guideRNA (gRNA) that is complementary to the target messenger RNA (mRNA).

In this artificial enzyme system, the gRNA is bound to a MS2 stem-loop, a deaminase domain is fused to the MS2 coat protein and has the ability to convert mutated target nucleotides from C-to-U. As a target RNA, they used RNA encoding blue fluorescent protein (BFP) that was derived from the gene encoding GFP by a 199T > C mutation. Upon transient expression of both components (deaminase and gRNA), they observed GFP by confocal microscopy, indicating that mutated 199C in BFP had been converted to U, restoring the original sequence of GFP.