Only 18% of primary care physicians (PCPs) and 12% of all doctors exchanged data electronically with public health agencies in 2019, according to a new report from the Office of the National Coordinator for Health IT (ONC). 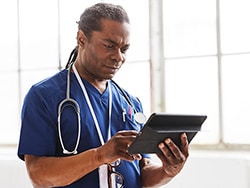 However, the percentage of PCPs who exchanged data electronically with public health agencies was five percentage points higher in 2019 than in 2018, the report noted. Moreover, it is likely that the frequency of electronic reporting to these agencies has increased since 2019 because of COVID-19.

The survey data in the report doesn’t show how many practices exchanged data with state and local public health agencies (PHAs) through manual processes such as paper-based data sharing, phone calls, emails, and faxes, an ONC blog post noted. Recent studies show that these are the primary conduits for sending and receiving data between healthcare providers and PHAs, the post said.

Nationwide, however, the report found little difference in the percentages of independent and employed physicians who were online with PHAs.

Only 12% of general practitioners and family physicians shared data electronically with PHAs in 2019, the reported noted. In contrast, 24% of general internists and 26% of pediatricians exchanged data online with PHAs.

Similarly, 44% of PCPs electronically searched for vaccination or immunization history information from sources outside their practice or system. But only 41% of general practitioners and family physicians did so, compared with 53% of internists and 51% of pediatricians.

Much of this difference can be explained by the fact that more general practitioners and family physicians than internists or pediatricians practice in rural and other underserved areas, according to Steven E. Waldren, MD, vice president and chief medical information officer of the American Academy of Family Physicians.

PCPs who reported the ability to electronically search or query for patient health information from outside sources were three times more likely to exchange information electronically with PHAs than those who didn’t have this search capability. PCPs who reported the ability to integrate patient health information into their EHRs were twice as likely to search for immunization data as those who didn’t have this capability, and 81% of the physicians who could integrate outside information searched for this data.

The percentage of PCPs who looked for public health data outside their practices was more than twice as high as the portion of primary care doctors who exchanged data electronically with PHAs. Asked why so many physicians sought this information from sources other than their county or state health departments, Kelley said it had to do with the completeness and quality of the data available from PHAs.

“In Indiana, providers are required to submit data on childhood immunizations, but not adult vaccinations. Consequently, the state immunization database has holes in it,” he noted. “Even with the childhood vaccinations, compliance is not 100%. So when a parent asks a doctor for a record of their son’s or daughter’s immunizations, and the physician queries the state public health database, and they’re not confident in the results they get back, they stop querying it.”

Practice Ownership, Size, and Type of EHR Are Factors

There was little relationship between practice size and the likelihood of electronic reporting to PHAs. For example, 17% of solo physicians said they did so, while just 12% of doctors in groups of more than 50 physicians reported that they did. And 17% of doctors in physician-owned practices electronically exchanged data with PHAs, just a couple of points less than for doctors in hospital-owned groups.

Physicians who used an EHR with a large market share had the highest rates of electronic exchange with PHAs and were also more likely to search for vaccination or immunization information from outside sources. One reason for this, suggested Kelley, is that the major EHRs have modules designed to exchange information with PHAs, but the EHRs typically used by independent practices tend to have less advanced interoperability features. Even if such an EHR can communicate electronically with a PHA, EHR vendors charge fees for these modules that many practices might find onerous.

The ONC report drew attention to the finding that a quarter of the respondents didn’t know whether their practices exchanged data electronically with PHAs. The authors surmised that these doctors were more likely to be in large practices and may not have been aware of electronic connections with outside entities. “Therefore, it is possible that reported rates underestimate rates of electronic exchange with public health.”

Health information exchanges such as IHIE can perform a vital function in helping to convey data from healthcare providers to public health agencies, he noted. Indiana gives hospitals the option of using IHIE for this function or reporting directly to the state health department online, but the majority use IHIE, he said.

Ken Terry is a healthcare journalist and author. His latest book is “Physician-Led Healthcare Reform: A New Approach to Medicare for All.”