“I was never particularly fit in high school,” says Troy Guerin, a 22-year-old student from Boynton Beach, Florida, “but during college my fitness deteriorated rapidly as I began using hard drugs.” He became addicted to heroin, dropping weight—by the time he turned 20, he was a skinny 130 pounds.

While getting sober in the summer of 2018, he started using the weight room at the rehab facility. Soon enough, he’d developed a passion for lifting. He started with a bro split hitting his back and biceps, then his chest and triceps, then his legs and shoulders. Nine months ago, though, he moved on to six days a week of Push-Pull-Legs. “That’s where I’ve seen the most progress,” he says.

At the beginning, he focused mostly on his protein intake. He had a general understanding of foods that provided fuel for building muscle. This summer, though, he started tracking his macros, aiming to eat around 3200-3500 daily calories, split into 20 percent fat, 50 percent carbs, and 30 percent protein.

He didn’t work with a trainer, but got lots of advice from friends who also lift. He also recommends the YouTube channel of Jeff Nippard, a Canadian bodybuilder and powerlifter who “does a great job of making scientific concepts palatable to a large audience.”

He quickly rebounded from 130 pounds up to 170. “I think that was my body just reaching the size it would’ve been if it wasn’t for the heroin and cocaine making me waste away,” he says. From then it took him about another 14 months to hit 190 pounds, the heaviest he’d ever been. “I gained a lot of strength, but weighing 190 took some getting used to as it’s much heavier than I’m used to,” he says. The bench press has always been his favorite exercise, and he’s upped his max from one rep of 185 pounds to two reps at 275 pounds. He gets compliments on his shoulders and traps, including from a supportive crew of friends and family. “They all know that I got sober but I don’t think they expected to see such a drastic physical difference,” he says.

“The discipline of getting to the gym 6 days a week is a trait that definitely carries over to other areas of life,” he says. He’d hit the gym at 6:30 in the morning, and that helped him start his day on a productive note. “But most importantly I think fitness has helped me stay sober, happy and healthy,” he says. “Valuing exercise and nutrition is such a drastic change from my old lifestyle of taking my health and life for granted.” The biggest challenge, he says, was learning to eat at a surplus, hitting more than 3,000 calories a day. 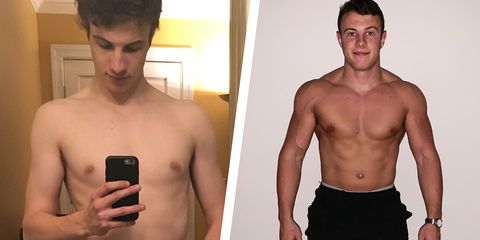 When it comes to advice, he says, “I can relate to wanting to get bigger and stronger, and feeling like it’s an uphill battle.” He says starting small is key—begin with lighter weights while you learn the right form. Instead of rocking a 40-pound dumbbell with bad form, start light and get things right. “That,” he says, “and eat. A lot.”