“Emotional eating” is typically cast as something shameful. Google the term and you’ll get webpage upon webpage dedicated to helping you to stop it – a weakness that should be controlled.

It’s a narrative that Dr Joshua Wolrich, a high-profile British doctor who combats diet myths on social media, has worried about during COVID-19: he argues that finding enjoyment and comfort from food is never something to feel guilty about, but particularly during a time of extreme mental stress. 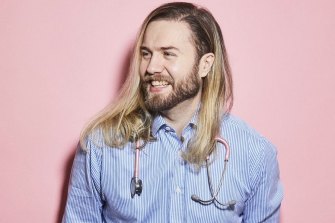 Dr Joshua Wolrich has built a following on Instagram for his myth-busting.

“We hate to think that eating in response to emotion might actually be a normal and good thing,” says Wolrich, 31, speaking on the phone from his home in London.

“But we don’t like to think that because anything that causes any sort of weight gain is inherently scary to us.”

The result is that many people are now reproaching themselves about their so-called “COVID kilos” rather than patting themselves on the back for getting through a tough time.

“People are then justifying behaviours that are more disordered than usual,” Wolrich says, “because that’s what guilt and shame do.”

Compounding this, he believes, is that we’ve gone backwards when it comes to how we view weight by incorrectly equating health with body size, and the pandemic has given people a reason to more openly stigmatise others because being overweight is said to increase the risk of severe COVID-19 symptoms.

“A lot of people have latched onto this personal responsibility rhetoric around health and weight,” Wolrich says. “There’s been a lot of condemnation not just from the normal trolls online but now from everybody and anybody.”

And he has noticed fitness professionals pushing a stronger focus on exercise as predominantly a weight-management tool: “[This] does exercise a massive disservice because it makes it unsustainable and unenjoyable.”

Wolrich, who is about to complete a master’s in nutrition, is known for his no-nonsense approach to diet and health misinformation, and the growing public hunger for this is evident: his follower count on Instagram has jumped by more than a third since March last year, now hitting close to 400,000, and he’s just released an aptly-named book, Food Isn’t Medicine.

Wolrich believes that while social media does of course cause harms – be it around body image or “nutribollocks” – there is a lot of potential for good. “I think we just need to be more aggressive with how we’re dealing with it.”

Wolrich made headlines last year when he roasted a post by singer Justin Bieber which suggested healthy food is medicine for anxiety and depression; he has criticised intermittent fasting, the restrictive diet Dr Michael Mosley is credited with pioneering; and he recently slammed a post by “medical medium” Anthony William – beloved by Gwyneth Paltrow’s Goop and creator of the celery juice movement – which claimed eggs cause gut and thyroid problems.

Sydney-based dietitian and nutritionist Lyndi Cohen has also devoted much of her social media to calling out what she labels “nutrition nonsense”, something she feels is increasingly important.

“We’re using social media more than ever, and a scary number of people are using it to source health information,” Cohen says. “Most diets now masquerade as ‘healthy lifestyle approaches’ when they are utterly unsustainable.”

Accredited practising dietitian Jonathan Steedman, from Brisbane, has a similar approach: “It might seem dramatic to call these messages dangerous, but every day in my clinic I see firsthand the damage this misinformation can do to people’s relationship with their food, body and self-worth. Incorrectly telling someone that ‘carbs make you fat’ may seem harmless, but that message can all too quickly develop into a lifetime of guilt and fear.”

Steedman shares Wolrich’s concerns over the obsession with losing weight gained over the last year.

“This unfortunately detracts from what should be the true purpose of diet and exercise: improving one’s physical and mental health,” Steedman says.

“To define one’s health based solely on a number on a scale is a dangerously reductionist approach to health and fitness. It just doesn’t tell the full story. It’s also extremely natural for our weight to change over time.”

Wolrich says he isn’t here to tell people they shouldn’t have a weight loss goal – he simply wants them to ask themselves why.

“Even though we say it’s about health a lot of the time it’s not. Or it’s about health but only if that health means being thinner. And that’s a dichotomy that we really struggle to let go of because it’s something that’s been so ingrained.”

Wolrich acknowledges he is not infallible. He has struggled with body insecurities – including during COVID-19 – and his journey on Instagram began in 2016 when he launched an account to document his weight loss, calling it @unfattening. He later renamed it @drjoshuawolrich.

“I have only been unlearning this stuff over the last four-ish years … There have been far more years of my life believing that weight loss was the end goal of everything that I did,” he says.

Weight loss isn’t a health promoting behaviour like exercising and eating vegetables, it’s just a potential outcome. And Wolrich stresses that trying to lose weight isn’t guaranteed to improve your health, rather it often negatively affects your relationship with food.

It’s this relationship that Wolrich’s new book aims to encourage people to respect and recognise as something to improve by listening to their body, honouring hunger and respecting fullness. Changing our dietary patterns is what can benefit our health, he says, not creating stringent rules around eating.

“When weight loss is the goal, the actions we take are only deemed to be working or valid if they result in weight loss … My response to all that is: lets just focus on your actual health.”

Get a little more outta life

Start your week with practical tips and expert advice to help you make the most of your personal health, relationships, fitness and nutrition. Sign up to our Live Well newsletter sent every Monday.