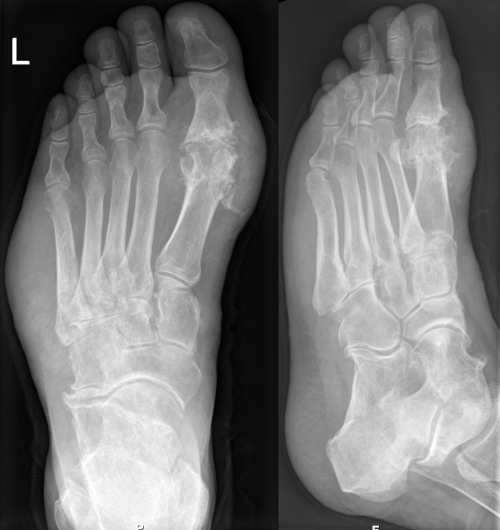 New research presented this week at ACR Convergence, the American College of Rheumatology’s annual meeting, shows that allopurinol and febuxostat may effectively lower urate levels when used in a treat-to-target approach. Importantly, both urate-lowering therapies were very effective with 90% of patients reaching target urate levels. Additionally, both appeared safe, with no evidence of increased cardiovascular toxicity.

Gout is a painful and potentially disabling form of arthritis. Gout occurs when excess uric acid, a normal waste product, collects in the body, and needle‐like urate crystals deposit in the joints. The first symptoms usually are intense episodes of excruciatingly painful swelling in single joints, most often in the feet, especially the big toe. Urate-lowering therapy (ULT) is a cornerstone treatment for gout management, but there is a lack of data to support the comparative efficacy and safety of the two major oral ULTs, allopurinol and febuxostat, when prescribed in a treat-to-target approach. There is also an urgent need to determine if these ULTs are safe and effective in gout patients with chronic kidney disease a common comorbidity. Researchers conducted this multicenter, randomized, double-blind, non-inferiority trial to compare the safety and efficacy of these two therapies for gout management.

“Gout affects 4% of the U.S. population and is one of the most painful chronic diseases,” says James R. O’Dell, MD, Chief, Division of Rheumatology, at the University of Nebraska Medical Center in Omaha and the study’s co-author. “Our trial is the first to compare allopurinol to febuxostat using the recommended treat-to-target, urate-level approach. This trial demonstrates that both agents are highly effective and safe when used in this way and, importantly, this was true in patients with chronic kidney disease as well.”

For the 72-week trial, 940 patients with gout and a serum urate concentration of 6.8 mg/dl or higher were randomized to receive either allopurinol or febuxostat between 2017 and 2019. Patients with persistent elevated uric acid levels in the blood, despite allopurinol treatment (300 mg/dl or less) were eligible, by design over one third of patients had chronic kidney disease, Stage 3. The trial had three phases: ULT titration from week 0-24, maintenance therapy from week 25-48 and observation with continued, stable ULT from week 49-72.

Patients received initial doses of either 100 mg of allopurinol with maximum titration to 800 mg, or 40 mg of febuxostat with maximum titration to 120 mg (reduced to 80 mg in 2019 at the request of the U.S. Food and Drug Administration). Patients also received anti-inflammatory treatments selected by the site investigator until the start of the third phase. The primary outcome was the proportion of patients who had one or more gout flares during the third phase.

Similarly, effectiveness and tolerability of the two drugs in Stage 3 chronic kidney disease patients were examined, as were serious side effects, and the proportion of patients who achieved a serum urate of less than 6 mg/dl by the end of the second phase of the trial.

During the third phase, 35% of patients taking allopurinol had one or more gout flares compared to 42% of patients taking febuxostat. Overall, 80% of patients in the trial achieved a serum urate level of less than 6.0 mg/dl, and 92% achieved a level of less than 6.8 mg/dl during the second phase, with no difference between the two treatments. There were also no differences in serious side effects between the two treatment groups, including the percentage of patients with cardiovascular events in people with or without chronic kidney disease. That final finding is important, because nearly one in every two gout patients suffers from renal insufficiency. Allopurinol was found to be non-inferior to febuxostat when prescribed as part of a treat-to-target approach in people with gout, providing two effective, safe treatment options for managing serum urate levels long term, the study’s findings show.