Home » Health News » Smoking Weed Could Be Altering Your Sperm DNA, and This Doctor is Concerned 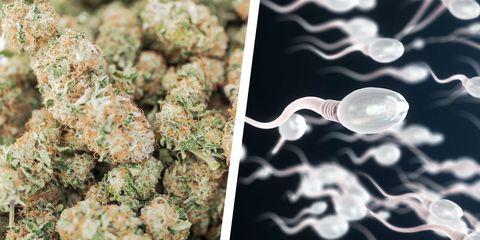 Here’s some news that might be a buzzkill: Smoking cannabis may lower sperm count and change the DNA of your little swimmers, according to a recent study.

Researchers from Duke University found that tetrahydrocannabinol (THC), the component of marijuana responsible for its psychoactive effect, may also be linked to a lower sperm count—which supports previous findings. And get this: THC was shown to attack genes in cellular pathways and change the structure of sperm.

Researchers are unsure if the changes are long-term, and whether the changes caused by environmental exposure could be passed onto offspring.

The small-scale study was published online Dec. 19 in the journal Epigenetics.

So how did they figure this out? Researchers compared the sperm of 24 men using semen samples. Half of the guys reported smoking cannabis at least once a week for the past six months, while the other half had not smoked weed in the past six months and reported using the drug fewer than 10 times in their lives. To ensure no one was lying about their drug habits, scientists measured THC levels to confirm accuracy. The study was also replicated in mice and produced the same findings.

Although the team found that THC changes sperm DNA, they’re not really sure what this means for guys trying to have kids.

“What we have found is that the effects of cannabis use on males and their reproductive health are not completely null, in that there’s something about cannabis use that affects the genetic profile in sperm,” said study co-author Scott Kollins, Ph.D., professor in psychiatry and behavioral sciences at Duke, in a statement.

However, at least one doctor is quite concerned about the study’s findings on weed and sperm. Dr. Nelson Bennett, MD, FACS and Associate Professor of Urology at Northwestern Medicine, tells Men’s Health that while there’s little evidence showing whether these changes in sperm are serious, “current research suggests that these changes are permanent and can be passed to offspring.”

It’s important to remember this study is super small, and much more research is necessary to determine how THC could impact sperm. But guys shouldn’t blow off the findings, according to Bennett.

“Men should be VERY concerned,” he said. “This study found a significant decrease in sperm count in those men using THC. This decease of roughly 40 percent in sperm concentration may make it difficult for men with already altered sperm counts to be sub-fertile.”

And if you’re worried about sperm health, it’s probably best to refrain from smoking (anything) at all, since the habit is linked to lower sperm quality and count.

This story was updated to include information from Dr. Nelson Bennett, MD, FACS and Associate Professor of Urology at Northwestern Medicine.