CIUDAD JUÁREZ, Mexico — Two days after arriving at a temporary migrant shelter at the border with the U.S. in June, Rosa Viridiana Ceron Alpizar’s 9-year-old daughter and 1-year-old son fell ill. Most of the kids in the converted gym had stomach issues after being served a meal of sausage and beans, she recalled.

Alpizar’s daughter quickly got better, but her son didn’t. José had a fever and diarrhea and was throwing up. When the shelter nurses couldn’t help, Alpizar sought out a private doctor, who prescribed antibiotics.

In mid-June, Alpizar, her partner, kids, and brother moved to Leona Vicario, a former factory that the Mexican government had converted to house migrants waiting to cross into the U.S. Weeks later, though, a doctor said her son still hadn’t improved. “He showed me the chart again and told me it was still the same,” Alpizar said in Spanish through an interpreter while at a shopping complex near the shelter. “He is still malnourished.”

Three years ago, Mexico had few shelters for migrants making their way to the U.S. People seeking asylum, like Alpizar and her family, presented themselves to U.S. authorities and were usually either detained in American facilities or released on parole while they awaited their proceedings. In either case, they had potential access to the U.S. health care system.

But a constellation of U.S. immigration policies, a growing number of asylum seekers and refugees, and the covid-19 pandemic have transformed Mexican border towns into holding areas for people who are waiting for policies to change and are hoping to cross and head north. And despite the Biden administration’s recent efforts to unwind some of those policies, little seems likely to change in the coming months. Alpizar and her family are now among thousands of people living in dozens of recently built Juárez shelters, just a few miles from El Paso, Texas. 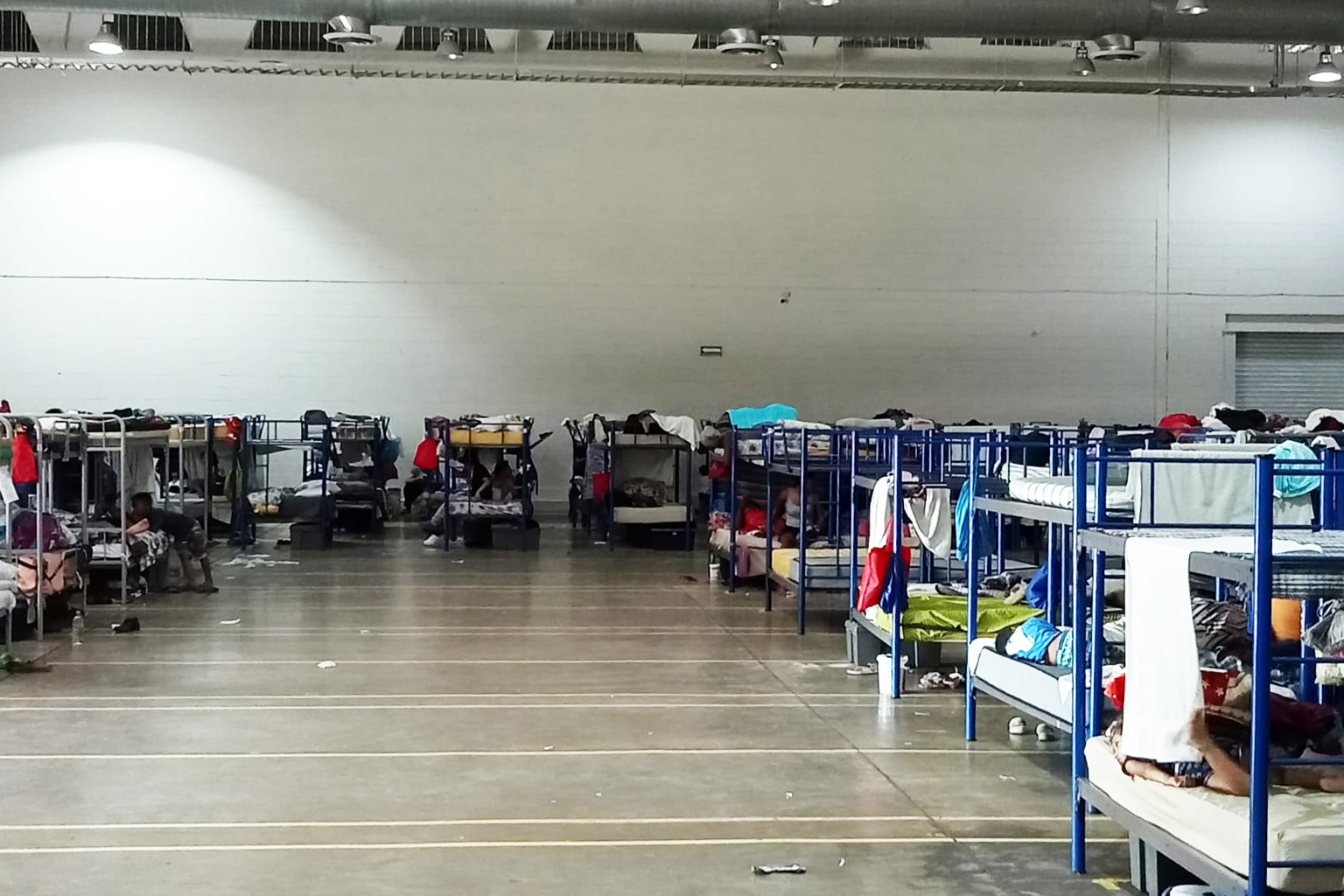 The wait — which can last months — has led some migrants, like Alpizar’s children, to develop health problems; exacerbated people’s chronic ailments, like hypertension or diabetes; left some in dire conditions without care; and compounded the trauma experienced by those fleeing their homes.

Under Title 42, a public health emergency order that the Trump administration first invoked in March 2020 to stop the spread of covid, Alpizar and her family are not allowed to present themselves at a border checkpoint and claim political asylum — they would be immediately expelled back to Mexico without a screening.

The policy, just one of several that have kept migrants in Mexico, is actually “counterproductive” to protecting people from covid, according to KFF research.

The Leona Vicario shelter has experienced outbreaks of chickenpox and measles since opening in 2019. It is still considered one of the better shelters because the Mexican government runs it. Nonprofit and private shelters operate with little oversight, and their quality varies.

Some migrants sleep in the streets. In general, conditions are making people sick, and care is limited, said Gabriela Muñoz, a project manager for Las Americas Immigrant Advocacy Center in Juárez.

Alpizar decided to travel to the border from Cuernavaca, a city south of Mexico City, she said, after an attempt to kidnap her children. The same day, her brother Angel and partner, Pablo Sandoval Arce, were beaten on their way home from a job painting an apartment. She told Pablo, José’s father, that it was not a coincidence.

Alpizar reported the incidents to the local police, she said, but was told that nothing could be done. A few days later, they arrived in Juárez with money from Alpizar’s aunt in South Carolina, who had helped raise Alpizar and her brother after their mother died. Alpizar is now trying to get an exemption to Title 42 that would allow her family to file an asylum application and join her aunt until their case is heard.

Las Americas gets about 4,000 calls a day, said Crystal Sandoval, director of strategic initiatives at the El Paso center. Only about 100 draw a response. About 70% of callers need medical attention — they require immediate cancer treatment, have a condition like diabetes that is out of control, or have developed anemia. Others have been sexually assaulted or have high-risk pregnancies. The group helps 60 to 90 people a week get exemptions, which allow them to apply for asylum and wait in the U.S. for their court dates.

Immigration advocates say that not only has Title 42 done more harm to public health than good, but the rule has been applied selectively. U.S. Customs and Border Protection have stopped migrants about 1.7 million times in the current federal fiscal year, which started Oct. 1. About half of those stops resulted in an expulsion under Title 42, according to the agency. About 65% of those were people from Mexico, while the vast majority of other expulsions involved people from El Salvador, Guatemala, and Honduras. In April, however, American authorities temporarily allowed Ukrainians in Mexican shelters to enter the U.S.

In many ways, the Alpizar family’s medical story isn’t the most extreme. Other migrants have immediate, life-threatening needs. In 2019, after five months waiting in a shelter, a Ugandan woman died in a Juárez hospital — the same week officials processed her asylum request. She died from sepsis, pneumonia, and tuberculosis, according to an autopsy.

Alpizar’s situation reflects how U.S. immigration policy has outsourced migrant care to Mexico, said Jeremy Slack, an immigration researcher at the University of Texas-El Paso, who first met Alpizar during a weekly visit to Leona Vicario.

Some nonprofits, meanwhile, seek to help migrants access care during their border waits. Hope Border Institute, a Catholic nonprofit, started a fund to assist them in seeing private doctors, paying for hospital stays, filling prescriptions, and covering transportation to appointments.

When a doctor advised Alpizar to put her son on a special diet, the family initially went shopping to buy him food not available in the shelter, which houses about 600 people. Later that day, however, when they checked a refrigerator that shelter residents share, the fruit and yogurt were gone. Pablo now shops three times a week, buying only small amounts to keep his son fed. 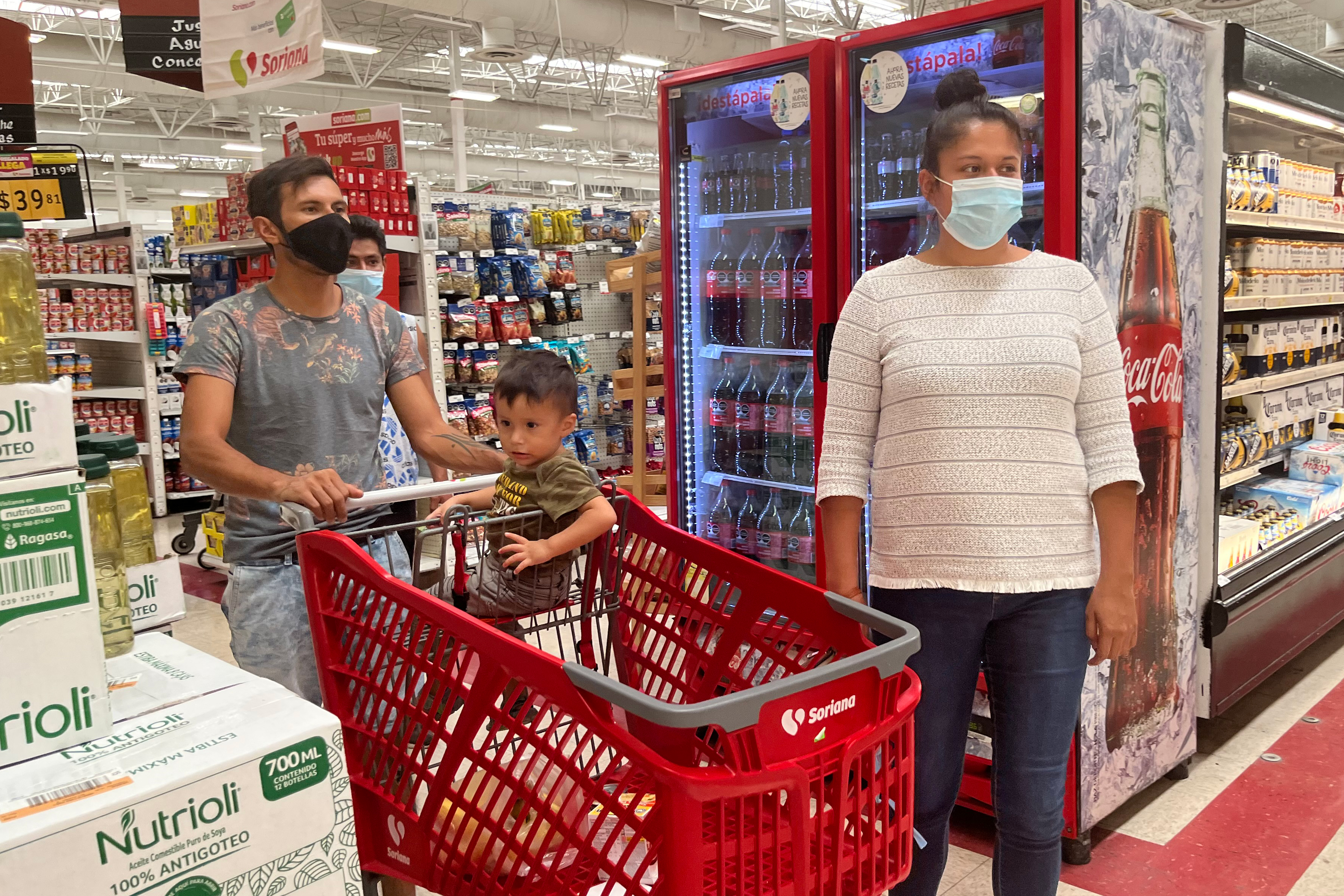 Then, in late July, a shelter doctor diagnosed José with conjunctivitis and gave him antibiotic eyedrops. Shortly afterward, his sister, Zoe, tested positive for covid, and the family was sent to the shelter’s isolation ward.

Gastrointestinal issues, respiratory illnesses like covid, and skin conditions are common in congregate facilities, like shelters, where people are packed into tight quarters, said Dr. Julie Linton, co-chair of the American Academy of Pediatrics’ Council on Immigrant Child and Family Health. She has treated many newly arrived kids who had multiple parasitic infections because they lacked clean water or access to sanitary conditions during their journey.

José could have something even more serious, but specialty care and testing are not available to migrants, said Dr. Bert Johansson, an El Paso pediatrician who volunteers in Mexican shelters.

Or José may just need a stable place to recover.

In July, Las Americas officials told Alpizar that she would have to wait at least eight to 10 weeks before learning whether her family would be granted an exemption.

Alpizar has considered crossing illegally but doesn’t have the funds. A sense of desperation has led migrants to make that dangerous journey.