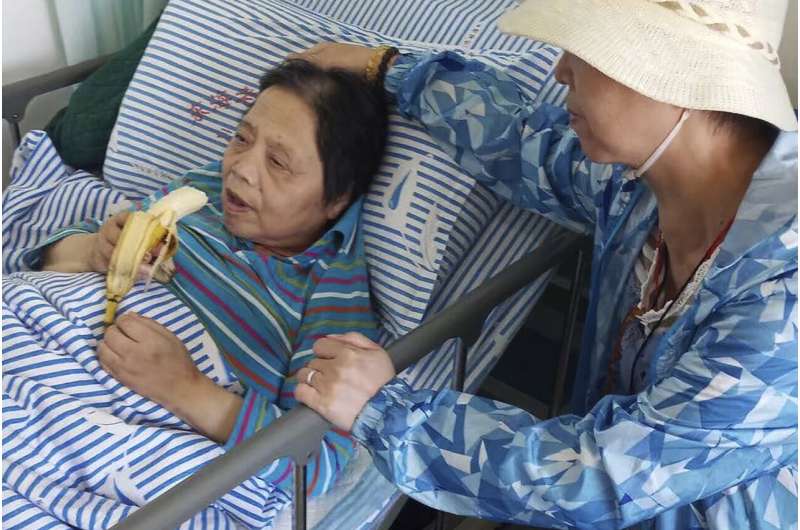 A series of deaths at a hospital for elderly patients in Shanghai is underscoring the dangerous consequences of China’s stubborn pursuit of a zero-COVID approach amid an escalating outbreak in the city of 26 million people.

Multiple patients have died at the Shanghai Donghai Elderly Care hospital, relatives of patients told The Associated Press. They say their loved ones weren’t properly cared for after caretakers who came into contact with the virus were taken away to be quarantined, in adherence to the strict pandemic regulations, depleting the hospital of staff.

Family members have taken to social media to plea for help and answers and are demanding to see surveillance video from inside the facility after getting little to no information from the hospital.

The conditions and deaths at the hospital are a sharp rebuke against China’s strategy of sticking to a zero-COVID policy as it deals with the outbreak in Shanghai in which most of the infected people don’t have symptoms. With a focus on forcing positive cases and close contacts into designated collective quarantine facilities, the costs of zero-COVID may be outweighing the risk of getting sick.

Shen Peiming, 71, was one such casualty. She died Sunday morning at the hospital, without any relatives by her side. A family member said they have been calling the hospital non-stop to find out the circumstances of Shen’s death, but have not gotten a clear answer. “How many times have there been lockdowns since 2020? They still don’t have experience managing this?” the family member said.

All they know is her doctor and nurses had not been there to care for Shen, who was partially paralyzed after a stroke. Her last nursing assistant had been quarantined for being a close contact of a positive case, the relative said, speaking on condition of anonymity out of fear of retribution. An unfamiliar worker called to inform them of her death. Later, the hospital said it was due to a chest infection.

The hospital had a COVID-19 outbreak, the family heard from orderlies, but Shen had tested negative as of last week.

Shanghai authorities have reported no deaths from this outbreak, but questions have been raised about the reliability of the data. A city health official, speaking on condition of anonymity because of the sensitivity of the topic, said that the criteria for confirming cases and deaths are very strict and susceptible to political meddling.

It is unclear how many patients have died at the hospital, and whether any died of COVID-19. Families say they are talking with other families whose relatives have also died. An article from Chinese news outlet Caixin describing the deaths and infections was taken down shortly after it was published, apparently targeted by censors. Calls to the main office of Donghai Elderly Care went unanswered. The Shanghai government did not respond to a faxed request for comment.

Most experts agree that China’s zero-COVID approach was highly successful in keeping deaths to a minimum when there were limited drugs or vaccines. But now that shots are widely available in China, and with the advent of the omicron variant, many say the government should abandon the policy and focus medical resources on the elderly and vulnerable instead. 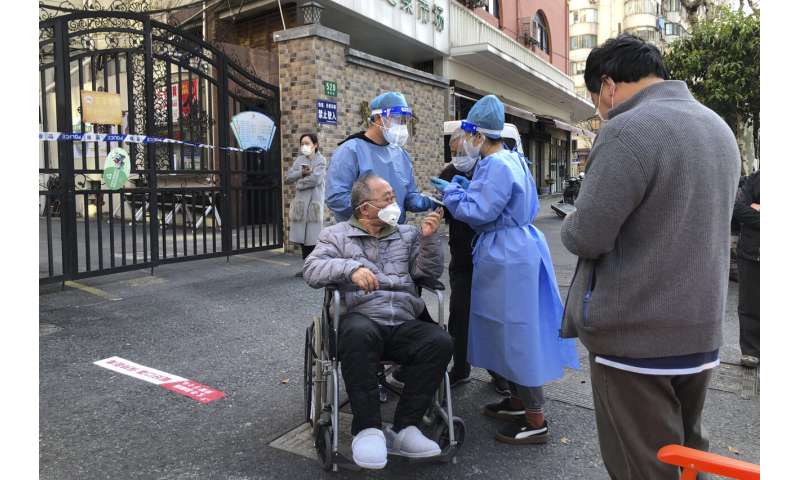 Instead, Shanghai has locked down its 26 million people and carried out repeated mass testing to tackle an outbreak driven by the highly contagious omicron BA.2 variant. On Saturday, the city reported more than 23,000 new local cases, of which only 1,015 had symptoms.

“If you’re asymptomatic, what’s going to hurt you?” said Ray Yip, the founding director of the U.S. Centers for Disease Control office in China, who maintains close ties with Chinese health officials. “The only people who get sick are those with diabetes, obesity, chronic disease, old people. Protect those people. You can protect them.”

A low vaccination rate among the elderly, though, remains a concern. Only 62% of Shanghai residents over 60 have been vaccinated, according to the latest data available. Some experts support the strict approach, saying China needs to raise that rate before it can safely live with the virus.

The U.S. guidelines for asymptomatic cases, as in the U.K., are that individuals isolate at home for five days. In Shanghai, workers are rushing to set up massive temporary facilities in exhibition halls and elsewhere to try to house everyone who tests positive.

The citywide lockdown has disrupted daily life and the economy. Many residents, trapped in their apartment buildings, are scrambling to buy food through apps and place bulk orders with neighbors. Some in quarantine have posted videos showing chaotic scenes of people rushing to get food and a lack of clean toilets. Others have posted pleas for relatives who need medicine urgently.

The U.S. said Friday that it is allowing the voluntary departure of non-essential personnel and family members from its consulate in Shanghai because of the situation.

The government has trumpeted its success in curbing COVID-19, touting it as evidence of the superiority of China’s governing system—especially compared to Western democracies, where deaths have far exceeded China’s. That narrative, experts said, is making it difficult for Beijing to switch tactics.

“They bragged too hard to their own people about how wonderful they are, and now they’ve painted themselves into a corner,” said Yip. “The only way they can control Shanghai now is to repeat what they did in Wuhan.”

The 11 million residents of Wuhan were locked down for more than two months at the start of the pandemic in 2020.

Shanghai’s lockdown is an abrupt about-face from just a month ago, when some Chinese health experts publicly suggested softening pandemic control measures. 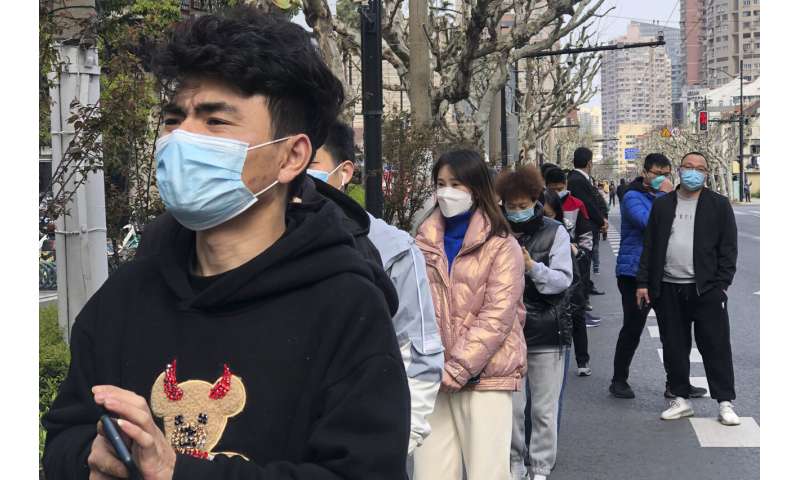 The city’s economic importance and advanced healthcare system left officials reluctant to impose strict measures and confident about combating any outbreaks. Further, Chinese leader Xi Jinping ordered that ongoing outbreaks in China be controlled at “minimum cost” in mid-March, emphasizing Beijing’s desire to protect the economy while curbing the virus.

Shanghai took targeted steps, locking down individual office buildings, shopping centers and neighborhoods for 48 hours at a time but otherwise allowing life to go on as usual.

With the soft measures, the city’s case count rose. The outbreak spilled over to at least 71 other cities, according to a notice posted by Guangxi province in southern China, and pressure grew for harsher measures.

On March 28, the city started an eight-day lockdown in two phases, which has since evolved into a citywide one with no end in sight.

“There is no time to waste,” Chinese Vice Premier Sun Chunlan said on a visit to the city last weekend, according to a government statement. “We need to move forward faster and harder to provide strong support for the elimination of cases in society.”

The actions sent nurses and doctors into quarantine, causing conditions to worsen at Donghai Elderly Care.

Chen Jielei said the outbreak at the hospital infected her unvaccinated, partially paralyzed 81-year-old mother. Because staff members also fell ill, her mother wasn’t served meals on time and her sheets were unchanged for days. After a few days, a replacement worker started taking care of her.

A college professor who spoke on condition of anonymity because he was afraid of retribution, said his family wasn’t notified for more than a day after his 82-year-old father died on March 31. His last contact was on March 28 with a nursing assistant who called to warn there were positive cases and they could no longer take care of his father.

“In those three days, what happened to my father? What kind of mistreatment did he suffer?” he asked. His father’s condition had been stable on March 28 when he spoke with the nursing assistant.

Shen had lived on and off in the hospital for three years after her stroke. Family members visited every week. But visits were banned in early March as the COVID-19 outbreak spread through Shanghai, the relative said. 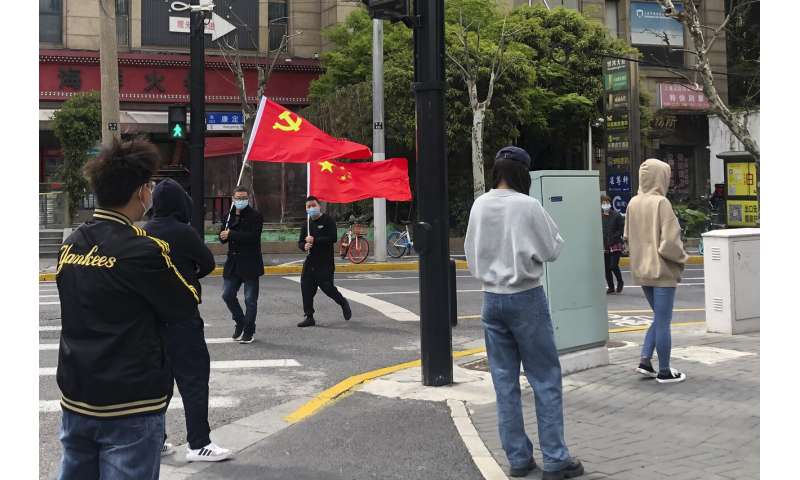 They were not worried initially because the hospital had always been very responsive and they were in contact with the nursing assistants who took care of Shen. But one orderly warned on March 26 there were positive cases and many of Donghai’s staff were being quarantined.

The woman, who gave only her last name of Zhang, said an employment agency told her it was a cleaning job.

“They said your work is just to clean, you won’t even have to wear a protective suit. But what they said was completely different from what I had to do,” she said.

Shen needed to be assisted with eating through a tube by having her food blended into a liquid. She also had a tube in her throat that had to be disinfected each day.

“In the past, if there was an issue, they’d always call me. This time, there wasn’t even a voice message, and she died so suddenly,” the relative said. Now the hospital is asking the families to sign a form to cremate the deceased. Shen’s relative said the family will refuse until they get a clear answer.

The hospital sent an apology letter Wednesday to some of the families. The AP has viewed a copy.

“Because of the outbreak’s emergency, and many of the seniors had not been vaccinated, this caused those with severe underlying illness and weak health to die,” it said.

While Chinese government researchers have begun exploring ways to end zero-COVID, the government continues to punish officials with large outbreaks on their turfs.