You CAN rub things better! Stroking your elbow or toe after injury may really help ‘by cancelling out the agony’ with soothing touch

It is the automatic reaction after banging an elbow or stubbing a toe.

After yelping with pain and a few strong words, most people try to rub the injury better.

Now scientists suggest this may actually work, as stroking your own skin may cancel out the sensation of pain.

People asked to stroke their arms in a study were less able to feel narrow plastic sticks being poked into their arm.

When zapped with weak pulses of electricity in their thumbs, they took longer to register the feeling in their brain. 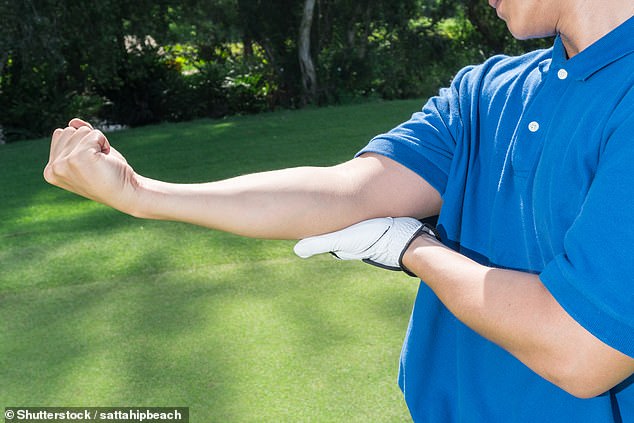 It is the automatic reaction after banging an elbow or stubbing a toe. After yelping with pain and a few strong words, most people try to rub the injury better

We are programmed to react when others touch us but not when we touch ourselves, which is why most people cannot tickle themselves.

The advantage of this may be that rubbing your own arm or stubbed toe shuts down the brain’s response to touch, so that pain does not register either.

Dr Rebecca Böhme, who led the study from Linköping University in Sweden, said: ‘As very young children, we learn that our parents will rub the spot better when we get hurt.

‘As we get older, we rub our elbow when it gets hurt instinctively without even thinking about it.

‘Our research used uncomfortable rather than painful stimuli, but the evidence does suggest that rubbing a hurt part of the body better may work by reducing activity in the somatosensory part of the brain.’

As part of the study, researchers zapped 10 people with 300 weak pulses of electricity through an electrode at the base of their thumb.

DID WE ALREADY KNOW THAT RUBBING AN INJURY HELPS WITH THE PAIN?

Gently rubbing a bump or scrape really does make it feel better, a study showed almost a decade ago.

Scientists found that people experience far less pain when they touch a sore part of their body with their hand.

However, rubbing away pain only seems to work when we do it to ourselves, the researchers said.

The finding helped explain why most of us instinctively clutch an arm or leg when it is injured – but are usually reluctant to let anyone else go near it.

The British scientists behind the study said that touching an injury helps to reset the brain’s internal ‘map’ of the body – a process that appears to play a key role in the perception of pain.

The researchers studied the soothing power of touch using a well-tested laboratory experiment that inflicts pain on volunteers without causing physical damage.

Professor Patrick Haggard of University College London, an author of the study, said: ‘The index and ring fingers are placed in warm water and the middle finger in cold water. This generates a paradoxical feeling that the middle finger is painfully hot.’

It was not painful but the pulses were strong enough to cause someone’s thumb to twitch.

People asked to stroke their own arm while this was happening took longer to register the feeling in their brain, based on readings from electrodes on their heads.

The same benefit was not achieved when a researcher stroked their arm.

A separate group of 17 people were poked with thin plastic sticks while stroking their own arm.

This should have been uncomfortable, but for those people rubbing their arm, the plastic strand had to be pushed into their skin with 100 times the force for them to feel it. That was compared to those being touched by someone else.

The study suggests a partner or friend rubbing your arm when it is hurt won’t work, based on a separate experiment putting people in MRI machines.

This showed their brains lit up when someone else stroked their arm.

But the action of someone soothingly stroking their own arm was found to have little effect on the brain, except that the movement activated a region called the M1 which has been found in other studies to reduce pain.

The study, published in the journal Proceedings of the National Academy of Sciences, said: ‘This might provide a mechanistic explanation for the widely-observed behaviour of rubbing a hurting spot of one’s own body.’

Experts believe someone else’s touch has so much effect because we are social creatures who use touch, like holding hands or hugging, to bond with each other.

When we touch ourselves however, it has far less significance and we know it is coming, so the signals sent from nerve endings in the skin to the spinal cord and brain are less strong.

The helpful knock-on effect could be that other sensations, like pain, are less strong, but only when stroking the precise part of the body which has been hurt.

People zapped on their thumbs were helped by rubbing their forearms because the radial nerve runs from the thumb up the arm.

Dr Böhme added: ‘We saw a very clear difference between being touched by someone else and self-touch.

‘In the latter case, activity in several parts of the brain was reduced. We can see evidence that this difference arises as early as in the spinal cord, before the perceptions are processed in the brain.’