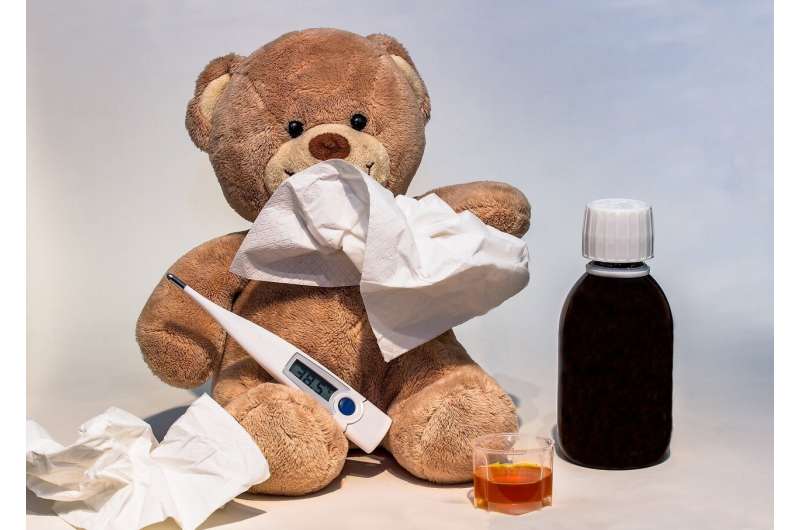 When children go back to school, parents go back to monitoring their kids’ coughs, sniffles, fevers, and other symptoms of illness. But this year will be different. Common colds and other viruses that nearly vanished during the COVID-19 pandemic are starting to return, and no one knows for sure how that will play out at home and in classrooms.

That’s because fewer people are practicing infection control, even as the highly contagious omicron and its subvariants (like BA.5) continue to circulate. Doctors believe that relaxing mitigation efforts could open the door to non-COVID diseases, which are behaving erratically—for instance, causing infections at odd times of the year.

“My biggest concern is that we’ve seen a ton of viral infections just over the summer,” says Magna Dias, MD, a Yale Medicine pediatrician. “So, when we get back to indoor settings with kids being together again, it could mean that we will see more infections happening—both with COVID-19 and with other viral infections.”

This means parents will need strategies to protect their kids from all kinds of infectious diseases—not just COVID-19. Yale Medicine experts answered some common virus questions on parents’ minds as kids head back to school.

1. What viruses should parents be concerned about this fall?

“We’re paying attention to everything,” says Thomas Murray, MD, Ph.D., a Yale Medicine pediatric infectious diseases specialist. He notes that many types of viruses circulate among kids in a given year, including influenza and rhinoviruses, which cause common colds and are not typically worrisome. But there are many other viruses that parents should look out for, including:

2. What does it mean when viruses appear during an ‘off-season’?

Right now, there is a heightened sense of unpredictability around all infectious diseases.

The timing of influenza cases is an example of erratic viral behavior that has already occurred this year. This past May, at the end of another mild pandemic flu season, cases ticked upward when they should have petered out, and the season extended into June, which is rare, Dr. Murray says.

In one week in July, for example, the summary included RSV, flu, parainfluenza virus, adenovirus, HMPV, rhinoviruses, PeV, and norovirus, most of which are rarely seen in the summer. These numbers reflect a phenomenon experts are monitoring around the world.

While the numbers were low—only one case of PeV that week, for instance—it is still worth noting that those types infections occurred off-season, Dr. Murray explains.

“Nobody knows whether that means things are going to be really bad this fall or whether we’ve got a new situation where all of these viruses will ebb and flow regardless of the month,” says Dr. Dias.

Dr. Dias says at this point the answer, as far as individual infections are concerned, seems to be no. “I think we’re seeing potentially the same percentage of people getting admitted to the hospital, but a larger number because there are just more people getting sick right now.”

Viruses tend to spread themselves out, and it is unusual for kids to get more than one virus at a time. But some young patients admitted to Yale New Haven Children’s Hospital in May and June this year were diagnosed with two or even three viruses at the same time.

“We have seen that before, so it’s not completely unusual, but it does seem to be happening more now than it did before,” Dr. Dias says.

4. Should parents still worry about the coronavirus this fall?

Yes; it remains a threat to kids and adults, both doctors say.

In the same Yale virology report that showed a July week with very small, but unusual, counts of non-COVID viruses, COVID-19 cast a large shadow with 842 cases. “With BA.5, there is a lot of risk because there is a lot of virus around,” Dr. Murray says.

Children tend to experience mild disease with COVID-19, but prevention remains important, since a significant number of children have died from the disease, explains Dr. Dias. Some also develop long COVID, a condition marked by lingering symptoms that is not yet well understood, she adds.

5. What symptoms should parents look for?

Many respiratory infections share similar symptoms, and Dr. Murray doesn’t expect those symptoms to be different than in previous years. “They include high fevers and difficulty breathing. If there is a new rash or you are worried about your child’s breathing, you should make the pediatric provider aware,” he says, adding that some symptoms can be signs not only of viruses, but also of other bacterial infections and/or typical baby infections.

In the case of COVID-19 and flu, the CDC lists a wide range of symptoms, including cough, shortness of breath, runny or stuffy nose, fatigue, sore throat, and even loss of taste or smell (although the latter is more frequent with COVID-19). In both cases, symptoms can vary from person to person: Some children have no symptoms at all; others have cases that range from asymptomatic to mild to severe.

6. When should a parent call the pediatrician?

While it’s not necessary to call about every symptom, some can be confusing, says Dr. Murray. “Any time a parent is concerned, it’s best to call and be reassured.”

It may also be important to call the doctor if a child has a chronic medical condition, since that puts them at higher risk for severe symptoms or complications from viruses. The same goes for young babies, Dr. Murray adds.

Parents should also contact their pediatrician if a baby younger than three months old has a fever or is difficult to console. “If they’re cranky and you hold them and they settle down, that’s fine. But if you hold them and they’re still absolutely irritable—and you cannot calm them down no matter what you do—that’s a baby that needs to be evaluated,” he says.

7. How can doctors diagnose a child when there are different viruses with similar symptoms?

If a child has respiratory symptoms, the first thing a pediatrician will do is recommend a COVID-19 test. “The symptoms for many of these diseases overlap considerably,” Dr. Murray says. “So, it can be virtually impossible for a doctor to tell the difference between COVID-19 and another virus without a test.”

If the COVID test is negative, it’s helpful to know that mild colds or viruses usually start to get better in a few days, but if symptoms get worse, the doctor might consider testing your child for the flu, which can benefit from treatment.

Testing for RSV is done mostly for surveillance purposes. But it’s also helpful in deciding whether to isolate a child from other children if they are in the hospital, or at home with a sibling who either has a chronic medical condition that puts them at risk or is a very young baby.

8. How can parents treat kids for these illnesses?

While each virus is different, many of the common respiratory ones respond to the same types of therapy, explains Dr. Murray. “If the COVID test is negative, most of the time parents just need to make sure that the baby or child is OK—and that their breathing is OK—and provide supportive care,” Dr. Murray says. They should make sure their children are well-hydrated, and give them over-the-counter medicines, like ibuprofen or acetaminophen, if they have a fever, he adds. “The vast majority of kids are going to do fine with that.”

If their symptoms continue, parents need to talk to the health provider again, he adds.

9. How can parents help their kids to stop coughing?

“If they’re above age 1, we recommend giving a teaspoon of honey, which has been shown in clinical trials to actually help with cough,” says Dr. Dias. “They usually cough the most when they’re sleeping because they’re lying flat, and that position disturbs the child from sleep.”

For children ages 1 and older, she also advises putting two pillows under the child’s head or raising the head of the bed so they are sleeping on an angle “so that gravity can help phlegm flow downward,” she adds.

10. Why are COVID-19 and flu vaccines important for kids and when should they get them?

“Vaccination is really the number one tool that we have for preventing many infectious diseases,” says Dr. Dias. When so many viruses are circulating, it can reduce confusion, she adds.

While the flu shot is not always a perfect match for the predominant strain in a given year, it’s a strong tool for preventing an infection that can be deadly in some children. Also, it can mean the difference between mild and severe illness in a child who gets sick despite getting the vaccine.

There is no vaccine yet to prevent RSV infection.

If possible, Dr. Murray encourages families to schedule a wellness checkup before school starts to assess their children’s overall health and to update them on immunizations they may have missed during the pandemic, including vaccinations against measles, pertussis (whooping cough), and other diseases.

“When the vaccination levels in the population go down, these viruses do come back,” says Dr. Murray. He adds that measles, in particular, is “super contagious and kids can get quite sick from it.”

11. How do you keep children healthy without worrying them?

Mental health issues among kids are a major concern, says Dr. Murray. Parents should avoid piling new worries on top of any anxiety kids may already have about school. “The primary mission now is to figure out how to do things as safely as possible, because it’s important for everyone’s mental health.”

The period before school starts is a good time to have conversations about mental health or anything kids have on their minds, Dr. Murray adds. “You can also take time to talk at dinner, go for an evening walk, or go for a hike on the weekends,” he says. “Spend time talking to your kids about how they’re doing.”