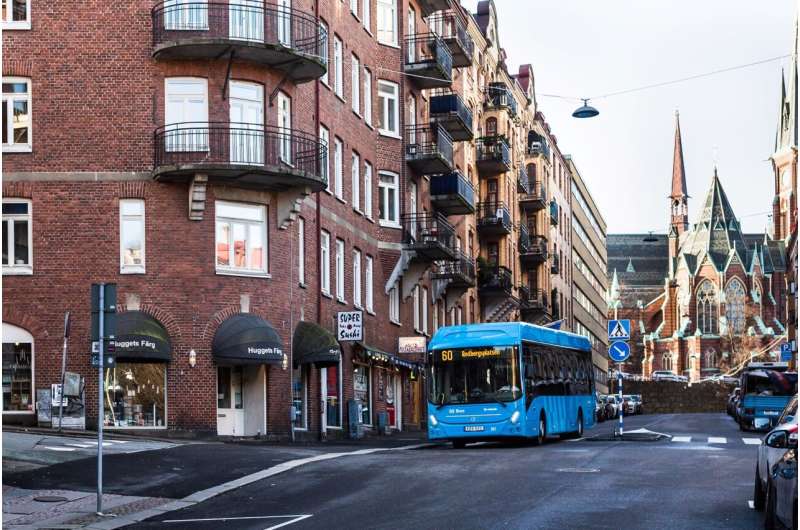 The health of residents living alongside a bus route in Gothenburg, Sweden, became considerably better when hybrid buses were replaced by buses fully powered by electricity. Along with the noise levels there was a reduction of fatigue, daytime sleepiness and low mood, a study at the University of Gothenburg shows.

In fall 2019, all-electric buses were introduced on bus route 60 in Gothenburg. The implementation was linked to the ElectriCity project, with its participants from industry, research, and public agencies working for sustainable travel in an urban setting.

In places, the roads along this bus route are highly uneven. Noise levels from the preceding system of bus transportation had been perceived as disturbing, especially on the uphill stretches. Previous noise-level measurements had indicated that disturbance from low-frequency noise in indoor environments was present in the residential area.

How much the electric bus transportation would affect the noise levels was not clear, and the same applied to how people’s health would be influenced. The low-frequency noise was particularly important, since it has a high disturbance potential and it is not as well-attenuated by façades or noise barriers.

“We can be disturbed by different noises, but the issue with low-frequency noise is that it’s attenuated less well by facades or windows and therefore intrudes into people’s homes more easily. Even small increases in its level are perceived as very noticeable,” says Kerstin Persson Waye, Professor of Environmental Medicine at Sahlgrenska Academy, University of Gothenburg, who heads the Sound Environment and Health group that conducted the research.

The study involved questionnaire surveys of randomly selected residents in two phases, before and after the switch to electric buses. Half of the residents lived in homes that lined the bus route in two city districts: Masthugget and Lunden. The other half, who lived some distance away, made up the reference group.

In parallel, noise measurements were performed in several homes—including indoors, which is not otherwise standard procedure. These measurements required special rigging with 10-12 microphones in each dwelling unit to provide correct and representative data of the low-frequency noise.

The changes that took place between phases one and two were clear and statistically significant. They applied to changes of the sound levels, especially in the low frequencies, those the residents themselves noticed, and their reported noise annoyance. For example, the proportion of respondents who noticed noise from buses fell from 75 to 39%, and the proportion who were noise-annoyed to a very high degree decreased from 26 to 5%.

There was also a clear reduction of perceived health effects. The proportion who felt exhausted once or twice a week declined from 49 to 39%—that is, down to the same proportion as in the reference group. The proportion who were in a low mood decreased from 22 to 17%, and considerably fewer also stated that they were very sleepy in the daytime.

“So, there was an improvement: People felt significantly better. Although we can’t say with certainty that the results reflect the whole population and how lasting the positive health changes are, we think they may be generalizable in residential settings where bus transportation makes up a large share of the exposure. Given, too, that other forms of transportation in the urban environment are getting more silent, this could influence public health,” Persson Waye concludes.