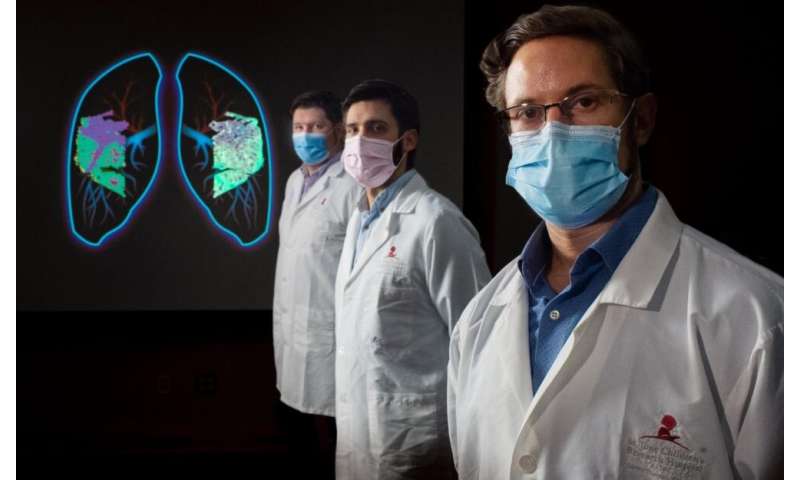 St. Jude Children’s Research Hospital scientists have identified fibroblasts as the cells that serve as the gatekeeper of the inflammatory immune response in the lungs following influenza and other respiratory infections. Research is underway to translate the findings into treatment to preserve lung function and improve patient survival. The findings appear online today in the journal Nature.

Fibroblasts are cells that make up tissue needed for proper lung function, and they help coordinate immune response. Researchers showed that viral infections can induce some lung fibroblasts to increase production of cytokines and the enzyme ADAMTS-4. Cytokines drive inflammation, and ADAMTS-4 degrades a key lung protein. The changes promote inflammation and widespread tissue restructuring at the expense of lung function.

When researchers eliminated ADAMTS-4, survival of mice infected with influenza improved. Enzyme levels in the lower respiratory tract were also associated with respiratory symptom severity in children and adults hospitalized with seasonal and avian flu. Patients with higher levels of ADAMTS-4 had more severe symptoms, were more likely to need mechanical-breathing support, and were at greater risk of death.

“People who die of the flu often have controlled the virus but have suffered extensive lung damage,” said corresponding author Paul Thomas, Ph.D., of the St. Jude Department of Immunology. “The damage is caused by infiltrating immune cells responding to the infection, but the mechanism involved was unclear. By focusing on the interface between the immune response and lung function, we not only identified a mechanism, but also a promising approach to treatment where none currently exists.”

Flu and flu-related pneumonia remain leading causes of death in the U.S. Existing antiviral drugs like Tamiflu must be given within the first few days of the infection to be most effective. Patients with severe respiratory complications must rely on supportive care, including mechanical ventilators, because no effective treatments exist.

A successful immune response requires a delicate balance. The response must eliminate the virus or other pathogens without causing collateral damage by triggering runaway inflammation.

Thomas and his colleagues used a variety of methods to demonstrate that fibroblasts serve as gatekeepers during flu infections. The investigators showed that respiratory viral infections can trigger the lethal inflammatory response by activating lung fibroblasts called damage-responsive fibroblasts. The cells pump out cytokines that fuel inflammation and ADAMTS-4, which degrades the structural lung protein versican.

“This study shows that ADAMTS-4 is the primary regulator of versican degradation in the lungs of mice infected with flu,” said first author David Boyd, Ph.D., a postdoctoral fellow in the Thomas laboratory. “Degradation of versican has a major impact on lung function.”

Fibroblasts are best known as components of connective and supportive tissue, but in this research, they play a starring role in the inflammatory response. St. Jude researchers used technologies like single-cell and spatial transcriptomics to reveal the crucial role the cells play in balancing inflammation and lung function.

“These next-generation techniques allowed us to finely map gene expression patterns both to individual cells and to specific locations in the lung,” said co-author Jeremy Chase Crawford, Ph.D., of St. Jude Immunology, who led the technology development and data analytics for the project. “Spatial transcriptomics dramatically increased the amount of information we get from tissues, so we are happy that we got the technology working not just for this project, but for other researchers at St. Jude as well.”

The novel approach showed that fibroblast activation differed in distinct regions of the lung and that activation was associated with severe lung damage. In the same areas where scientists found extreme tissue damage, ADAMTS-4 was always close by.

Researchers reported that when ADAMTS-4 was eliminated, versican structure was preserved in the lungs of mice, and the animals lived longer. Intact versican has multiple roles in maintaining lung health and function.