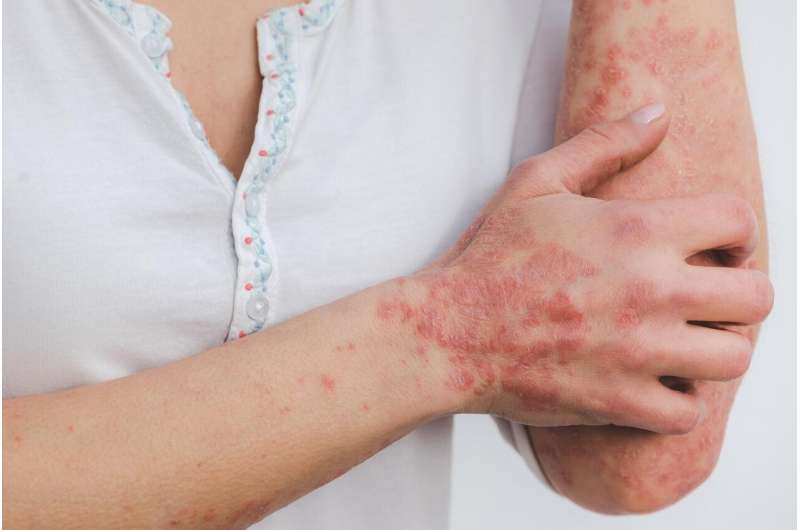 Psoriasis may be underdiagnosed in UK primary care settings, according to research led by researchers from The University of Manchester. The findings, published in the British Journal of General Practice, show that missed opportunities for early diagnosis of the potentially debilitating condition are relatively common in general practice.

Doctors already know that delays in the diagnosis and initiation of treatment are associated with deterioration in patients’ quality of life. GPs are most often the first point of contact for people with the condition, rather than dermatologists.

Patients who are later diagnosed with psoriasis, find the researchers, are twice as likely to be prescribed steroid or antifungal creams than people without psoriasis, which may mask the signs and symptoms of psoriasis and contribute to a further delay in diagnosis.

“We already know that early diagnosis of psoriasis can improve the effectiveness of treatment for psoriasis, so these findings are pertinent,” said lead author Maha Abo-Tabik, a Ph.D. research student at The University of Manchester. “The World Health Organization, for example, has highlighted how many people suffer needlessly from psoriasis due to missed or delayed diagnosis. That is why we think it is essential to design additional dermatology training for primary care professionals to improve their diagnostic skills for psoriasis.”

The researchers carried out extensive analysis of electronic health records from more than 700 general practices between 2010 and 2017 across the UK, comparing clinical diagnoses and treatments between people with and without psoriasis. 17,320 psoriasis cases and 99,320 controls were used from the Clinical Practice Research Datalink Gold database.

They were also more likely to report symptoms of psoriasis such as dry skin, rash, skin texture changes and itching than controls up to five years before diagnosis. And they were prescribed topical corticosteroids or topical antifungals in the year before diagnosis twice as often as those without psoriasis.

GPA Director, Chris Griffiths is Emeritus Professor of Dermatology at The University of Manchester, Head of the Dermatology Theme at the NIHR Manchester Biomedical Research Centre and Honorary Consultant Dermatologist at Salford Royal NHS Foundation Trust.

He said, “Psoriasis is long-term disease affecting around 3% of people in the UK, which substantially affects their quality of life and is linked with other serious medical conditions such as arthritis, heart disease and depression.

“The findings from this study suggest the diagnosis of psoriasis may be missed or delayed by up to five years for some individuals hence leading to a potentially detrimental delay in establishing an appropriate treatment regimen.