A US medic who was quarantined amid fears he caught Ebola while treating patients in Africa has been released from hospital.

The unnamed physician, 39, did not display any symptoms during his three-week stay in medical isolation at a hospital in Nebraska.

He had been in quarantine since December 29, after returning from the Democratic Republic of Congo, where an Ebola outbreak is ongoing. 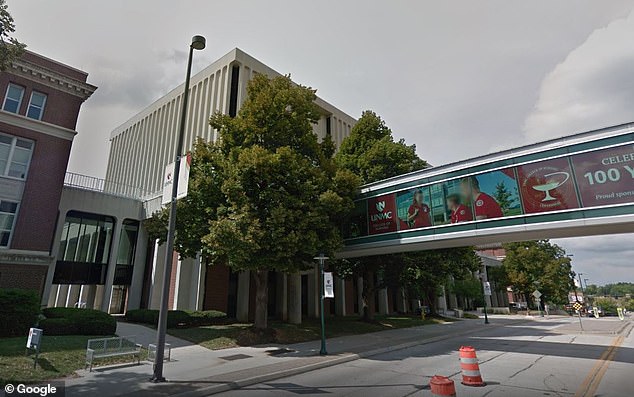 Reports state he treated a patient who tested positive for the killer virus while working at a missionary hospital in the African nation.

Medics at the Nebraska Medical Center in Omaha revealed the man did not show any symptoms of Ebola during his entire stay.

The facility announced late last month that it was housing the person in a secure area not accessible to other patients or the public.

Symptoms of the virus – one of the most lethal known to science, including fever and abdominal pain, can take three weeks to appear.

Officials said the man, who was not named for privacy reasons, left the city. It is unknown where in the US he lives.

If symptoms of Ebola had developed, the medic would have been moved to the Nebraska Biocontainment Unit. 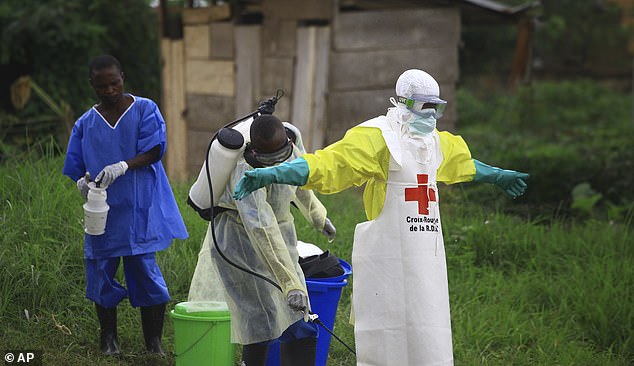 Latest figures from the DRC reveal 385 people have died since the current outbreak began ripping through the country last August (pictured: a health worker sprays disinfectant on his colleague at a treatment centre in Beni, DRC)

The centre is one of only a few in the US for treating highly infectious and dangerous diseases. It treated three Ebola patients in 2014.

Reports suggest the medic was given an experimental Ebola vaccine as a post-exposure preventive precaution.

The virus can be transmitted between humans through blood, secretions and other bodily fluids of people – and surfaces – that have been infected.

A patient in Sweden was also feared to have been struck down with Ebola earlier this month, after he returned from Africa.

However, health officials later admitted it was a false alarm, with tests carried out on the unidentified patient showing no signs of the deadly virus.

The patient came home from a trip to Burundi, in central Africa. The only cases of Ebola reported in Africa this year have been in the DRC.

Ebola – a haemorrhagic fever – killed 11,000 people and ravaged West Africa during an epidemic between 2014-15.

Latest figures from the DRC reveal 385 people have died since the current outbreak began ripping through the country last August.

The DRC outbreak, known to be the second most deadly outbreak in history, is expected to rage on into the middle of this year.

The outbreak in the African nation has been difficult to control because of armed violence and community protests.

No cure currently exists for the pathogen, however, scientists are currently trialling a variety of experimental vaccines.

WHAT IS EBOLA AND HOW DEADLY IS IT?

Ebola, a haemorrhagic fever, killed at least 11,000 across the world after it decimated West Africa and spread rapidly over the space of two years.

That epidemic was officially declared over back in January 2016, when Liberia was announced to be Ebola-free by the WHO.

The country, rocked by back-to-back civil wars that ended in 2003, was hit the hardest by the fever, with 40 per cent of the deaths having occurred there.

Sierra Leone reported the highest number of Ebola cases, with nearly of all those infected having been residents of the nation.

WHERE DID IT BEGIN?

An analysis, published in the New England Journal of Medicine, found the outbreak began in Guinea – which neighbours Liberia and Sierra Leone.

A team of international researchers were able to trace the epidemic back to a two-year-old boy in Meliandou – about 400 miles (650km) from the capital, Conakry.

Emile Ouamouno, known more commonly as Patient Zero, may have contracted the deadly virus by playing with bats in a hollow tree, a study suggested.

HOW MANY PEOPLE WERE STRUCK DOWN?

Figures show nearly 29,000 people were infected from Ebola – meaning the virus killed around 40 per cent of those it struck.

Cases and deaths were also reported in Nigeria, Mali and the US – but on a much smaller scale, with 15 fatalities between the three nations.

Health officials in Guinea reported a mysterious bug in the south-eastern regions of the country before the WHO confirmed it was Ebola.

Ebola was first identified by scientists in 1976, but the most recent outbreak dwarfed all other ones recorded in history, figures show.

HOW DID HUMANS CONTRACT THE VIRUS?

Scientists believe Ebola is most often passed to humans by fruit bats, but antelope, porcupines, gorillas and chimpanzees could also be to blame.

It can be transmitted between humans through blood, secretions and other bodily fluids of people – and surfaces – that have been infected.

IS THERE A TREATMENT?

The WHO warns that there is ‘no proven treatment’ for Ebola – but dozens of drugs and jabs are being tested in case of a similarly devastating outbreak.

Hope exists though, after an experimental vaccine, called rVSV-ZEBOV, protected nearly 6,000 people. The results were published in The Lancet journal.