The NHS drug regulator has been branded ‘inflexible’ when it comes to approving medicines for rare diseases in a report calling for it to be reformed.

The National Institute for Health and Care Excellence (NICE) gives guidance on how to improve health care, including advising on how cost-effective treatments are.

But MAP BioPharma, a company which provides insights into the pharmaceutical market, claims the watchdog works unfairly towards patients with rare diseases.

It found that 13 per cent of rare disease medicines make it through assessments, compared to 68 per cent of medicines for common diseases.

An estimated 3.5million people are affected by 7,000 rare diseases in the UK, but it is believed that 95 per cent of rare diseases have no approved treatments available. 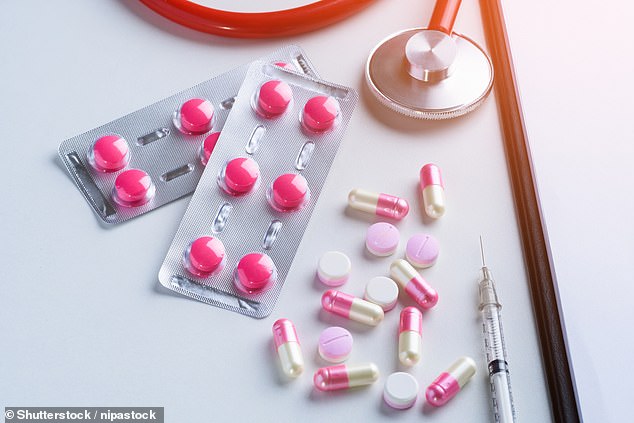 MAP BioPharma, which aims to accelerate patient access to medicine, looked into one of NICE’s two appraisal routes, a Single Technology Appraisal (STA).

This is the default route for orphan medicines, which are medicines which aren’t profitable without a government susbsidy.

According to the report, named Access to Orphan Medicines: A Case for Change, of the 24 completed STA reviews of rare medicines between 2013 and 2017, only six (13 per cent) were recommended.

This is in comparison to over two-thirds (68 per cent) of non-orphan medicines for more common diseases.

In the same period, 50 per cent of rare disease medicines were given a ‘restricted recommendation’, compared to 21 per cent of other medicines.

When drugs have been made available, the process has been complex and led to patients and their families facing delays and uncertainty, the report said. 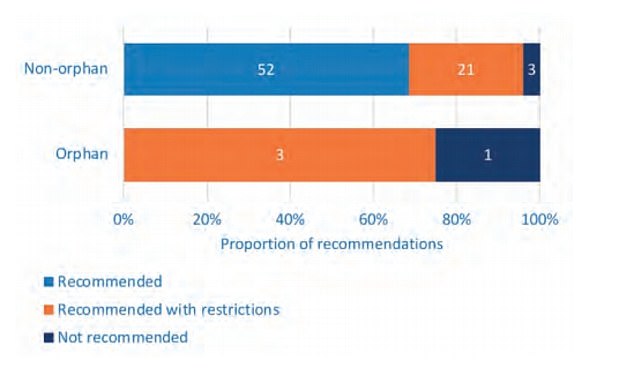 The report claimed NICE’s criteria fail to take into account the effects on patients and their families, and potential impacts outside of healthcare costs.

WHAT ARE ORPHAN DRUGS?

An orphan drug is a medicinal product developed for the treatment of a rare disease.

In Europe, a rare disease is defined as a condition that affects less than 5 per 10, 000 inhabitants, and is fatal or severely debilitating.

There are over 7,000 known rare diseases, which means that several million people are affected all over the world – over 25million in Europe alone.

Today, treatment exists for only 200–300 diseases.

Physicians may never see a patient with a rare disease.

For that reason there’s always a risk that when a baby is born with a rare disease, a correct diagnosis may not be made and appropriate treatment may not be given.

In addition, patient numbers are so small that a rare disease is often not ‘adopted’ by the pharmaceutical industry (hence the expression orphan drug).

To provide care for people with a rare disease and to encourage pharmaceutical and biotechnology companies to invest in treatment for rare diseases, governments have created various legal and financial incentives including the Orphan Drug Act in the US in 1993 and in 1999 legislation was approved by the European Parliament.

This legislation grants, among other things, a ten-year market exclusivity for any new orphan drug.

The process from the discovery of a new molecule to its marketing is long, ten years on average, expensive and very uncertain, OrphaNet reveals.

Following the findings, MAP made ‘flexibility’ recommendations to NICE, the NHS and the Government, claiming the current system does not deliver equal access for patients.

These included reconsidering what it said was cost-effective and allowing for more negotiation opportunities between companies and NHS England.

The report said: ‘A transparent, fair process is most likely to deliver equality for patents.

‘These adaptations will help to level the playing field so that patents, clinicians and companies can be sure that all treatments for rare diseases will be considered under a fair appraisal.’

Christian Hill, MAP BioPharma CEO said: ‘MAP’s research illustrates that the current processes are not fit for purpose and we urge NICE, NHS England and the Government to look into how they can improve patient access to rare disease medicines.’

Commenting on the report, Dr Jayne Spink, chief executive at Genetic Alliance UK said: ‘This report helps to show the systemic failings in our decision-making systems for access to rare disease treatments.

‘This system will continue to fail people living with rare diseases until the fundamental challenges of assessing rare disease treatments are better addressed.

‘We at Genetic Alliance UK, our 220 patient organisation members, and our community look forward to ensuring patient voice plays a crucial role in making positive changes.’

One of the rare disease drugs the report challenged was Orkambi, a cystic fibrosis drug that is unavailable in the UK.

Orkambi received its European license in November 2015. But despite NICE recognising Orkambi as an important treatment, it was unsuccessful in NICE’s STA review in 2016.

NICE rejected its use based on cost factors and the lack of long-term data on Orkambi’s effectiveness, but charities argue that the drug targets the F508del gene mutation, which affects about 50 per cent of all people with cystic fibrosis.

MAP said: ‘NICE’s decision to not recommend lumacaforivacafor therapy (Orkambi) for routine use in the NHS in England has been highly contested by patents and their representatives, concluding in a high-profile public debate about access to orphan medicines for rare diseases.

‘Sixty MPs participated in March and 22 MPs contributed to the latest debate, sharing stories of people living with cystic fibrosis and the need for new treatments like Orkambi to be made available.’