Researchers found the extract hampered the DNA of the cancer cells, inhibiting the growth and progression of tumours.

Green tea showed similar promise, the scientists said. However, black and dark tea had little effect on the cells. 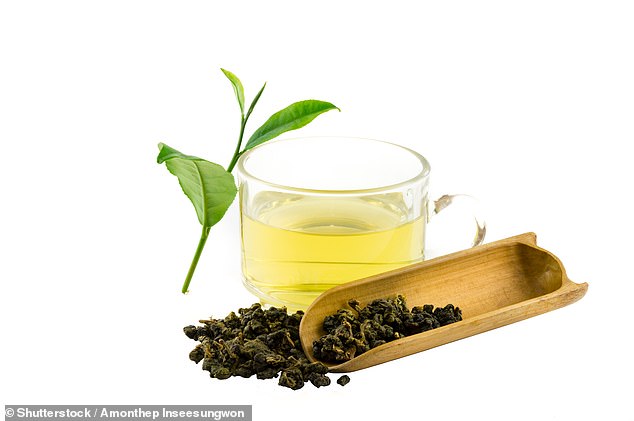 Scientists at St Louis University, Missouri, also analysed the rates of breast cancer and deaths from the disease across China.

Their analysis found regions with high oolong tea consumption had generally lower rates of the disease.

The team now say the tea offers promise as a non-toxic approach to prevent breast cancer, which one in eight women will develop in their lifetime.

Cancer cells lines are used in research, and are cancer cells that keep dividing and growing over time under certain conditions in a laboratory.

Whereas cells treated with black and dark tea extracts showed no or very weak effect.

The team said: ‘From our results, oolong tea, much like green tea, plays a role in inhibiting breast cancer cell growth, proliferation and tumor progression.

WHAT IS OOLONG TEA?

You may not be familiar with oolong tea, which originates from China.

Any tea that has been oxidized between eight and 85 per cent (semi oxidised) can be considered an oolong tea.

Tea oxidation is one of many steps in the production of oolong tea.

As soon as you pluck a tea leaf, it starts to oxidize.

Black teas are fully oxidized whereas green teas are hardly oxidised at all.

These properties all have potential for health benefits including weight loss, brain function, heart health and diabetes prevention. But their efficacy in tea needs more research.

‘Oolong tea, same as green tea, can induce DNA damage and cleavage, play an inhibitory role in breast cancer cell growth, proliferation, and tumorigenesis, and [it has] great potential as a chemopreventive agent against breast cancer.’

Green tea has shown anti-cancer benefits in studies before, but oolong tea has been researched less.

Just two per cent of the world’s tea production is oolong tea, compared to about 78 per cent black tea, and 20 per cent green tea, the authors said.

It is mostly produced in China, where people have been using it for its supposed medicinal purposes for a historic period of time.

They found that the incidence of breast cancer in the Fujian province was 35 per cent lower than the national average.

Those who drank the most oolong tea had a 25 per cent lower incidence compared to the average Fujian, and 50 per cent lower than the national average.

They also appeared to have a lower mortality rate –  the death rate of high consumers  of oolong tea in Fijian was 68 per cent lower than the national average, according to the findings published in the journal Anticancer Research.

Although the results are significant, more research is required, the authors said.

‘It is clear that more study is needed,’ Dr Huang said. ‘The lower incidence and mortality in regions with higher oolong tea consumption indicate that oolong tea has great potential for its anti-cancer properties.’

Although survival rates have been improving – doubling in the past 40 years in the UK – the treatment is gruelling.

A Breast Cancer Care survey found that women 26 per cent of women found the end of treatment the hardest part of breast cancer.

Ongoing side effects of treatment such as chemotherapy and radiotherapy can make people feel like they are not moving forward after treatment.

Prevention and early diagnosis is key to improving future health prospects, with screening being offered to all women between the age of 50 and 70 in the UK.