Ebola patients have escaped from a treatment centre at the heart of an outbreak in Democratic Republic of the Congo.

Two dozen potentially contagious people broke out of a medical centre in Beni, in the north-east of the African country, when it was attacked yesterday.

Seven of the 24 have been tracked down but the search is on for the remaining 17 who, if infected, could spread the virus if back out in public.

At least 336 people have died in the ongoing outbreak, which began in August and has infected more than 500 people.

Violence has been making it difficult to stop Ebola spreading and things worsened when a general election was postponed this month. 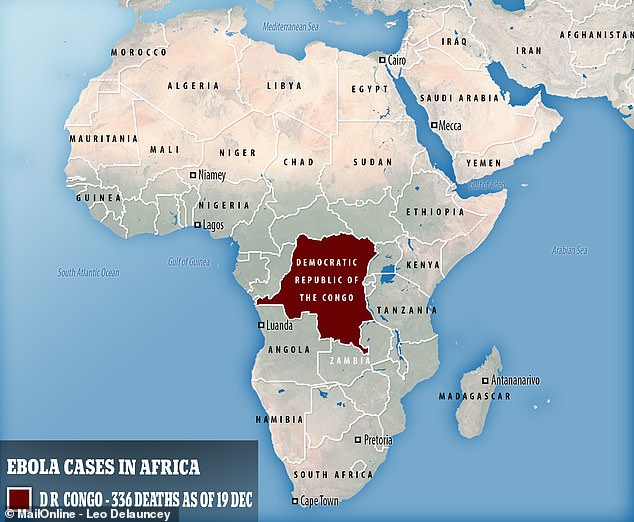 At least 336 people are now believed to have died since August in an Ebola outbreak in the Democratic Republic of the Congo, with more than 500 people catching the disease so far 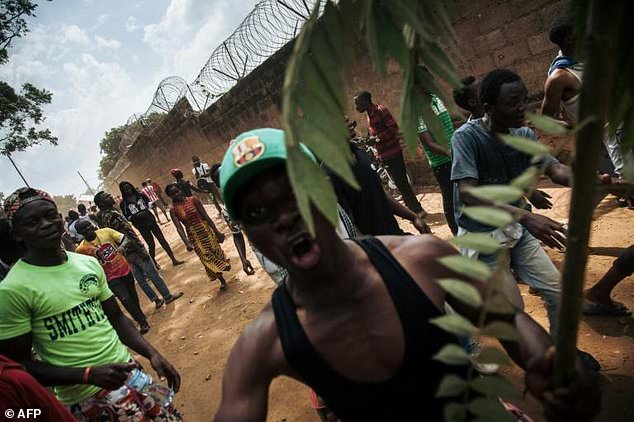 People protesting election delays (pictured) attacked a Doctors Without Borders camp where medics are working to control an Ebola outbreak, and 24 patients believed to have the disease escaped during the violence 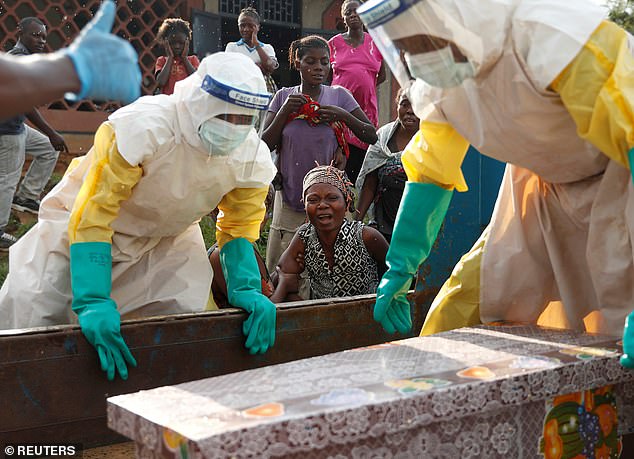 Photos released by Reuters have shown families grieving at the funerals of children, in Beni in the North Kivu province, who died of suspected Ebola

The patients who escaped were being held in a camp with suspected Ebola but hadn’t yet been confirmed.

Demonstrators attacked the camp after elections planned for Sunday, December 23, were postponed because of fears of violence and the Ebola outbreak.

‘Of 24 patients, 17 had tested negative (for Ebola) once. They had to be tested a second time before being discharged,’ said a spokeswoman for DRC’s health ministry.

‘Four of them went home. Three other suspected cases were in too serious a case to flee.’

But some of the demonstrators went into contaminated zones of the camp, according to one aid worker, adding more potential for the spread of the virus.

As well as fears Ebola will spread into other regions of DRC, the neighbouring countries of Uganda and South Sudan are on high alert.

Health workers in those countries have been given vaccines against the virus to try and prevent it spreading via people who travel across the borders.

Confirmed figures show 512 people have been struck down with Ebola, with a 288 confirmed to have died of it – the remaining cases are still being tested.

Experts warn the infection is spreading because people are moving in and out of the region, while some communities are not engaging with health workers.

The provinces of North Kivu, which includes the heavily populated cities of Beni, Kalunguta and Mabalako, and Ituri remain the centre of the outbreak.

Aid workers face the threat of attack from armed groups and resistance from locals in a region which has never had an Ebola outbreak before.

Armed rebels have attacked, kidnapped and killed medical staff trying to combat the outbreak and equipment has been destroyed, making it difficult to help victims. 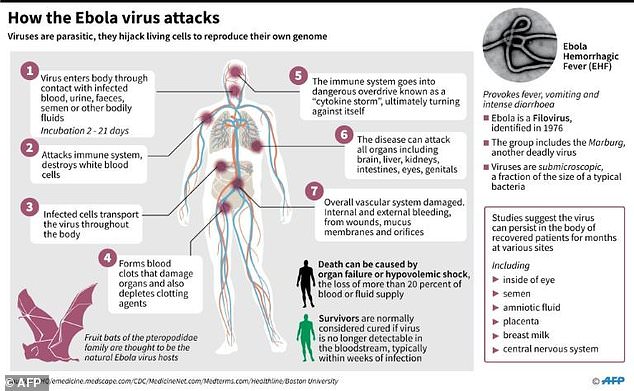 Ebola damages the body by attacking white blood cells and reducing the blood’s ability to clot, which then sends the immune system into overdrive, making it target the organs and cause serious, potentially fatal damage 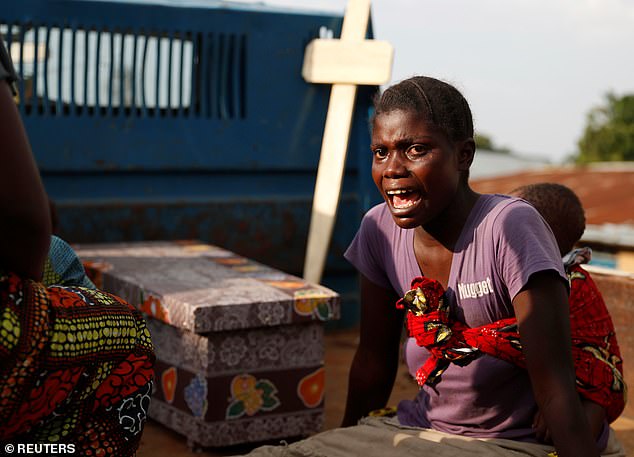 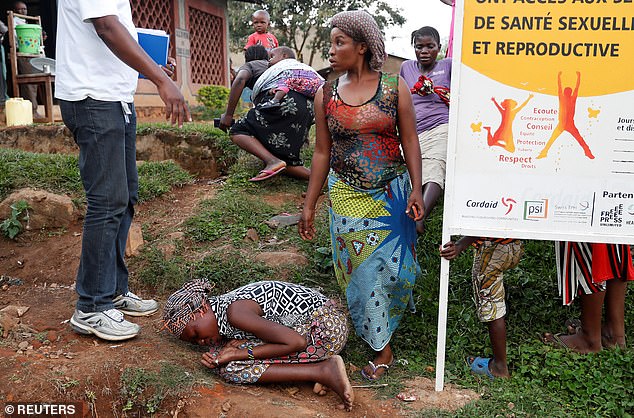 UNICEF said more than 400 children have been left orphaned or unaccompanied in this outbreak, as patients can spend weeks in treatment centres

Ebola can be transmitted between humans through blood and other bodily fluids of people who have been infected, and by touching infected surfaces.

The elections scheduled for earlier this month would have used touch screens and hand sanitiser was sent to polling stations to try and avoid the virus spreading that way.

Voting has been suspended until March in Beni and the nearby city of Butembo, but the rest of the country is expected to go to the polls this weekend.

In a world-first, four experimental drugs are being used to try and combat the disease – mAb 114, ZMapp, Remdesivir and Regeneron.

Patients will each be treated with one of the four and scientific researchers will conduct a study on how well each of them works.

Dr Jeremy Farrar, director of Wellcome, a UK charity which has funded research into the vaccine being used in the DRC, told MailOnline last week: ‘The Ebola vaccine and now also potential treatments available as part of clinical trials are having a huge impact.

‘But, we are in a crucial phase and it is an incredibly challenging and frightening environment for health workers. The next month, over Christmas and New Year, will be critical to what happens to this outbreak.’

A worrying development happened earlier in December when the virus appeared to have taken hold in another major city, Butembo, 35 miles (56km) away from Beni.

Experts warned the quick spread makes tackling the virus more complicated because containing it has been challenging enough in the one city.

They fear experimental vaccines which have been doled out to thousands of people will run out.

Dr Farrar added: ‘This Ebola outbreak is taking hold in an incredibly complex region and extends into dangerous conflict areas.

‘The number of cases and deaths is concerning but the DRC public health teams, WHO and other international partners continue to provide an incredible response.’

WHAT IS EBOLA AND HOW DEADLY IS IT?

Ebola, a haemorrhagic fever, killed at least 11,000 across the world after it decimated West Africa and spread rapidly over the space of two years.

That epidemic was officially declared over back in January 2016, when Liberia was announced to be Ebola-free by the WHO.

The country, rocked by back-to-back civil wars that ended in 2003, was hit the hardest by the fever, with 40 per cent of the deaths having occurred there.

Sierra Leone reported the highest number of Ebola cases, with nearly of all those infected having been residents of the nation.

WHERE DID IT BEGIN?

An analysis, published in the New England Journal of Medicine, found the outbreak began in Guinea – which neighbours Liberia and Sierra Leone.

A team of international researchers were able to trace the epidemic back to a two-year-old boy in Meliandou – about 400 miles (650km) from the capital, Conakry.

Emile Ouamouno, known more commonly as Patient Zero, may have contracted the deadly virus by playing with bats in a hollow tree, a study suggested.

HOW MANY PEOPLE WERE STRUCK DOWN?

Figures show nearly 29,000 people were infected from Ebola – meaning the virus killed around 40 per cent of those it struck.

Cases and deaths were also reported in Nigeria, Mali and the US – but on a much smaller scale, with 15 fatalities between the three nations.

Health officials in Guinea reported a mysterious bug in the south-eastern regions of the country before the WHO confirmed it was Ebola.

Ebola was first identified by scientists in 1976, but the most recent outbreak dwarfed all other ones recorded in history, figures show.

HOW DID HUMANS CONTRACT THE VIRUS?

Scientists believe Ebola is most often passed to humans by fruit bats, but antelope, porcupines, gorillas and chimpanzees could also be to blame.

It can be transmitted between humans through blood, secretions and other bodily fluids of people – and surfaces – that have been infected.

IS THERE A TREATMENT?

The WHO warns that there is ‘no proven treatment’ for Ebola – but dozens of drugs and jabs are being tested in case of a similarly devastating outbreak.

Hope exists though, after an experimental vaccine, called rVSV-ZEBOV, protected nearly 6,000 people. The results were published in The Lancet journal.