NHS goes to war on cigarettes and alcohol: Doctors put on alert to spot problem drinkers while smokers who go to hospital will be offered counselling

Hospital staff will be urged to look out for patients who drink heavily or smoke in an NHS drive to prevent ill health.

Doctors and nurses are to be on alert for suspected ‘problem drinkers’ among casualty cases or those in wards or clinics.

Patients could be referred to specialist ‘alcohol care teams’ if health workers think they may have an issue with booze.

Smokers who end up in hospital will be encouraged to quit with the offer of prescription drugs or counselling.

Alcohol and tobacco addiction are two of the biggest causes of early death and NHS chiefs believe they can boost the health of the nation by encouraging Britons to make better lifestyle choices.

The proposals are part of the NHS’s Long Term Plan which will be unveiled in full on Monday. The blueprint will set out the priorities for the health service over the next ten years and is a key part of Theresa May’s domestic policy agenda. Other measures will include:

A focus on preventing Type 2 diabetes with patients to be put on liquid diets to reverse the condition.

Improvements to the safety and care of maternity services to make the NHS the ‘best place in the world to give birth’. 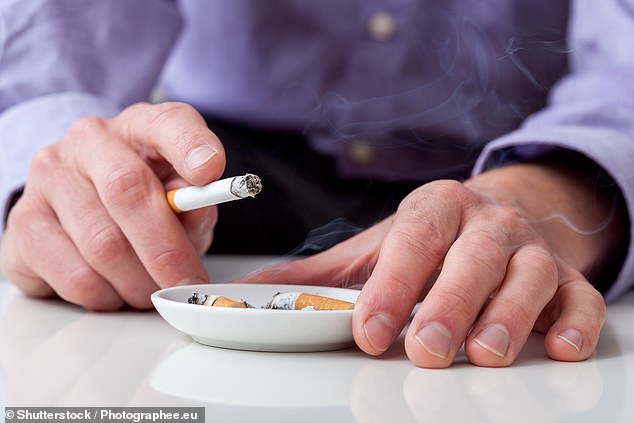 A pledge to double volunteers to up to 156,000 over the next three years.

Promises to boost mental health care for under-18s for conditions such as eating disorders, self-harm and depression.

The plan – which runs to more than 100 pages – has been drawn up by NHS England and was meant to have been published in mid-December.

It was postponed by No.10 as Theresa May was preoccupied with Brexit and the subsequent no-confidence vote by MPs. It was drawn up at her request in July after she promised the NHS an extra £20.5billion a year for its 70th anniversary.

Unveiling it next week, Mrs May hopes to get the new year off to a positive start before the Brexit debate resumes in the Commons on Wednesday. A cornerstone of the plan is preventing ill health in the first place by encouraging patients to take control of their habits.

Hospital staff will be instructed to help all patients who smoke to quit, including pregnant women attending antenatal appointments as well as fathers-to-be. They will be helped to kick the habit with medication, nicotine patches or gum as well as counselling.

Staff should also be alert to the warning signs of problem drinking, including high blood pressure, a history of falls or blackouts and early symptoms of liver disease. The NHS does not define a ‘problem drinker’ but adults are advised to consume no more than 14 units of alcohol a week, equivalent to seven glasses of wine or seven pints of beer.

But research has consistently shown that the middle aged and the middle classes are most likely to drink heavily. Patients suspected of being problem drinkers will be assessed through a questionnaire and then referred to an alcohol care team, run by nurses.

Simon Stevens, chief executive of NHS England, said: ‘Drinking to excess can destroy families, with the NHS too often left to pick up the pieces.

‘Alcohol and tobacco addiction remain two of the biggest causes of ill health and early death, and the right support can save lives.’

Initially, alcohol care teams will be deployed in 50 hospitals with the highest number of booze-related admissions.

As well as support they can prescribe pills of the drug naltrexone which makes patients violently sick if they drink. NHS England estimates the scheme could prevent 50,000 admissions and 250,000 nights on wards over the next five years alone.

Duncan Selbie, chief executive of Public Health England – the government agency for preventing ill health – said the measures will save thousands of lives and help the NHS ‘remain sustainable into future years’.

But Jonathan Ashworth MP, Labour’s health spokesman, said: ‘These new proposals will be severely hindered by deep cuts of £34million to alcohol and drug addiction services and £3.1million cuts to community smoking cessation services ministers are imposing this financial year. These cuts follow years of public health cuts that have pushed many local services to the brink.

‘For Tory ministers’ promises on prevention to be credible, public health cuts should be reversed in the upcoming Long Term Plan.’

And Simon Clark of Forest, which campaigns against smoking controls, said: ‘It’s stressful enough being in hospital without the additional pressure of being hounded to stop smoking.

‘Pressuring smokers to quit, especially if they’re in hospital for a non-smoking-related reason, is an invasion of privacy and tantamount to bullying.’