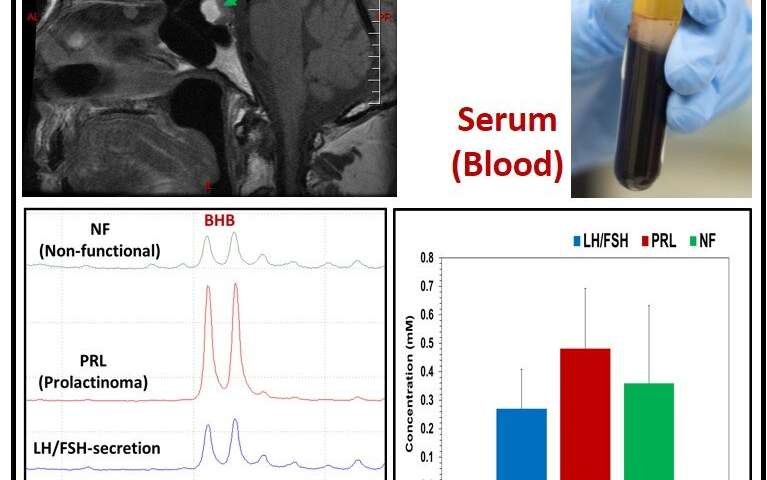 Houston Methodist neurosurgeons and neuroscientists are looking at a new way to classify pituitary tumors that could lead to more precise and accurate diagnosing for patients in the future.

Found in up to 10% of the population, pituitary tumors, also called adenomas, are noncancerous growths on the pituitary gland and very common. Although these pituitary tumors are benign in nature, they pose a major health challenge in patients.

The new tests being investigated at Houston Methodist not only have the potential to lead to better diagnoses for patients with pituitary adenomas, but also for many other types of brain tumors in the future. The findings, which were published Jan. 28 in Scientific Reports, an online journal from Nature Publishing Group, describe a new way being looked at to study the blood of patients with pituitary tumors to determine exactly what tumor type they have and whether they might respond to medical treatment rather than surgery.

“Often called the ‘master gland,’ the pituitary gland controls the entire endocrine system and regulates various body functions by secreting hormones into the bloodstream to control such things as metabolism, growth and development, reproduction and sleep,” said corresponding author Kumar Pichumani, Ph.D., a research physicist at the Houston Methodist Research Institute. “When pituitary adenomas occur, they may secrete too much of one or more hormones that could lead to a variety of issues, ranging from infertility and sexual dysfunction to vision problems and osteoporosis, among many other health problems.”

Neurosurgeon David S. Baskin, M.D., director of the Kenneth R. Peak Center for Brain and Pituitary Tumor Treatment and Research in the Department of Neurosurgery at Houston Methodist Hospital, collaborated with Pichumani on this study. He said some pituitary tumors can be treated with medication rather than surgery, but a precise diagnosis of the type of tumor someone has and what hormone it’s secreting is essential for proper treatment. This is sometimes very difficult to do based on standard endocrine hormone testing.

“To guide our decisions on diagnosis and treatment, we currently rely on a blood-based hormone panel test that measures the levels of hormones in the blood to determine which hormones are overproducing in the tumor,” Baskin said. “However, some tumors secrete too much of more than one hormone, making this test ambiguous for diagnosis.”

Led by Pichumani and Baskin, a team of researchers from the Peak Brain and Pituitary Tumor Treatment and Research Center and Houston Methodist Neurological Institute studied 47 pituitary adenoma patients of different subtypes by collecting blood during surgery to remove their tumors. They confirmed that elevated blood levels of a non-hormonal compound called betahydroxybutyrate, also known as BHB, was found only in patients with the prolactinoma subtype of noncancerous pituitary gland brain tumor that overproduces the hormone prolactin. This compound is known to supply energy to the brain during starvation, which led the researchers to speculate that BHB might be providing non-hormonal energy to these prolactinoma tumors causing them to grow and spread. The discovery could be further developed into a diagnostic lab test.

This study is part of a developing field called metabolomics in which researchers study small molecules in tumors to see what’s unique about their metabolism and how they’re used as nutrients to supply energy. This contributes to better diagnoses and discovering new ways to kill tumors by poisoning the specific energy they use without causing damage to normal cells.