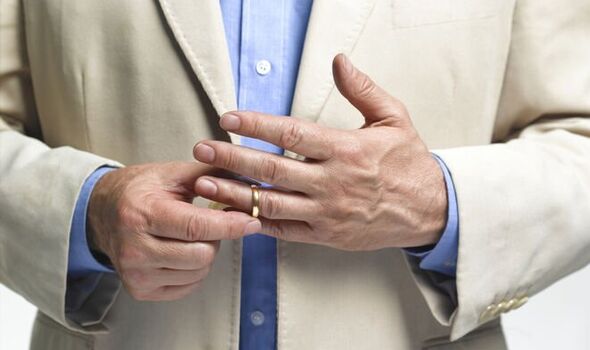 In January 2020, two months before the country went into lockdown, Niraj moved out of the family home in the English countryside and into a small rented flat.

“I went from a busy household to living alone,” he says. “That was a really difficult time.”

“For four months I saw nobody. I started using food as a comfort – constantly eating as a way of coping with loneliness.”

“Eventually my doctor diagnosed me as obese, and shortly afterwards I got osteoarthritis in my right knee. I was experiencing sleeping problems, back problems and migraines.”

And Niraj is by no means alone.

And comedian Rob Brydon, 56, opened up earlier this year about his divorce from first wife Martina, which left him so traumatised he refused to talk about it for 16 years.

For Niraj, divorce took a toll on his friendships.

“I was shocked at how many took her side. I think the fact I initiated it made me the ‘bad guy’. Being Indian added an extra element, as it’s not widely accepted in our culture.”

New research funded by men’s health charity Movember has shown that men whose relationships break down are at high risk for mental illness, including anxiety, depression and suicidal thinking.

A study carried out by the University of British Columbia has shown that marital separation quadruples the risk of male suicide.

“Stereotypical masculinity plays a role in how men react to a broken relationship,” says Dr John Oliffe, a research chairman for men’s health at the Canadian university. “Uncertainty as to how to articulate and problem solve results in many men isolating rather than reaching out for help.”

In 2020, there were 103,592 divorces granted in England and Wales. Currently, couples can only be granted a divorce if one of five established factors can be named as the cause of the marriage’s irreversible breakdown – they are unreasonable behaviour, adultery, five years of separation without consent, two years of separation with consent, or desertion.

However, experts have predicted that the new no-fault divorce bill, which becomes law on April 6 in England and Wales, will see a rise in the number of divorce petitions.

The new legislation states that either party in a marriage can request a divorce without having to cite blame.

“A significant part of what is expected of men relates to being publicly, outwardly successful and separation and divorce can challenge this image,” says Dr Steve Robertson, emeritus professor of Men, Gender and Health at Leeds Beckett University. “It can suggest failure, that you are not ‘good enough’ ( financially, sexually or emotionally) to hold on to your partner.”

“It erodes confidence when men are meant to exude confidence.”

When Niraj hit rock bottom, his family stepped in to help. “My parents called and said, ‘It’s time to come home’,” he says.

“I put all my belongings in storage and went back to living under their roof. At first, I felt ashamed and embarrassed, but gradually things started to improve. I had company again – I got to spend time with my sister and nephews who lived down the road. I enjoyed home-cooked meals from my mum.

“Sometimes during the hardest of times in life we just need a hug from our mum.”

Two years on, Niraj has met a new partner and is enjoying life again.

“I’m in a good place now, but it didn’t happen overnight,” he says.

“For other men who are going through a marriage breakdown now or just a hard time in general, I want them to know there’s light at the end of the tunnel. Don’t be afraid to be vulnerable – there’s so much strength in vulnerability, and you’ll be surprised at the connections you make when you are.”

Allow yourself time to grieve

Feeling sad, angry, hurt, betrayed, desperate and lost is very common and perfectly normal. Remember these feelings won’t last forever, even though it feels like they will.

Don’t jump into a new relationship

Avoid launching into new intimate relationships. Dating when your mind is not in the right place can further damage your confidence.

Catch up regularly and re-establish relationships that may have drifted over the years. Having strong social connections has a major influence on long-term health and wellbeing.

Engage in positive activities or hobbies, preferably those that involve other people. This is a useful way of distracting yourself from negative thoughts while enjoying the company of others.

Focus on your kids’ needs

You may be grieving the loss of time with your children and concerned about the impact the split will have on them. Focus on their needs, including their need for space or distance, even if that might hurt you. Visit familyman.movember.com.

Reflect on your relationship

When the time feels appropriate, think about what you might have learnt from this time and how you might use this positively. But don’t dwell on what you or your partner might have done wrong.

Seek help if you need it

We all have times when our mood is low but if the feelings don’t pass and start to interfere with your life, it could be a sign that it’s time to call in an expert. You may want to begin with telephone helplines provided by groups such as Mind or Samaritans.