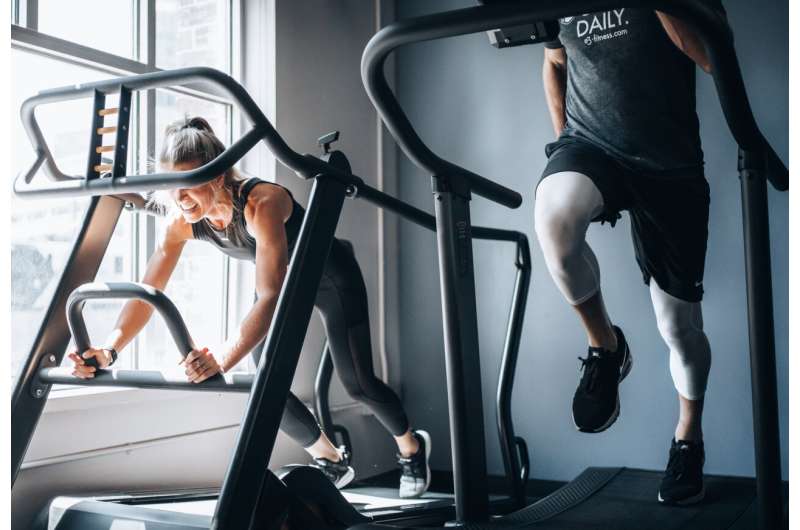 A recent paper published in the Journal of Physiology deepened the case for the youthfulness-promoting effects of exercise on aging organisms, building on previous work done with lab mice nearing the end of their natural lifespan that had access to a weighted exercise wheel.

The densely detailed paper, “A molecular signature defining exercise adaptation with aging and in vivo partial reprogramming in skeletal muscle,” lists a whopping 16 co-authors, six of whom are affiliated with the U of A. The corresponding author is Kevin Murach, an assistant professor in the U of A’s Department of Health, Human Performance and Recreation, and the first author is Ronald G. Jones III, a Ph.D. student in Murach’s Molecular Muscle Mass Regulation Laboratory.

For this paper, the researchers compared aging mice that had access to a weighted exercise wheel with mice that had undergone epigenetic reprogramming via the expression of Yamanaka factors.

The Yamanaka factors are four protein transcription factors (identified as Oct3/4, Sox2, Klf4 and c-Myc, often abbreviated to OKSM) that can revert highly specified cells (such as a skin cell) back to a stem cell, which is a younger and more adaptable state. The Nobel Prize in Physiology or Medicine was awarded to Dr. Shinya Yamanaka for this discovery in 2012. In the correct dosages, inducing the Yamanaka factors throughout the body in rodents can ameliorate the hallmarks of aging by mimicking the adaptability that is common to more youthful cells.

Of the four factors, Myc is induced by exercising skeletal muscle. Myc may serve as a naturally induced reprogramming stimulus in muscle, making it a useful point of comparison between cells that have been reprogrammed via over expression of the Yamanaka factors and cells that have been reprogrammed through exercise—”reprogramming” in the latter case reflecting how an environmental stimulus can alter the accessibility and expression of genes.

Ultimately, the team determined that exercise promotes a molecular profile consistent with epigenetic partial programming. That is to say, exercise can mimic aspects of the molecular profile of muscles that have been exposed to Yamanaka factors (thus displaying molecular characteristics of more youthful cells). This beneficial effect of exercise may in part be attributed to the specific actions of Myc in muscle.

While it would be easy to hypothesize that someday we might be able to manipulate Myc in muscle to achieve the effects of exercise, thus sparing us the actual hard work, Murach cautions that would be the wrong conclusion to draw.

First, Myc would never be able to replicate all the downstream effects exercise has throughout the body. It is also the cause of tumors and cancers, so there are inherent dangers to manipulating its expression. Instead, Murach thinks manipulating Myc might best be employed as an experimental strategy to understand how to restore exercise adaptation to old muscles showing declining responsiveness.

Possibly it could also be a means of supercharging the exercise response of astronauts in zero gravity or people confined to bed rest who only have a limited capacity for exercise. Myc has many effects, both good and bad, so defining the beneficial ones could lead to a safe therapeutic that could be effective for humans down the road.

Murach sees their research as further validation of exercise as a polypill. “Exercise is the most powerful drug we have,” he says, and should be considered a health-enhancing—and potentially life-extending—treatment along with medications and a healthy diet.