Why is just 1% of research funding spent on the cancer that kills more children than any other? Mother hits out over lack of cash for brain tumour research

Among the proud moments captured on Nicola Wharton’s phone, is a short video of her son Aaron, then aged four, out on a stroll with his father Lee.

What the footage from 2020 showed brought the family’s world crashing down.

‘Playing it back, Lee noticed Aaron was walking with a lopsided walk — a lurching gait,’ says Nicola, 37, a business analyst from Buckley, Flintshire. ‘It wasn’t like Aaron, it was as if someone else had taken over his walking.’

Weeks earlier, Aaron‘s face had begun drooping slightly, but when Nicola and Lee took him to the local hospital they were told it was Bell’s palsy, a weakness on one side of the face caused by an infection. Their son had also been vomiting.

‘But it was his abnormal gait that day in April that made us realise there was something really wrong,’ says Nicola.

Lee, 51, and Nicola took Aaron to A&E at the Countess of Chester Hospital in Chester where, to their horror, an MRI showed there was a tumour in Aaron’s brain.

They were told to take him straight to Alder Hey Hospital in Liverpool, where scans found he had a 4.5cm by 4cm tumour resting on his cranial nerve — which connects your brain to different parts of your head, neck and trunk — at the base of his brain. 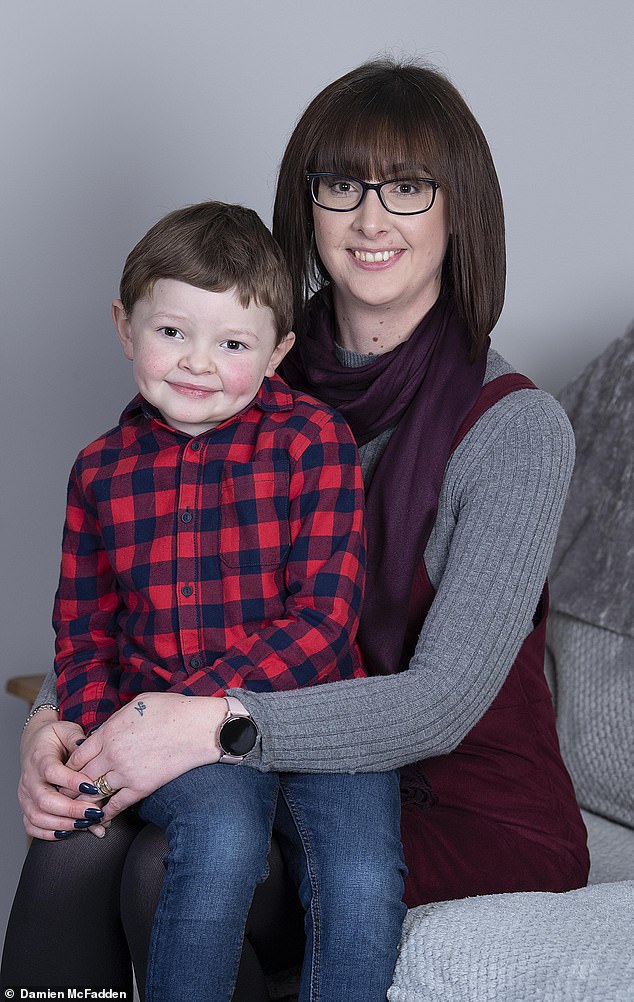 Lee, 51, and Nicola took Aaron to A&E at the Countess of Chester Hospital in Chester where, to their horror, an MRI showed there was a tumour in Aaron’s brain

‘Two days later, he had ten hours of surgery to remove it,’ says Nicola. ‘When the surgeon walked out at 6pm and said he’d removed it, I burst into tears and hugged him.’

The joy was short-lived, though, as the following week biopsy results revealed Aaron had a Grade 3 anaplastic ependymoma — a rare and aggressive tumour normally diagnosed in children around the age of five.

The Whartons knew then they had a huge fight on their hands.

Brain tumours are the biggest cancer killers in children. For one form, diffuse intrinsic pontine glioma — the leading cause of brain tumour deaths in youngsters — the prognosis is eight to 12 months. The average five-year survival rate for children is 74 per cent, but this varies, according to tumour type.

Youngsters can usually only have radiotherapy — chemotherapy is rarely given, because it is often ineffective as few drugs can cross the protective blood-brain barrier. It also carries the risk of side-effects such as depleted bone marrow and cranial damage.

After surgery, Aaron had six-and-a-half weeks — 33 sessions — of proton beam radiotherapy, which aims targeted beams of protons at the tumour, and damages fewer of the healthy cells around it.

He was treated at the Christie Hospital in Manchester — one of only two centres in the UK where the relatively new therapy is carried out. It was introduced, mainly for children, just five years ago.

The family hoped Aaron might also be accepted onto a clinical trial to see if chemotherapy combined with radiotherapy would help at that stage.

‘Potential patients were randomised by a computer and he came out as a “no”,’ says Nicola.

‘I was so angry that it was a computer, and not a person that made that decision.

‘I’d seen Aaron go through so much and he has his whole life ahead of him, yet there’s not enough research or evidence to say if chemotherapy would have boosted his chance of a cure.’

Too many families find themselves asking, like the Whartons, if more could be done for their children. For, while breakthroughs with other cancers and other diseases come thick and fast, the outlook for those with brain tumours has remained unchanged for years.

This is partly because there is so little funding for research.

Data released last year by the National Cancer Research Institute shows that research into the condition represents just 1 per cent of the national spend on cancer from the Government, charities, the NCRI and its partners.

The disparity is partly to do with the numbers affected, but that’s not the only reason, says Garth Cruickshank, an emeritus professor of neurosurgery at Birmingham University and chair of the scientific and medical advisory board of the charity, Brain Tumour Research. 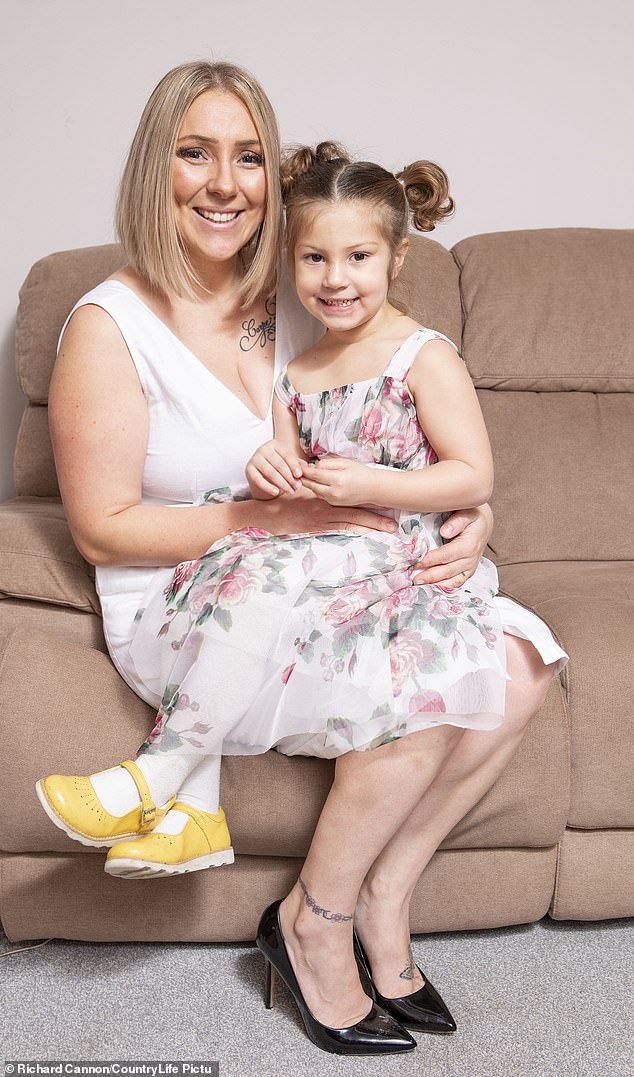 Someone who understands the agony is Wendy Lambert, mother of Esme, five, who was diagnosed in October 2018 aged one with a ependymoma. The tumour, which starts in the cells lining the fluid-filled ventricles of the brain and spinal cord, affects about 30 children in the UK each year

‘The number of people with malignant brain tumours each year is relatively small — probably 4,000 to 5,000, with around 450 of these children. By comparison to breast or lung cancers, it’s rare.

‘However, it also carries with it shattering repercussions beyond the diagnosis of other types of cancer because it affects not just your body, but the mind, and drug companies steer away from trying these drugs out on the brain as they think — probably correctly — that many of them will fail.

‘They want to trial drugs that have a higher chance of working — and the small number of patients and the human impact of brain cancer frightens them off.’

Hugh Adams, a Brain Tumour Research spokesman, says that with some tumour types, setting up a clinical trial takes longer than the average prognosis of a child who has been diagnosed with such a brain tumour.

‘The logistics aren’t in tune with the need — and brain tumour patients and their families do not have the luxury of time,’ he says.

Hold-ups appear to happen all along the line.

In 2016, following an e-petition attracting 120,000 signatures after the death of Dame Tessa Jowell, former secretary of state for media and sport, the Government made £40 million available over five years for research into brain tumours.

‘But by 2021, less than 25 per cent of this money had been allocated to brain tumour researchers,’ says Hugh Adams. ‘The National Institute of Health Research is saying scientists need to put forward suggestions, but they’re not taking any risks or supporting early-stage science.

‘Less than 10 per cent of applications for research funding are being accepted. We must ensure there are brain tumour experts on the panels to judge applications — it’s a uniquely complex area.

‘Crucially, failed applicants must be given the tools, information and desire to reapply because if not, potentially talented and ambitious young minds may move away from brain tumour research towards better-funded areas.

‘I’ve been to intensely emotional meetings with parliamentarians on childhood brain tumours and I genuinely believe the will is there.

‘But unless funding bodies start thinking in a more innovative way, families will continue to be devastated.’

Someone who understands the agony is Wendy Lambert, mother of Esme, five, who was diagnosed in October 2018 aged one with a ependymoma. The tumour, which starts in the cells lining the fluid-filled ventricles of the brain and spinal cord, affects about 30 children in the UK each year.

‘The whole family had a sickness bug, but Esme carried on being sick for the following six weeks,’ says Wendy, 35, a counsellor. ‘She didn’t have a fever or a problem with balance, but when I took her swimming, out of nowhere, she bit me on the shoulder.’

Behavioural changes and balance problems are common symptoms of brain tumours. Others include persistent or recurrent headache and walking problems as well as recurrent vomiting.

It was Esme’s frequent vomiting that prompted Wendy to take her to their local hospital, Norfolk and Norwich University Hospital on October 28, 2018.

‘They put her on a drip, admitted her and carried out ultrasound and MRI scans,’ she says.

‘Three days later they told us Esme had a brain tumour and our world fell apart.

‘Aaron collapsed into his brother’s arms, and he’s such a strong alpha male, seeing him go completely weak shook me.

‘They told us we’d be blue-lighted to Addenbrooke’s Hospital in Cambridge, where Esme would need surgery to remove the pressure on her brain.

‘The tumour was growing in the cerebellum and pressing on the part of the brain responsible for balance and motor skills, causing Esme’s vomiting and dizziness.’

Esme’s tumour was removed in seven hours of surgery. ‘They told us it was an aggressive tumour,’ Wendy recalls. ‘The news sent us reeling. We were told that if Esme had been an adult, they would have recommended proton beam radiotherapy, but because she was so young, it would have major adverse effects on her brain and subsequent development.

‘Instead, we were looking at 56 treatment weeks of intense chemotherapy, and even then, there was a 60 per cent chance of the cancer coming back.’

‘It was devastating as parents to see her so sick, lying on the sofa, deathly white with no hair and so thin,’ says Wendy.

Esme’s chemotherapy ended in May 2020 after 19 months. ‘There was a point I didn’t think she’d make it to school,’ adds Wendy. ‘But now she’s at school and her hair is long enough to go into pigtails. When Aaron saw her hair like that for the first time, he cried.’

As well as children, brain tumours are the biggest cancer killer of adults under 40.

Amani Liaquat a law graduate from Luton, Bedfordshire, was six months into her masters degree when she collapsed with a seizure on April 29, 2020 — her 22nd birthday.

She was rushed to hospital, where a brain tumour was diagnosed. Days later a biopsy showed she had a Grade 4 glioblastoma multiforme with H3K27 mutation — a highly aggressive tumour. The tumour was inoperable, and doctors broke the news that she had, at most, 18 months left to live. Amani died, aged just 23, in February this year.

Professor Cruickshank says there’s hope on the horizon, pointing to work on temozolomide, a chemotherapy drug for brain tumours, and the Human Genome Project — which has made it possible to sequence the DNA of a tumour.

‘Through this we might be able to select a personalised therapy, looking at specific driver genes and hence uniquely target the patient’s treatment,’ he says.

Meanwhile, Aaron Wharton’s treatment continues. MRI scans in June 2021 revealed that a large tumour had regrown where his radiation treatment was given. ‘It was like the world had come crashing down again,’ says Nicola.

‘Aaron had started school in September 2020, and we had settled back into normal life when we were told just ten months after his treatment had finished that he had relapsed.

‘A new oncologist came to see us and said, bluntly, “Aaron will probably die”. Lee walked out of the room — and I felt as if I wasn’t physically there.’

Even following surgery to remove the returning tumour, Aaron’s chances of a cure were given as less than 5 per cent. After having radiotherapy, he started chemotherapy on December 31, 2021, and begins his third cycle today.

Aaron, now six, is unable to return to school because of infection risks.

Nicola says: ‘He sees other children walk past in their uniform, and he’s desperate to join them. We’re taking every day as it comes — and we’ve always said, if treatment is offered to us, we’ll take it.

‘Aaron is our only child and our entire world — and to see his lovely cheeky little grin is what keeps us going.’