Hundreds of thousands of vulnerable Britons could be asked to stop taking immune-suppressing drugs when they get a Covid booster vaccine this autumn.

Researchers have found pausing methotrexate treatment for a fortnight doubles the antibody response patients get from a top-up jab. And the benefits lasted for three months.

Many patients reliant on methotrexate were asked to shield during the first wave of the pandemic because the drug left them more prone to falling severely ill.

Nottingham University scientists described their results, from a study of 250 adults, as ‘remarkable’. 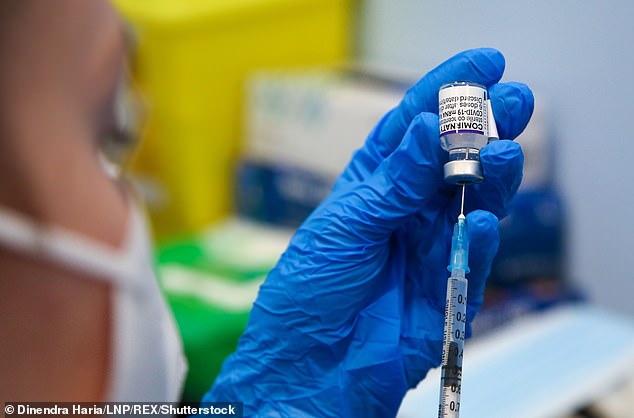 If adopted, it may theoretically mean vulnerable patients have better, longer-lasting protection against Covid.

Results have already been sent to the Government’s vaccine advisory panel, which could recommend ministers adopt the tactic this Autumn.

UK guidelines told doctors to continue treatments as normal during the first rounds of vaccines. Guides in the US said to pause for a maximum of one week.

The academics warned immuno-suppressed patients not to take any actions without first consulting their doctor.

Half of the participants saw flare-ups of their condition after pausing methotrexate, although most of these were mild.

The study, published in Lancet Respiratory Medicine, recruited 254 volunteers across England and Wales from September 30, 2021, to March 3 this year.

They had all received at least two doses of the Covid vaccine already and had been on methotrexate for at least three months.

Only people with conditions safe enough to pause treatment were included, such as those with arthritis, eczema and psoriasis — a condition that causes flaky patches of skin that form scales.

Researchers split all the participants into two groups of 127. Half had their treatment paused for two weeks, while the others continued as normal.

Downing Street today confirmed it is keeping tabs on the two Omicron variant spin-offs responsible for a recent spike in Covid infections.

Boris Johnson’s official spokesman claimed the situation was being monitored ‘very closely’ amid early signs that hospitalisations are also starting to rise. He insisted the Government was not considering imposing further curbs at this point and would stick to its ‘living with Covid’ plan.

Covid cases have nearly doubled in a fortnight in England and more than 1,000 virus-infected patients are being admitted each day.

The outbreak has been fuelled by the spread of BA.4 and BA.5, which are thought to be more infectious but just as mild as the original Omicron strain.

‘We are obviously seeing the emergence of two Omicron sub-variants, which is likely the driving cause for the rise in cases,’ the No10 spokesman said.

‘The latest data suggests these are now the dominant strains in the UK. But, so far, vaccination means those rising cases haven’t translated into a rise of severe illness or death with no increase in ICU admissions.’

They added: ‘The key thing for us is vaccination has meant the rise in cases is not translating into ICU admissions and deaths. But we’ve always been clear Covid hasn’t gone away, which is why we have always continue to urge people to come forward and receive vaccinations when they were due them.

‘As you would expect, the UK Health Security Agency (UKHSA) continue to monitor the situation very closely.’

The change was made immediately after getting their booster vaccine and doctors took blood samples to measure their Covid antibody levels.

They took samples after four weeks and 12 weeks, to track how levels changed over time.

Volunteers whose treatment was paused had 2.19 times as many of the virus-fighting proteins after four weeks, compared to those who continued as normal.

And the effect was sustained after 12 weeks, with levels still 2.11 times higher.

Experts said the medication only needed to be paused for two weeks because the immune response occurs within the first 10 days after a jab.

After the vaccine is injected, the body recognises the spike protein of the virus and starts producing antibodies.

These bind to the virus when it enters the body for real in future, preventing it from invading cells and making people ill.

Once the antibodies are made, patients can safely return to their medication without seeing their levels drop too significantly, the research suggested.

Co-author Professor Rosemary Boyton, an immunologist at Imperial College London, said the significant differences could mean immuno-compromised people are safe from Covid for much longer if they pause their treatments briefly.

Speaking at a journalist briefing, she said: ‘The thing that is most remarkable is the sustained response.

‘I was really please when I saw a sustained response at 12 weeks.

‘If you’ve got a slower waning that’s a very encouraging outcome for these patients.’

Professor Boyton added: ‘These people need as much boosting as they can get. I think it’s a really important phenomenon.

‘This study is all about showing how we can enhance the boosting so they’re in that safe level where they are protected if they meet the virus.’

Researchers said people at risk from serious flare-ups should remain on medication, even when getting boosted, because the comparative benefits of pausing are not worth it.

Lead author Professor Abhishek Abhishek, a rheumatologist at the University of Nottingham, said: ‘The beauty of this study is that its an easy-to-implement change that people can do at home.

‘But the key thing is anybody shouldn’t be doing it [on their own]. They can consult with their specialist and GP to find out what is best for them

‘If they have a disease where the flare up is severe after stopping treatment, then it would be better for them not to interrupt treatment

‘If people don’t interrupt treatment, they will still benefit from the Covid vaccine with a strong immune response.’