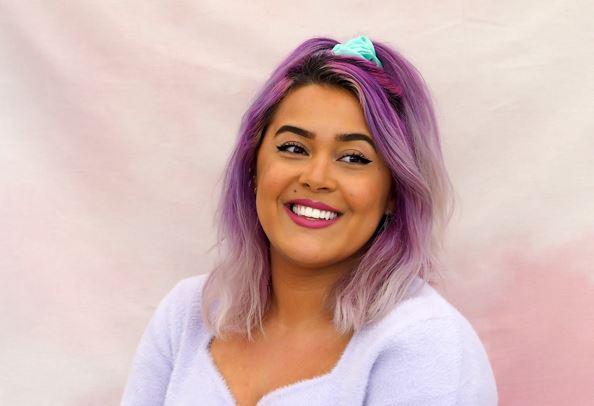 We wouldn’t expect anything less than bold and outright candour from the 29-year-old author, content creator and presenter, who has spent the vast majority of her career speaking honestly about her eating disorders, mental health struggles and subsequent recovery.

Gathering a large following as the BodyPosiPanda, Megan, who uses her platforms to preach self love and acceptance to her 1.2 million followers, is a supporter of Samaritans and has teamed up with the charity for World Suicide Prevention Day to help let everyone know it’s okay to ask about suicidal thoughts, as it could save a life.

‘Talking therapy saved my life,’ she explains. ‘I’m lucky that my family have always listened. My dad in particular, whenever I’m going through something, whenever things feel dark and I can’t find my way through them, he’s always the first person to turn up at my door unannounced and say we’re going on a walk, let’s talk about it. He’s a brilliant active listener.

‘Those talks have gotten me through some times I didn’t think I was going to get through.’

Megan admits she feels somewhat privileged to have a support system to catch her when she is low, and that for some people, there is still a stigma about being quite so candid with their frame of mind.

‘The biggest fear about opening up about mental health is that someone won’t understand and they’re going to suggest that it’s just your fault,’ she says. ‘But people don’t have to understand exactly what you’re going through in order to support you. They just need to have an open mind and an open heart and be willing to listen.

‘The right person will never make you feel like you’re the problem.’

‘A lot of people don’t want to address [suicide] head on,’ Megan continues. ‘Even if you don’t feel you can ask someone “are you suicidal?”, it’s important to get to the bottom of how people feel about being alive and their life. There’s a whole range of steps before feeling suicidal and catching someone before they’re at their lowest ebb. That’s essential.’

Megan adds that this is why she feels it’s so important that she speaks openly on her social media platforms, particularly on Instagram.

‘My goal is to bringing positivity, light and wholeness to a platform which is very good at reducing human beings to one dimensional characters,’ she explains. ‘It can be incredibly powerful to post something honestly describing how you’re feeling, and it can reach and be seen by someone who also has experienced that feeling, or is feeling low too. It stops people feeling so alone.’

That’s not to say Megan is ignorant to the many flaws with social media, and the huge impact it can have on our mental health.

With many platforms linked to causing and exacerbating depression, anxiety and loneliness, the Samaritans have repeatedly called for platforms to put resources into moderating social media pages in order not to expose impressionable young minds to harmful content.

‘I think social media is a very sharp double-edged sword,’ Megan says. ‘These days, it has become a very overwhelming place for a lot of people. There is sometimes too much going on there and I don’t think our brains are equipped to handle the sheer amount of information, opinions and trauma that is so readily available.

‘As much as there is a responsibility on influencers in what they post, they are still individuals figuring their way through this system and game which is rigged to reward people who promote perfection, filters and pretending everything is okay and shiny and fantastic.

‘The onus is on those who created the platforms and the algorithms which reward extremity in all its forms. It rewards outrage and perfection and it doesn’t hold nuance very well. They show us the things that grab our attention for the longest, and those things are always the most extreme. What gets flattened are the people behind the Insta grids.

‘We could all do with platforms that equally support the grey area and don’t constantly push things that promote an unhealthy view of other people and the world around us.’

For this year’s World Suicide Prevention Day, Metro.co.uk have teamed up with Samaritans to share stories and awareness.

As the UK’s leading suicide prevention charity, their aim is to encourage people not to be afraid to talk about suicidal thoughts and feelings if they are worried about someone.

‘Suicide can be seen as a taboo subject, so it is important people know it is OK to ask things like, “are you feeling suicidal?” as it helps the topic of suicide enter conversations more,’ says Samaritans CEO Julie Bentley.

Research has shown that asking someone if they’re suicidal won’t make things worse – it could even protect them. You can find advice and support on how to start a conversation about suicidal thoughts here.

However, Megan does praise the internet for fostering a sense of togetherness, particularly for individuals who were already feeling isolated.

‘It can feel like a community,’ she says. ‘That’s a beautiful thing as someone who grew up in a small town with not much of my own experience reflected back at me. It can be incredibly powerful.’

While Megan does urge her followers to practise self-love, she knows that, like most things, this is easier said than done.

‘It’s a practise that will sometimes go against every one of your instincts,’ she explains. ‘There will be days where we turn to self-punishment and old thought patterns about not being good enough or your brain will tell you, you don’t deserve good things.’

However, Megan believes that persistence is key: ‘The only way is to keep practising it even when you don’t believe you deserve it,’ she says.

‘Even if you have to pretend that you’re someone else you love who deserves good things. I don’t always get it right – I fall back into old patterns as well. But ultimately, we’re all just doing our best and we all deserve to be on our own side in a world where it can constantly feel we’re coming up against things that are bad for us. We can at least be on our own side through it all.’

And in those moments when you’re having a particularly difficult mental health week, it’s important to remember that there is help out there, adds Megan.

‘Mental health issues can be so disconnecting and isolating. The only way to prove that wrong is to open up and to connect to the world, to things you love, to nature, to things that make life worth living,’ she explains.

‘It’s the only way when your brain is telling you you’re completely alone – as you never are.’