Home » Health News » Man, 28, cannot walk, wear clothes or have sex due to his psoriasis

Man, 28, cannot walk, wear clothes or have sex because he ‘sheds six months’ worth of skin a WEEK’ due to his agonising psoriasis

A man claims his psoriasis causes him to shed six months’ worth of skin in just a week.

Jassem Ahmed, of London, first discovered flaky patches of skin behind his ears when he was 19, which spread to his entire body within months.

The now 28-year-old’s condition has left him in too much pain to walk and only able to wear boxer shorts, leaving him housebound for the past two months.

His disorder is so severe his nails fell out and he has been forced to live a life of celibacy, after working up a sweat during sex opened up the wounds that cover his body.

Desperate for some relief, Mr Ahmed – who is in a relationship with Serena, 29 – has tried everything from steroids to chemotherapy agents and UV-light therapy, with the latter leaving him blind for seven hours. 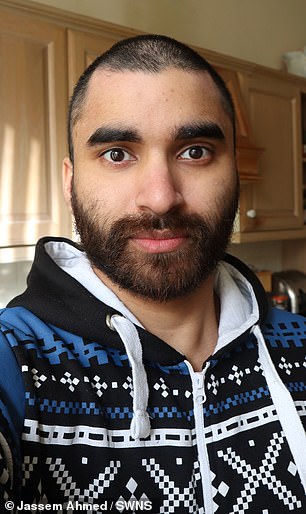 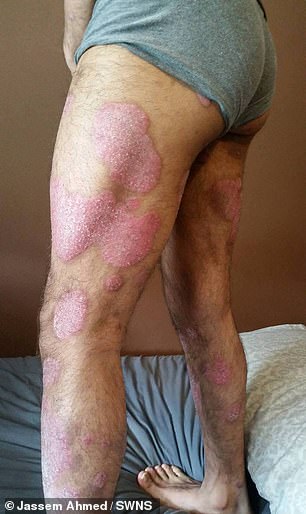 Jassem Ahmed (left) claims his psoriasis causes him to shed six months’ worth of skin in just a week. What started as flaky patches of skin behind his ears, spread to his entire body within months (pictured right are the scaly plaques). He can only wear boxer shorts due to the pain

The red, scaly patches also cover Mr Ahmed’s arms (left), which are made worse by exposure to cold weather and consuming dairy or alcohol. The condition – which covers his entire body (right) – has left Mr Ahmed celibate due to working up a sweat during sex opening his wounds

Speaking of his condition, Mr Ahmed, said: ‘I develop six months worth of skin a week and it all falls off.

‘I have psoriasis all over my feet, so I can’t walk, which sucks for me because I’m quite an active person – or I used to be.’

The last time Mr Ahmed left the house was to attend a medical appointment two months ago.

‘I went to the doctor for treatment,’ he said. ‘I’ve not had fresh air since.’

With treatments having little effect, Mr Ahmed has been forced to learn what triggers his flare-ups.

‘We’ve worked out stress is bad, which sucks, because when you have psoriasis you get really stressed, so it gets worse,’ he said. ‘It’s a vicious cycle.

Psoriasis is an autoimmune condition that affects the skin and sometimes the joints.

Around two per cent of people in the US and UK suffer from the condition.

Psoriasis occurs when a person’s skin replacement process takes place within days rather than the usual 21-to-28 days.

The accumulation of skin cells builds up to form raised plaques, which can be flaky, scaly and itchy.

Psoriasis arthritis can occur in the joints near affected skin, causing them to become tender, swollen and stiff.

Anyone can suffer, but psoriasis is more common in people in their late teens-to-early 30s or those between the ages of 50 and 60.

Psoriasis’ cause is unclear. Flare-ups can be triggered by stress, skin injury, hormonal changes and certain medications.

It is not contagious and there is no cure.

‘Clothes aggravate it too.

‘For a long time, my friends didn’t know I had psoriasis because I would hide it, with long sleeves and turtle necks and trousers.

‘But it’s so bad now I can’t really wear clothes. All I can really wear are boxers so that also means I stay around the house.’

Mr Ahmed has also cut alcohol and dairy out of his diet after learning they worsened his condition.

‘And the cold weather can make it worse, and it makes the arthritis more painful, which could be why it flared up again last March after two months in Thailand,’ he said.

Psoriatic arthritis develops in one-to-two in every five people with the skin condition.

Like psoriasis, psoriatic arthritis is thought to occur due to the immune system mistakenly attacking healthy tissue.

Mr Ahmed noticed dry, flaking skin behind his ears was spreading to his arms and legs in 2010.

But his GP reassured him it was nothing to worry about.

It was not until 2012 that the condition became so painful he went to the Royal Free Hospital’s A&E and was finally diagnosed.

Speaking of his diagnosis, Mr Ahmed said: ‘I saw one doctor, who told me to wait for a minute while he asked for another doctor’s advice.

‘A few minutes later, another doctor came in.

‘He did the same. On and on this went, until there were half a dozen of them in the room assessing me.’ 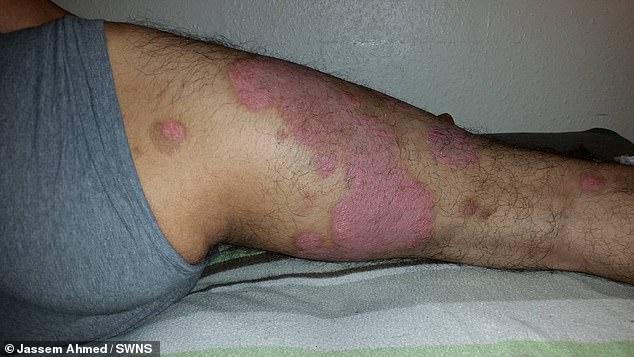 Mr Ahmed was prescribed a steroid ointment, which helped initially.

However, whenever he tried to wean himself off the lotion, his psoriasis would return ‘ten times worse’.

The ointment also triggered a condition called Cushing’s syndrome, which occurs when there is too much of the hormone cortisol in the body. Steroids can contain a man-made version of cortisol.

The condition can even be life-threatening if it causes a sufferer’s blood pressure to become dangerously high.

Mr Ahmed was forced to endure hormonal treatments for a year to rid him of the syndrome. 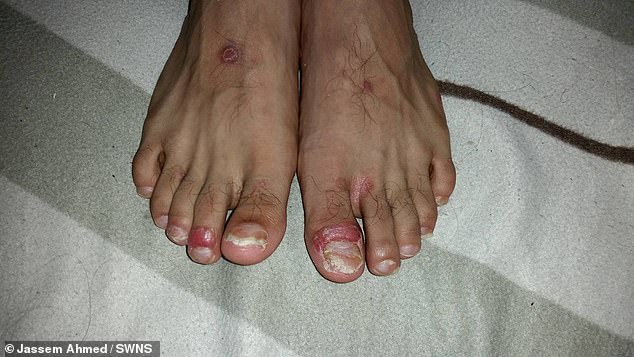 The psoriasis on his feet has left Mr Ahmed in too much pain to walk. He therefore has not left the house since going to a medical appointment two months ago

Two years into the therapy, Mr Ahmed was ‘blinded’ after he claims he was advised to remove his goggles to help relieve the psoriasis on his eyelids.

‘Because the skin on my eyelids was peeling, she told me not to wear the goggles,’ he said.

‘I had the UVB and then went home. I fell asleep. I woke up a couple of hours later in pain and totally blind.

‘It had burned me alive. It spread like a fire all over me.’

His friend Siri rushed him to A&E where tests revealed the UV light caused temporary damage to the cells on the surface of his eye.

Mr Ahmen was unable to see anything for seven hours. ‘It wasn’t black, but everything was blurry and quite dark,’ he said. 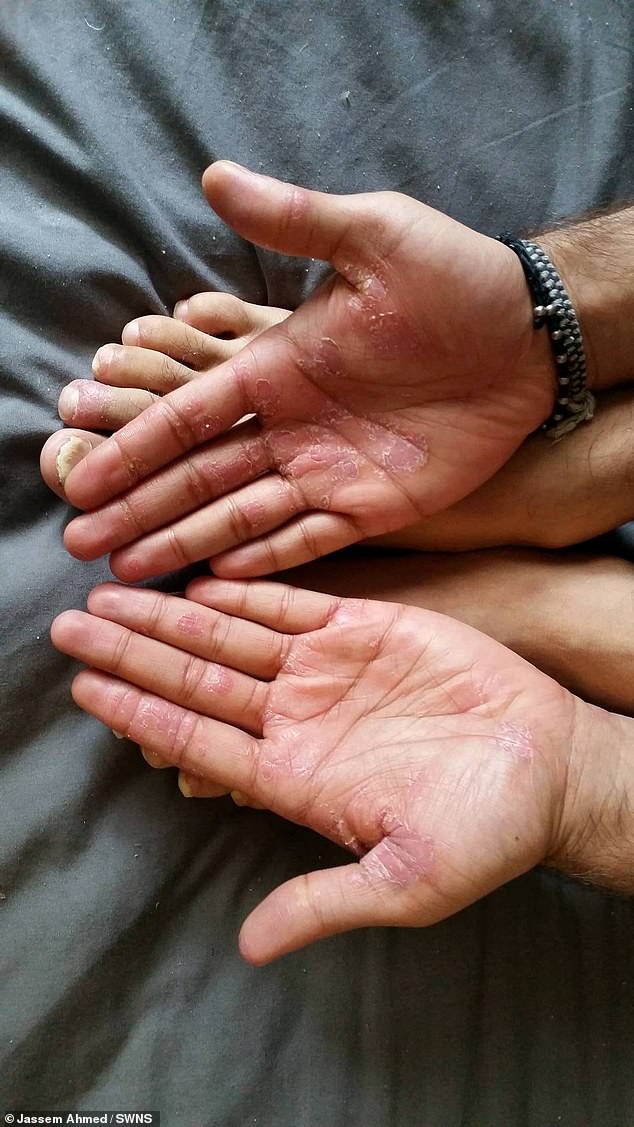 Mr Ahmed also suffers from psoriatic arthritis, which affects one-to-two in every five patients with the skin condition. The disorder, which attacks the joints, means he cannot clench his fists

Mr Ahmed even tried chemotherapy agents, which he claims left him with liver scarring.

He also gave immunosuppressants a go, which only caused him to feel even more unwell.

Despite his best efforts to find relief, Mr Ahmed’s skin has only gotten worse over the years.

His psoriatic arthritis has even left him unable to clench his fists.

Mr Ahmed is due to start a yearly course of four STELARA injections that may help his condition – but they come with a cost of up to £70,000 per jab.

STELARA ‘targets an overactive immune system and is the only biologic that by blocking two proteins, IL-23 and IL-12, which may play a role in psoriatic arthritis’, according to its website.

‘You have to try other meds to “qualify” for it,’ Mr Ahmed said. ‘And the ones you’re taking before you get to the good stuff are much worse.

‘From 2015 on, I took maybe six or seven different meds. When you hit “moderate to severe” psoriasis, nothing works but hardcore meds.’

Mr Ahmed claims he is going through a bad patch but tries his best to stay strong.

‘One of the things I have had to really come to terms with losing is hope,’ he said.  ‘Hope is the most dangerous thing to have when battling psoriasis.

‘When all my friends and family come and see me and are supportive – and they tell me there might be a miracle – I tell them not to be like that.

Mr Ahmed has produced a YouTube video ‘Trapped In My skin – A Battle With Psoriasis’ to raise awareness of the condition. It has been watched 2,400 times in just three days.

‘The response I have had from people has been amazing,’ Mr Ahmed said.

‘People said they thought they were the only ones dealing with psoriasis. Even though I feel physically bad, I’m feeling positive and mentally good.’