Home » Health News » Kitchen Garden: I just called to say I clove you

The Department of Broccoli is an inspired name for a venture developed last year at Canberra City Farm by Evan Turnbull and Katie Mills of Hughes. They appeared in a Kitchen Garden column in May 2017, when Evan was making blocks of frozen pesto from a huge crop of basil and Creole Long Storers garlic grown by Tasmanian Gourmet Garlic. 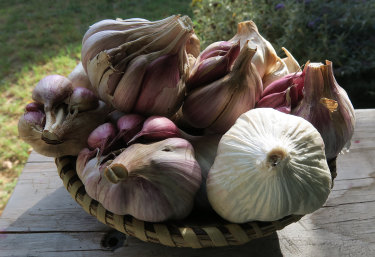 This year they hope to increase the diversity of garlic they grow by trading garlic (weight for weight) with any Canberra gardener currently growing their own cultivars. Bulbs must be at least four centimetres in diameter. They can trade Australian Purple, Rose du Var and Spanish Roja. For more details check out the ‘News’ section on their website: https://dob.millturn.com.au/

You may have met the couple manning the Canberra City Farm stall at World Wetlands Day last Saturday, selling their spinach, silverbeet, kale and garlic braids and loose garlic.

Meanwhile a gourmet endeavour has taken place. Canberran Luis Teran was featured in a Kitchen Garden article in October 2017, and I visited his farm near Lake George. Six types of garlic were planted – from a friend he had Bulgarian, Syrian, Spanish, Japanese and Vietnamese, and from Jamison Markets some Egyptian garlic.

Last year Luis planted 33 kilograms of garlic, and his hobby has resulted in a surplus of four varieties of Lake George Garlic (you can email him at [email protected]). We met at Two Before Ten in Aranda, and Luis shared with me some Spanish, Vietnamese, Egyptian and Australian varieties.

I passed on a few cloves of each to a keen cook who took them to a friend's house for a garlic tasting. They made up their own procedure, as they had no idea how the experts did it. Very small slivers were cut from a clove of each variety and eaten raw, with mouthfuls of water in between. They were amazed at the vast difference between the varieties and found the experience interesting (though the experience lasted longer in the mouth than was really enjoyed).

These are the words they used to describe each one: Australian – mild; Spanish – creamy; Vietnamese – pepper/onion; Egyptian – spicy and intense. Now they have purchased kilograms of mixed varieties from Lake George Garlic for an extended exercise in garlic tasting with friends. Their browse on the web resulted in a site from the gourmet, organic Boundary Garlic Farm in Canada, where growers and serious tasters offer ideas. Check it out at https://www.garlicfarm.ca/garlic-recipes.htm 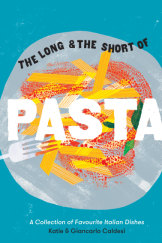 If you have had a garlic experience, email your name and address to [email protected] and let me know how it went. The most entertaining response will receive the book The Long & The Short of Pasta (Hardie Grant Books, 2018) by Katie & Giancarlo Caldesi. The authors own two Italian restaurants and a cooking school in the UK, and they have spent decades travelling in Italy. Landscape photographs by Helen Cathcart are evocative. We share below their Sicilian recipe for Sardine with garlic and wild fennel sauce from Il Palladio restaurant in Giardini Naxos.

This weekend, the first open garden for the year is the permaculture garden of Trudy Yogini in Ainslie. She was a Kitchen Garden-er in 2010 when I was impressed by her range of fruit trees and vegetables. In the 1970s Trudy came to Australia from Switzerland, where her parents had a community garden patch and she developed ideas of self-sufficient living, now realised.

Fry onion, garlic and chilli together in the oil until soft. Boil the wild fennel for 5 minutes and save the water. Squeeze the fennel to get rid of excess water and chop finely. Melt the anchovies in the oil with the onion and add the pine nuts, raisins, fennel and tomatoes. Season to taste. Add sardines and saffron mixed with 2 tbsp hot water, cover and leave to cook for 5 minutes. Break fish up a little. Boil reserved fennel water in a large pan and add the spaghetti, cook until tender, drain. Add pasta to sauce and toss. Serve in warm bowls with the almonds.