Just one exercise class a week can keep people mobile in retirement, a study suggests.

Those who took part in a weekly class designed to improve strength, balance, and stamina were less likely to see declines in their physical health years later.

The study, published in the Lancet Public Health, involved nearly 800 people aged 65 to 98 and ran across sites in Birmingham, Devon, Bath and Bristol for two years.

Researchers have called for tailored exercise classes to be rolled out on the NHS, claiming it would save the health service more money than the programmes cost.

Pressure on the NHS is set to grow with an ageing population, and currently three in 10 pensioners are classified as physically disabled. 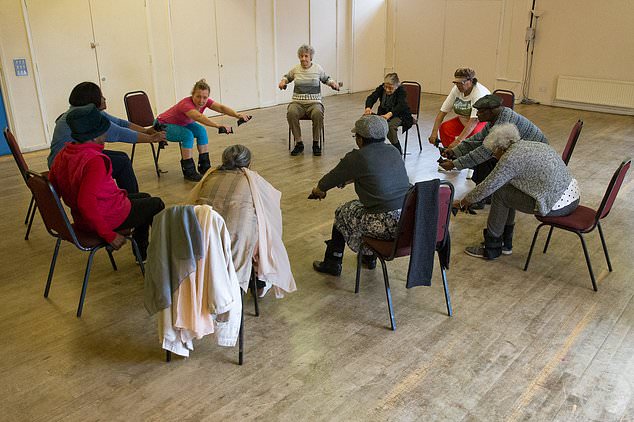 According to the study, just one tailored group exercise session a week can help to prevent decline in mobility in those aged 65 and older

The programme, known as Retirement in Action (React), would be targeted at older adults who are beginning to experience difficulties with everyday activities like climbing stairs, walking to the shop, or getting up from a chair.

It aims to prevent further decline in mobility through exercises that target strength in the legs, balance, and stamina.

Bath-based React participant, Fayek Osman, 74, said: ‘The programme improved my wellbeing as my walking ability and stair climbing are improving.

‘React has been of great benefit to me and encouraged me to continue with an advanced level of activities. It also strengthens my belief that some exercise is better than nothing at all.’

At the start of the programme, known as Retirement in Action (React), there was an average mobility score of 7.59, on a scale of between four and nine.

Those who went to the weekly classes were almost half a point higher than their peers after a year.

Professor Afroditi Stathi, React chief investigator from the University of Birmingham, said: ‘Through React we have shown that this steady decline is avoidable.

HOW MUCH EXERCISE YOU NEED

To stay healthy, adults aged 19 to 64 should try to be active daily and should do:

A good rule is that 1 minute of vigorous activity provides the same health benefits as 2 minutes of moderate activity.

One way to do your recommended 150 minutes of weekly physical activity is to do 30 minutes on 5 days every week.

All adults should also break up long periods of sitting with light activity.

‘It can be prevented, or in many cases be reversed through an exercise programme that is individually tailored and progressive.

‘At least one React exercise session per week seems sufficient to provide clinically meaningful benefits on lower limb physical function and it is highly cost-effective.

‘This is a strong public health message to give to older adults, both in the UK and around the world.’

Based on results from a large trial, the international research team from the universities of Bath, Birmingham, Exeter, and the University of the West of England (UWE) and the University of Maryland School of Medicine and Wake Forest in the US say React can help older people avoid a downward spiral of declining mobility.

The trial involved 777 people aged 65 and over who were split into either an intervention or a control group.

Those in the intervention group attended React twice a week for three months and then once a week for a further nine months.

Those in the control group attended three separate healthy ageing classes over the course of the year.

The exercise sessions were each followed by 20 minutes of refreshments and socialising to promote session attendance.

According to the results, published in two papers in the Lancet Public Health, at 24 months those who attended sessions had significantly greater mobility than those who did not.

This suggests both a short and long-term positive effect.

React participants found it easier walking, climbing stairs, and had greater independence performing daily activities, according to the researchers.

At least one strength, balance, and mobility exercise session per week was enough to provide meaningful benefits on the function of lower limbs, the study suggests.

Per person, the cost of delivering the programme was £622, but the health care savings were £725 over two years and it is thought the longer term savings could be far higher.

Dr Tristan Snowsill, of the University of Exeter, who examined the economic data from the study with Professor Antonieta Medina-Lara, said: ‘We found clear evidence that quality of life was improved in the React group.

‘This alone would most likely have been enough to justify the cost of the programme using the standard rule for cost-effectiveness.

‘To also find that React participants used fewer health and care services makes the React programme one of the clearest cases of value for money I have come across.’

The team now hope the programme can be rolled out nationwide via community activity providers based in local areas.

Dr Max Western, of the University of Bath’s Department for Health, said: ‘Given these significant results, we are calling on healthcare professionals and policymakers to draw on our findings and implement similar React sessions in other parts of the country.’

The study was funded by the National Institute for Health Research (NIHR).