With a career in theatre, effervescent nervous energy and a love of performing, Kylie Van Der Veer has always appeared bubbly and vivacious to the outside world.

Yet until five years ago, she was harbouring a secret that was slowly killing her. 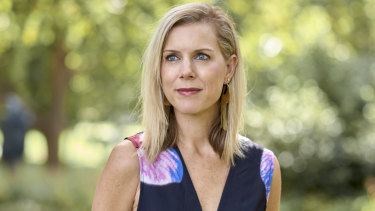 “It was a mask I put on,” the 42-year-old says of her seemingly confident self, “I was burning up inside.”

Van Der Veer was among the 10 per cent of the population who suffer an eating disorder and among the three quarters who don’t seek effective treatment.

For 20 years she alternated between exerting the savage control of starvation and spinning wildly out of control, shoving down her feelings of unworthiness so forcefully with food that she was in physical pain.

Vowing each time that she wouldn’t do it again, she bought herself gifts of jewellery and tattoos to symbolise the end of the never-ending torment, but not even the etchings of this promise into her skin was enough to make the cycle stop.

In 2012, after one binge-eating session, she ended up in an emergency room with a hernia having split the lining of her stomach.

“I hated the bingeing so much,” Ven Der Veer reveals in a new documentary, A Peace of Nourishment. “I’m just ruining my body, I’m killing myself.”

But three days after she left hospital, the cycle had started again and she stayed silent about her secret, both from the shame of it and from the terror of losing her only coping mechanism.

Today, the Melburnian says that while she saw psychologists at different points during her illness, “I’d never been honest about it”.

She would tell them “elaborate stories”, lie in the food diaries she presented to them, and assure them she had put on weight. “I almost believed it myself,” she says.

Eating disorders have the highest mortality rate of any mental illness and binge eating disorder is the most common condition, affecting more than 356,000 Australians.

Dr Phillipa Hay, a psychiatrist and the head of the Wesley Eating Disorders Centre, says binge eating disorder is characterised by feeling a “toxic” loss of control while eating and an inability to stop which can occur anywhere between once a week and several times a day. Because the initial relief of binge-eating is often followed by disgust, shame and guilt, Hay says that it typically remains a hidden disorder.

It is a hidden disorder that is not particular to any body weight, shape or size and one that affects 30 to 40 per cent of men.

“It also becomes their way of controlling,” says Hay of the reluctance of those with eating disorders to seek support and speak out.

While binge-eating, like anorexia nervosa and bulimia nervosa can occur independently, the are all typically driven by the same thing, says Hay, “a disturbed relationship with eating, the body and self regard”.

This means that it is common for people with eating disorders to move fitfully between the different types; severe restriction and bingeing for instance, as Van Der Veer did. 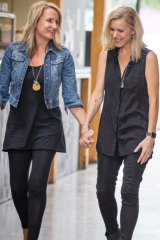 The turning point that unmasked Van Der Veer's secret was meeting her partner Annie in 2013. She witnessed the intimacy of Annie’s friendships, the sort of closeness she had never experienced because she was closed, protecting her eating disorder.

“I started to see the relationships she had with other people, and I started to get jealous,” says Van Der Veer, who traces her disorder back to being a 15-year-old who lacked self worth, was hurt by the rejection of a group of girls at school and by her step-father’s casual references to her “barge-arse”. After “ruined friendships”, health complications and decades of misery, she was sick of letting the disorder “take first place”.

Four years ago, after opening up to Annie, a filmmaker, the couple began a video diary capturing Van Der Veer’s struggle. A Peace of Nourishment is the culmination of these candid diary posts, along with her journey towards recovery as Van Der Veer spoke to experts, tried various treatments and experienced inevitable hurdles.

Christine Morgan, CEO of the Butterfly Foundation points out that in the film, because new neural pathways are being formed during recovery, relapse is “inherent” in the illness itself.

“People can make full and complete recoveries,” she says. “And that means having a good sense of your self. Living a fulfilling, whole life without worrying about the next meal or your body weight and size.”

Kylie Van Der Veer says she is now in a “really, really good place” and that having the courage to reveal her secret was the first step. “I never would have imagined I could get here.”

Compass: A Peace of Nourishment will be airing Sunday 2 June (World Eating Disorder Action Day) and Sunday 9 June at 6.30pm on ABC and ABC iview.