A former ice skater needed a double hip replacement at just 29 years old after years of people dismissing her limp as a ‘swagger’.

Kaitlyn Sharpe, now 32, was diagnosed with hip dysplasia, which occurs when the socket does not fully cover the ball portion of the upper thighbone.

Mrs Sharpe, who represented Canada in a synchronised skating competition at 17, battled daily pain ever since her teens.

She was even forced to give up the sport she loves in her mid-twenties when the discomfort become too much to bear.

It was not until an athletic therapist recommended she have an X-ray in 2015 that Mrs Sharpe, from Ontario, was finally diagnosed, aged 28. Surgeons broke the devastating news that her only option was to have both hips replaced.

She had her right hip replaced in October 2016, aged 29, with the left going under the knife the following May. She even required two bone grafts due to the extent of the damage.

Despite the ordeal, Mrs Sharpe claims her energy levels have ‘jumped up’ and she can now ‘get things done’ after the procedures have left her free of pain. 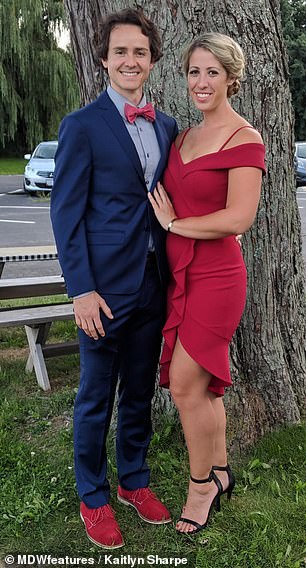 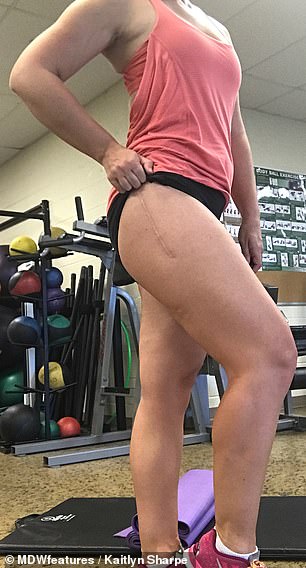 Kaitlyn Sharpe (pictured left with her husband) required a double hip replacement at 29 years old after people dismissed her limp as her trying to have swag. She is pictured right proudly showing off her scar after going under the knife in October 2016 and the following May 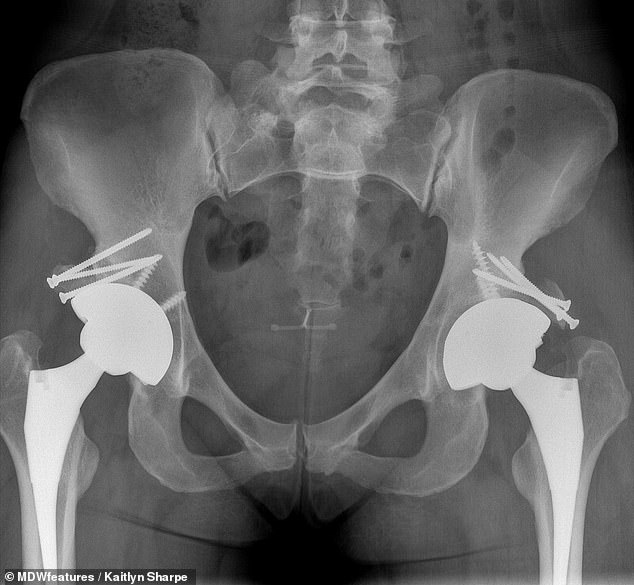 X-ray shows the pins that hold her implants in place. Doctors initially dismissed her discomfort, arguing she was too young to require a hip replacement

Speaking of her condition, Mrs Sharpe, who now runs a cleaning company with her husband, said: ‘I was born with severe hip dysplasia, but it wasn’t diagnosed until 28.

‘I don’t recall a time I didn’t have something wrong with my hips. I always had a “swagger” or a limp, even when I was younger, and it got much worse over time.

‘It wasn’t until my teens when I felt more of the physical limitations that come with hip dysplasia. My hips were always sore, stiff, and they’d pop.’

With her condition going undiagnosed for decades, physiotherapists struggled to treat her.

‘I was active and flexible due to skating, so they couldn’t figure out what was bothering me,’ Mrs Sharpe said. ‘I didn’t feel like my pain was understood and therefore not believed.’

Although she tried her best to ignore it, the discomfort eventually became too much.

‘By the time I got to university, my hip problem was worse and it continued to get worse as the years passed,’ Mrs Sharpe said.

‘I stopped skating in my mid-twenties because I would lose power in my legs and couldn’t do simple things.’

It was around this time Mrs Sharpe began working with athletic therapists.

‘They were the ones who requested X-rays and I was subsequently diagnosed with hip dysplasia,’ she said.

Pictured left at a wedding in Huntsville, Canada, in July last year, Mrs Sharpe claims her energy levels have ‘jumped up’ since the procedures. Mrs Sharpe managed to smile (right) throughout the ‘scary’ ordeal and accepted it was necessary in order for her to live a life free of pain 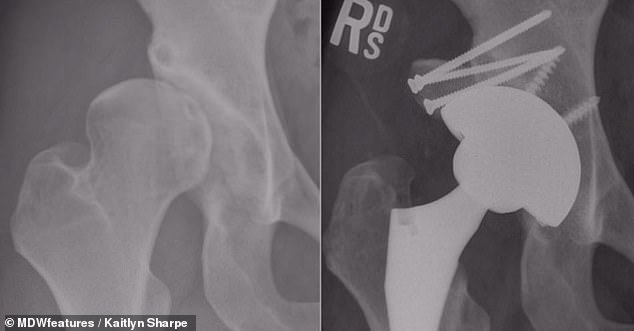 Hip dysplasia occurs when the socket does not fully cover the ball portion of the upper thighbone (seen left). Right X-ray shows the result of one of her replacements 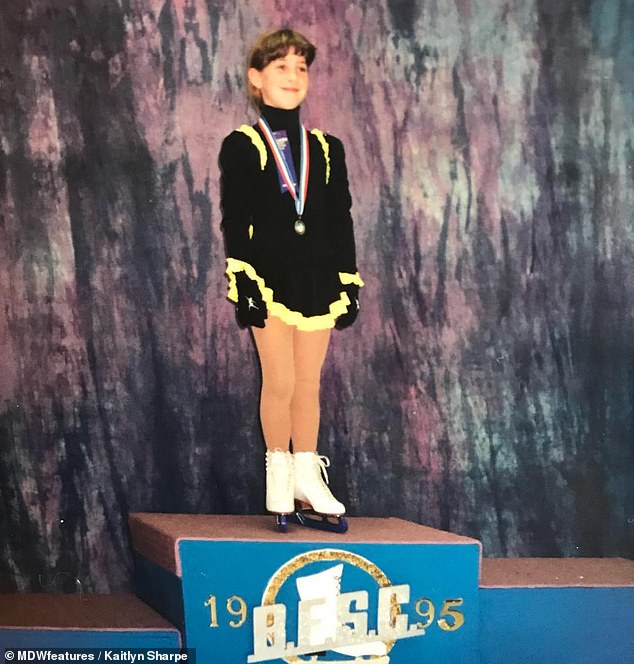 Mrs Sharpe is pictured as a child at an ice skating competition in Ontario in 1995. The sport caused her to build up strength in her legs, which masked the extent of her hip damage

WHAT IS HIP DYSPLASIA?

Hip dysplasia occurs when the hip socket is too shallow to support the ball of the joint.

Its prevalence is unclear, however, some studies suggest it affects up to one in 100 people.

Hip dysplasia is detected during adulthood in nine out of ten cases, with most not knowing they have the condition until it causes pain in later life.

These ‘silent’ cases are responsible for up to ten per cent of hip replacements in the US.

Joints that are shallow wear out faster than ‘normal’ ones. And the cartilage that is lost cannot be replaced by the body.

This causes sufferers to endure stiffness and pain as the joint wears out.

Hip dysplasia is the most common cause of arthritis of the joint in those under 50.

The first signs of hip dysplasia is usually pain and a limp. There may also be a sensation of catching, snagging or popping during activities.

This allows the remaining joint surface to be in a better position for weight bearing.

But when the joint surface is completely worn out, a double hip replacement is the only option.

Losing excess weight and walking with a cane may also help.

Although relieved to have finally gotten to the bottom of it all, Mrs Sharpe was then dealt another blow.

‘My orthopaedic surgeon told me a hip replacement was the only option,’ she said. ‘It came as a complete surprise as I was only 29.

‘Ultimately, I was in a position where I just needed to get out of pain and the fears were pushed aside because of this. This was the only option I had.’

Mrs Sharpe’s skating past led doctors to wrongly assume her condition was not as severe as it was.

‘They were surprised at how well I walked and how strong I was in the legs,’ she said. ‘They didn’t anticipate my hip joints would be as bad as they were.

‘In the first surgery, due to the bad state of my hips, they had to put the bone grafts in so there was enough bone to secure the replacement to.’

Mrs Sharpe then spent six weeks on crutches but it was months before she could move ‘as normal’.

‘After the second replacement, I knew what to expect and it made me restless at times,’ she said.

‘During this recovery I had days where I was antsy to get moving because I suddenly felt a million times better, however, I had to remind myself I still needed to heal from the surgery.’

‘I’m able to get things done and get through the day without having to sit down for a couple hours or take medication,’ she said.

‘I have seen my energy levels jump up as my body is no longer putting all its energy towards pain management.

‘Life can improve after hip replacements and even though the process is scary, the change it makes will make it all worth it.’ 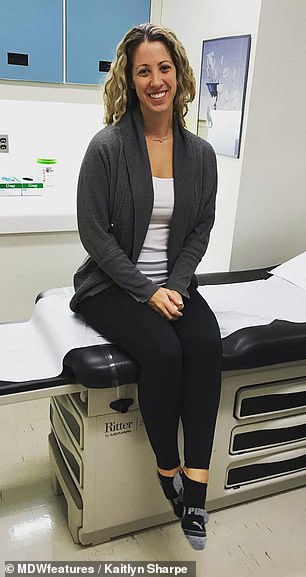 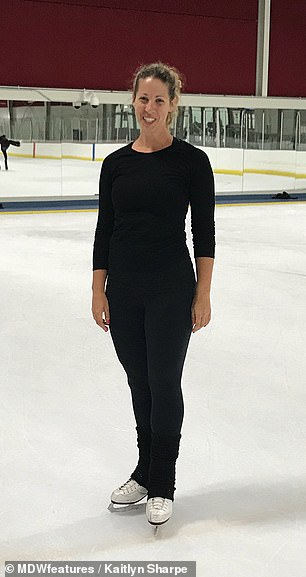 Mrs Sharpe (pictured left in hospital) stayed positive and ‘pushed her fears aside’ when doctors said replacement surgery was her only option. The discomfort eventually became too much to bear and forced Mrs Sharpe to quit ice skating (right) in her mid twenties

Mrs Sharpe (pictured left with her husband) can ‘get things done’ since having the operations. Mrs Sharpe kept smiling while in hospital (seen right) and now wants to challenge the stereotype that only young people need hip replacements

Mrs Sharpe is speaking out to challenge the stereotype that hip replacements are only for the elderly.

‘The airport is a fun one,’ she said. ‘It’s a great conversation starter when standing in a security line with all the “older” individuals at the airport who have replacements or implants.

‘I also get stares at the beach when I’m in a bathing suit and people can see my scars. I just own it, it’s a part of who I am and I’m not ashamed.’

‘I had never heard of someone having hip replacements at such a young age,’ she said.

‘The resources available only related to older individuals, like grandparents, and how they would cope with life after surgery. Not an active woman who still wanted children.

‘Just because you are younger than normal, it doesn’t mean the pain isn’t real or that hip replacements aren’t necessary.’