Bill Turnbull says to ‘get checked’ if you have cancer concerns

Gina Hickson, 29, first noticed a white glow in Darcey-Rose’s left pupil a year and a half ago – and the cloudiness persisted. 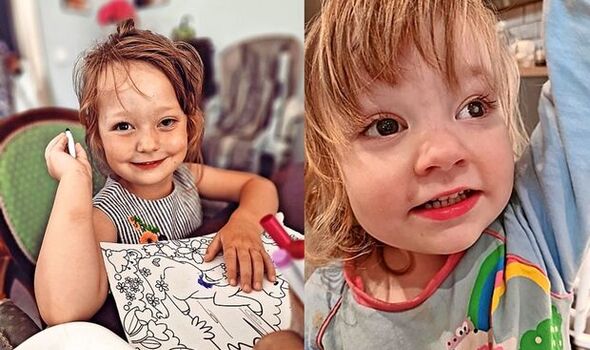 Thinking the three-year-old might need glasses, she took her daughter to the GP in February 2021.

Gina, from Westgate-on-sea, Kent, said: “We just saw a mass, like a cloud, in her eye – it would change shape depending on where her eye was directed. Initially, we thought it was ice in her eye from a snowball fight.”

After Darcey-Rose was referred to a specialist, Gina and her partner, Michael, 34, learnt she had retinoblastoma – a rare eye cancer that usually affects children under six – and were devastated.

Courageous Darcey-Rose began the first out of six rounds of chemotherapy in March last year at Great Ormond Street Hospital, London, before going into remission.

But in spring this year, medics detected more cancer – as the tumour had spread around her retina and the chemotherapy was not working as it should.

After exhausting all other options, Darcey-Rose had her left eye removed and was fitted with a prosthetic this summer.

Gina added: “When they said they were going to have to remove her eye and the choice was taken, I felt pure fear. But the operation went really well.

“Darcey-Rose did really well and she understood why she needed a special eye because of her poorly one.”

Praising her little girl’s “zest for life”, the proud mum added: “She is just the funniest sass-pot I’ve ever met. She makes me laugh every day – she’s so clever, and inquisitive.

“She loves sports and also horse riding, despite only having vision in one eye.”

In October, Gina will be running the London Marathon to raise funds for the Childhood Eye Cancer Trust to thank them for their support.